UNDER THE PEONY LANTERN:
A Cautionary Tale of Sex with the Dead

Long ago, on the first night of Obon, a widowed samurai named Ogiwara Shinnojo sat on his porch, watching the day fade into night. To his surprise, a beautiful young woman and her maid, who was carrying a lantern emblazoned with a peony, walked near. The pair paused to speak with Ogiwara, and he found the young woman's name to be Otsuyu. An instant attachment was formed, and Otsuyu promised to return the following night, at the same time. 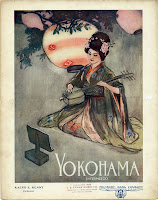 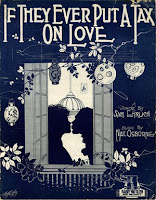 From that night onward, always at dusk, she would arrive with her maid, carrying the same Peony Lantern. Ogiwara and Otsuyu rapidly progressed in their affair, and she took him for her lover, always leaving before dawn. This relationship continued on as seasons changed, and both were very happy.

A sus- pi- cious neighbor, wondering at Ogiwara's new habit of staying awake all night and sleeping all the day, hid outside his house, peeking through a small hole in the wooden wall in order to observe the old man's nightly shenanigans. Much to his surprise, he discovered the widowed samurai passionately entwined with a skeleton, adorned with only scarce, clinging bits of rotting flesh and cobweb-infested long black hair. Half-mad, the neighbor fled screaming from the scene.

The next day he con- front- ed Ogi- wara, bringing with him a Buddhist priest who warned of the danger facing his soul. One cannot dally with the dead. Ogiwara took this to heart, and vowed to free himself from the spell of Otsuyu. With the priest's help, he surrounded his house with ofuda, strips of paper upon which are written Buddhist sutras, offering protection from the supernatural. That night, Otsuyu and her maid came as always, but they cried at the steps of his porch, unable to enter the house.

Night after night she returned, begging Ogiwara to remove the ofuda so that they may be lovers again. Slowly, the lonely old man's resistance slipped away, and one night he left his house to join his beloved.

The next morning, he was nowhere to be found. His friends looked far and wide, until the neighbor suggested they search the cemetery. At long last, they found the graves of Otsuyu and her maid, emblazoned with the same peony as on her lantern. Opening the crypts, no one was surprised to see the corpse of Ogiwara, still passionately entwined with his skeletal lover.

posted by lotusgreen at 8:59 PM

Ah!How bluesy but beautiful love story of ghost and humanity .

In Taiwan, a wisecracking saying: "death under peony, even ghosts are jolly".Jojojo!also peony!is it a coincidence again?

i love these pictures ,your daily articles and informations increasingly rich and wonderful, i wish i had a better ability to read and can fully explained how enjoyment to read these.

Thank you very much.

What a joy blogging can be. Great blog, I shall return if I may.

hp--i love your comment! to describe this as bluesy is quite creative in itself. i don't think you give yourself enough credit; you seem to communicate in english beautifully.

and it is always interesting to me to learn these correspondences between china and japan.

robert--so nice to see you again! thanks so much for the kind words; i agree about blogging, each of us building the world in our particular ways.

This sounds so similar to the Liaozhai Zhiyi, or Strange Stories from a Chinese Studio.

The only difference I feel is that if this tale were Chinese, the ghost might not be accompanied by a maid.

thanks for your comment, chris. yeah--i wondered about the maid. what was her purpose in the story?

but i'm not surprised that it's related to a chinese tale. harlequinpan related something similar.

any time you have this kind of perspective, background, whatever, i really value it when you post it here.

It does sound a bit familiar (maybe something from Lafcadio Hearn?) but in any case a very fine spooky tale. I daresay the old man wasn't too sorry to rejoin his lover, but I think I'll be avoiding sex with the dead myself.

meanwhile, a little further research turned up this and proved conclusively how priviledged i am to have such smart visitors to this blog.