(from yesterday) the homemaker magazines and others....

it was a time of revolution in the arts. the line between 'artist' and 'illustrator' became blurred as the creators of magazine covers became collectible artists.

but additionally, i see these magazines, in that time, as kind of like oprah. they introduced the newest things to its readers, brought them the culture, the creativity, and the latest craze in a fancy package, almost like a gift. 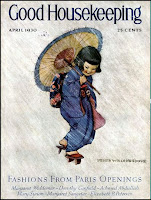 i picture edna, one of millions of farm wives way out in the country, sitting on a stool in her kitchen alone, listening to the radio (if they can get a signal out there), and taking a break from her chores. she's just received her latest issue of modern priscilla, with its wonderful patterns, and stories, and pictures. she's connected to the world. she closes her eyes in reverie, dreaming of the blue silk she saved for and bought. she's embroidering it at night from a pattern in the magazine. how beautiful she will be for george in her very own kimono.

none of these magazine covers illustrate japonisme in style, but they have the word 'craze' written all over them. the popularizing of the orient. 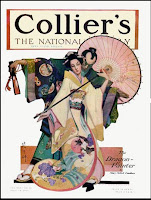 (and yes, i do know that some of the images from yesterday and today illustrate chinese rather than japanese images, but i've found so many comments illustrating a total lack of awareness of any difference -- sheet music for 'chinese cherry blossom' featuring a woman clearly in the garb of a japanese courtesan -- that i think they can be included without apology.)

(the popular mechanics, which i just cannot explain, comes from here.)

posted by lotusgreen at 2:44 PM