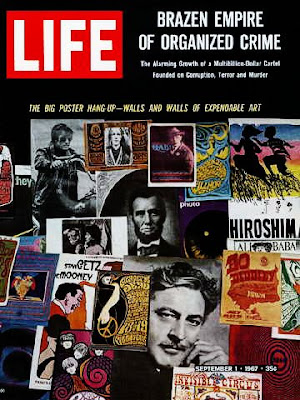 roxy reminded me in her comment after yesterday's post that many of you probably never thought about that moment in US history when everything changed: the first baby- boomers graduated from high school, everyone started smoking dope, and you could buy posters everywhere. posters were such a big new thing that life magazine devoted a whole cover story to the subject. 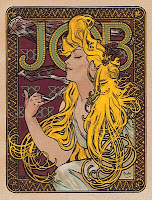 i was aware of this, and wondered if there had been some technological advancement had occurred which allowed the manufacture and price of big beautiful four-color posters to be within nearly anyone's reach; i recalled that part of what began the first poster craze was, in part, just this kind of thing. 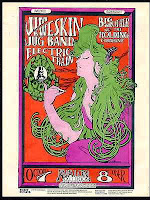 i asked the brilliant poster designer and printer, david goines, about this and i'll quote you some of his response. One thing that may have had an influence was that while most printing was done by letterpress (newspapers, magazines & books), printing of large images, especially complex ones, such as maps, and cheap ones, such as boxing posters, was done by offset lithography, which was the poor cousin of the much more expensive letterpress process.

The intermediate process of Mimeograph was used for text-only (sometimes with minimal illustration) such as school newspapers, leaflets, class handouts, but wasn't really useful for images. Ditto (spirit duplication) was useful for very small quantities of illustrated class- room handouts (grade-school teachers used it a lot). 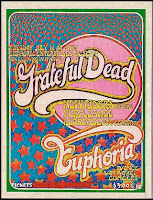 In the early 1960s technological innovations began to make offset lithography not only competitive with mimeograph, but actually replaced it by around 1966. (more from david to come....)

Interest in Art Nouveau underwent a revival in the Seventies when reproductions of posters of Sarah Bernhardt by the Czech designer Alphonse Mucha became popular. The Art Nouveau revival is understandable in the context of the magpie approach of Pop graphic designers. Spurred on by museum exhibitions of the work of Alphonse Mucha and Aubrey Beardsley, British designers took up the style to the extent that Queen magazine was describing an ‘Art Nouveau fever’ in 1964. 1

In its brief heyday around the turn of the century, the tendrilous international style of art nouveau swept over Europe, dominating the design of everything from the Paris Metro stations to ordinary knives and forks. The inevitable reaction against it was particularly violent, and the whole movement was dismissed as a rather ludicrous, if temporary, aberration. Artists like Alphonse Mucha, if remembered at all, seemed as dated as gaslight and their work as decadent as Oscar Wilde's sun flower. But lately art nouveau has been getting a new look. Manhattan's Museum of Modern Art had a big show of it three years ago, and in London last week Alphonse Mucha was once again a big name with simultaneous shows at the Grosvenor and Jeffress Galleries and the Victoria and Albert Museum. 2

i'll be examining further these mentioned exhibitions, and the particular effects they had depending on where they were held. and there were many other regional happenstances that bear mentioning. to come. we'll look also at the wider picture of art nouveau, as well as more on posters.

david byrd is a brilliant poster artist who has worked in many media and in many styles. as we've seen, mucha's style was a prototype for many of the artists, and for some even more than that. david's web site says this one was inspired by a muybridge series, but i don't know.

check out another mucha piece, some preliminary drawings 4, and let me know what you think. even if you agree with me and find it irredeemably mucha-ish, the hand that made it is clearly also a master.

you also may be beginning to understand how many questions are involved in this one. not just the return of mucha himself, but of his many shadows too. 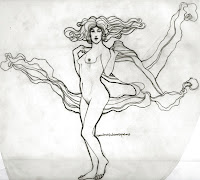 temporary aberration? uh... no. i just don't think so.

posted by lotusgreen at 1:44 PM

I adore your blog! The last two posts have been amazing. I am a huge art nouveau fan and also love the revival stuff from the 60's, with its vivid, neon colors...

thank you so much, tara! so glad you dropped by!

Another great set of posts. Thanks for sharing.

thanks, dominic! did you know these artists?

amazing! I can't get enough of these posters!

Gorgeous! Interesting printing processes. Dittos! I haven't thought of those in ages. We used to get them in class still moist and giving off strange fumes!

i don't know if i can exactly remember dittos, but i can sort of remember mimeograph machines--always very messy.

it's weird, but I guess it's the 3rd or 4th time that I don't get any notification in my email about my comments being published, or that you have answered. I don't like that, hmmm. I wonder why it happens, some blogger bug maybe.

bummer, rox! i remember one time when i discovered someone's responses had been going to junkmail, for some reason.

but yours are not there, in the spam folder, I've checked! I don't get them at all :-(

thank you so much, poster printing!!