Tamara Platonovna Karsavina, one of the greatest dancers of the Ballets Russes of Serge Diaghilev, was born in St. Petersburg on March 10, 1885, the daughter of dancer Platon Karsavin. Tamara became a legend in her own life time. Her technical perfection, wit, rare intelligence, and deep feeling made her a prima ballerina for all times. 1

A whole day was spent in preparing for the journey, and when November 4th came, shortly before mid- night my provisions were packed upon my camels, with an extra load of fowls and one of fruit, while on the hump of the last camel of my caravan were perched, in a wooden box made comfortable with straw and cotton-wool, two pretty Persian kittens, aged respectively three weeks and four weeks, which I had purchased in Kerman, and which, as we shall see, lived through a great many adventures and sufferings, and actually reached London safe and sound, proving themselves to be the most wonderful and agreeable little travelling companions imaginable. One was christened "Kerman," the other "Zeris." 2 --A. HENRY SAVAGE LANDOR 1902 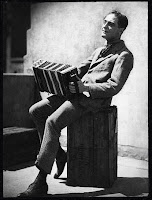 " ... the camera was carried on my way to work. Over the harbour in the ferry. Through the streets of Sydney with its old build- ings and its everyday scenes of life and bustle. By sunshine, in the rain and through fogs and mists!" 3 --Harold Cazneaux,
letter to Jack Cato, ca. 1920

From a Poem written to Mercedes de Acosta by Isadora Duncan in 1927, (quoted by Hugo Vickers in "Loving Garbo")


....A slender body, hands soft and white
For the service of my delight.
Two sprouting breasts
Round and sweet
Invite my hungry mouth to eat.
From whence two nipples firm and pink
Persuade my thirsty soul to drink
And lower still a secret place
Where I'd fain hide my loving face....." 4

posted by lotusgreen at 7:30 PM

Very interesting. Do you own a copy of Mercede's book? It is hard to find. I have been looking for it.

no! to tell the truth, i don't think i'd heard of her before.