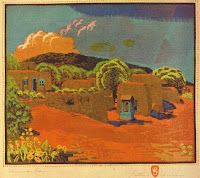 This is a delicious evening, when the whole body is one sense, and imbibes delight through every pore. I go and come with a strange liberty in Nature, a part of herself. 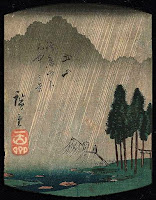 While I enjoy the friendship of the seasons I trust that nothing can make life a burden to me. The gentle rain which waters my beans and keeps me in the house today is not drear and melancholy, but good for me too. Though it prevents my hoeing them, it is of far more worth than my hoeing. If it should continue so long as to cause the seeds to rot in the ground and destroy the potatoes in the low lands, it would still be good for the grass on the uplands, and, being good for the grass, it would be good for me.

Some of my pleasantest hours were during the long rain-storms in the spring or fall, which confined me to the house for the afternoon as well as the forenoon, soothed by their ceaseless roar and pelting; when an early twilight ushered in a long evening in which many thoughts had time to take root and unfold themselves.

In one heavy thunder-shower the lightning struck a large pitch pine across the pond, making a very conspicuous and perfectly regular spiral groove from top to bottom, an inch or more deep, and four or five inches wide, as you would groove a walking-stick. I passed it again the other day, and was struck with awe on looking up and beholding that mark, now more distinct than ever, where a terrific and resistless bolt came down out of the harmless sky eight years ago.

Men frequently say to me, "I should think you would feel lonesome down there, and want to be nearer to folks, rainy and snowy days and nights especially." I am tempted to reply to such — This whole earth which we inhabit is but a point in space. How far apart, think you, dwell the two most distant inhabitants of yonder star, the breadth of whose disk cannot be appreciated by our instruments? Why should I feel lonely? is not our planet in the Milky Way? This which you put seems to me not to be the most important question. What sort of space is that which separates a man from his fellows and makes him solitary?

I find it wholesome to be alone the greater part of the time. To be in company, even with the best, is soon wearisome and dissipating. I love to be alone. I never found the companion that was so companionable as solitude. We are for the most part more lonely when we go abroad among men than when we stay in our chambers. A man thinking or working is always alone, let him be where he will. Solitude is not measured by the miles of space that intervene between a man and his fellows. 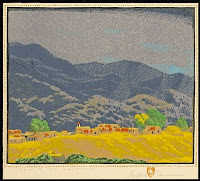 The really diligent student in one of the crowded hives of Cambridge College is as solitary as a dervish in the desert. The farmer can work alone in the field or the woods all day, hoeing or chopping, and not feel lonesome, because he is employed; but when he comes home at night he cannot sit down in a room alone, at the mercy of his thoughts, but must be where he can "see the folks," and recreate, and as he thinks remunerate himself for his day's solitude; and hence he wonders how the student can sit alone in the house all night and most of the day without ennui and "the blues"; but he does not realize that the student, though in the house, is still at work in his field, and chopping in his woods, as the farmer in his, and in turn seeks the same recreation and society that the latter does, though it may be a more condensed form of it. 1
Henry David Thoreau

I fell in love with the Morning Hair Lady.
Thank you.
D.

you're welcome, d --but from where have you found this lady?