in continuing with my supposition that an important, perhaps the most important, aspect of culture is religion, i wish to begin to look at, for ease's sake, some differ- ences between christianity and buddhism. it's clear that i'm not a scholar on this subject, and i know that some of you are, so please add your knowledge, and please don't judge me too harshly for my inevitable errors.

while both religious traditions have some form of simplicity at heart, both have their garish elements as well. but this will not be a discussion of externals, but rather a discussion of how both deal with the internal reaches of the spirit.

let us look first at solitude, at our percep- tions, and at "realities." when a solitary figure is featured, what is your reaction, and what does that depend on? are different internal processes inferred for a woman than for a man? 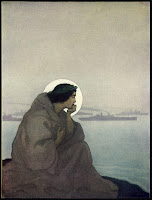 i find one of my own internal prejudices in noting that she looks dejected while he looks creative. is the difference in the images or in myself?

while both of these images are by west- erners, one is of a monk in japan by an artist (orlik) who spent much time there. by my perception, i see him as walking in contemplation, while in the other i imagine someone returning home with the groceries, hurrying because of the cold. 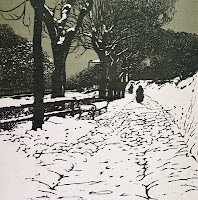 why the differences? again, are they inherent in the images or in me?

(though this next might seem like a change of subject, i think this will all tie together in the end.)

so then let us look at the simi- larities in the origins of the two religions. i find it striking how similar these sound.

At the beginning of his public ministry Jesus of Nazareth subjected himself for forty days to physical and spiritual testing in the desert; and the Gospels record other times in which he retired for periods of solitary prayer. In the early church, individuals would live ascetic lives, though usually on the outskirts of civilization. 1

jesus said, "Don't go into fear; don't get overly stuck in the judgmental functioning of the mind; consider the lilies; learn to love your neighbor with the same love as you give yourself; love one another as I have loved you; know the truth, and the truth will set you free; be perfect, just as God is perfect... be still ... and know ...." 2

the buddha said, "Do not overrate what you have received, nor envy others. He who envies others does not obtain peace of mind." 4

"Consider others as yourself." 5

"Peace comes from within. Do not seek it without." 6 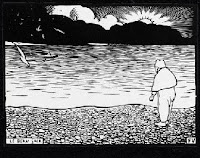 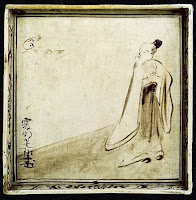 another difference, in practice, is the reason for that practice. christians' goal is the sweet hereafter. buddhists are more interested in the sweet now.

fascinatingly, there are websites and books galore on all of the parallels between the two men, the two traditions. thai buddhist monk and teacher thich nhat hanh has written and edited several himself. just google jesus and buddha and you will have days of reading at your fingertips.

so it seems that the differences began to occur as christianity began to change in the centuries after christ's death. (i know -- this isn't news -- but it seemed important to mention at this point of the explor- ation.) eventually, churches were moved to the center of town. eventually, wars were fought in christ's name. eventually, people were scorned or banished for any number of "sins" that had developed in those centuries.

these changes never developed in buddhism.

so what of solitude? while buddhism continued its embrace of the practice, christianity became more "community oriented." the practices following the buddha's teachings remained pretty much the same, but the concept of finding god, and truth, and be set free by it has turned, all too often, into an iron-clad institution: find our god, our truth, or we will see to it that you have no freedom.

the externalizing of god, in the west, led to a certainty that god was "out there," which was never what jesus really taught. yes, things are changing. meditation has become in important part of the religious traditions of the west. and there wouldn't be a market for all those books if people were not now recognizing their needs in a new way. but how did the divergence happen, the one that i'm positing is the reason for the divergence in the arts. i'll try to take that on next.

posted by lotusgreen at 4:44 PM

Glad I came across this piece this morning, & a fine selection of images. I've a short enough piece on Idolatry you might find interesting, or at least related:

i'm glad too -- thank you andrew. yes, your piece is quite interesting.