From the time of the Columbian Exposition in Chicago in 1893 with the Japanese "Ho-o-Den" display, the famous American architect Frank Lloyd Wright was influenced in some ways by Japanese art. Wright reported that he found Japanese art "nearer to the earth . . . than any European civilization alive or dead."

....The Thomas Hardy House in Wisconsin, was done in a Japanese style. 1 [While] Wright freely acknowledged an important  philosophical debt to Japanese art, and to the wood­ block print in particular, he consistently rejected  suggestions that Japanese architecture had any direct  impact on his work. Throughout his career Wright maintained that he found in Japanese culture  not the inspiration which many suspected, but  merely confirmation of many of his own 'organic'  design principles. English Arts and Crafts architect C. R. Ashbee observed that "The Japanese influence is very clear. Wright is obvi­ ously trying to adapt Japanese forms to the United States,  even though the artist denies it and the influence must be  unconscious. 2 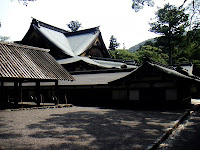 As early as 1878, when Morse returned from Japan with photographs of buildings, he began a series of popular lectures that culminated at MIT in 1882, at just about the time that H.H. Richardson's style began to change. 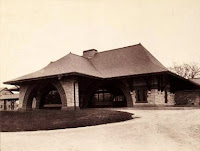 Explicit and direct references to Morse's Japan, with compelling visual correspondences of Richardson's railroad stations to images in Morse's collection, is not surprising in view of other connections between Richardson's office and the Japanese vogue of the day. Morse's book was dedicated to William Sturgis Bigelow, who was the son of Richardson's client and a leading authority of Japan. 3

Excellent examples of bungalows with a Japanese character can be found in the works of the brothers Charles Sumner and Henry Mather Greene. Their basis of design was formulated from influences of H.H. Richardson, with whom they once had a slight association. 4

The Greenes set out to California in 1893 to visit their parents in Pasadena. Along the way they [also] attended the Colombian Exposition in Chicago. There they saw Japan's official exhibit, a re-creation of the Ho-O-Do of Byodo-In, a Buddhist Temple of the Fujiwara period. 5 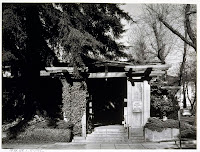 Bernard Maybeck was at the 1893 Columbian Exhibition (400 years since Columbus "discovered America") in Chicago as well, helping to create the building that represented California.

Is it surprising that buildings of some architects of that moment are compared to Shinto Shrines in Ise? A collection of buildings, a collection of similarities. The connection is obvious. Oh, and Richardson? I don't know if he was there, but i do know he was from Chicago!

posted by lotusgreen at 6:56 AM

Interesting article. I think Wright's ego certainly couldn't entertain any concept that he might have been influenced from outside his own head.

Also interesting that Ashbee saw the obvious similarities. I had not heard of his criticism of Wright before, so that was new to me.

As to Greene & Greene, personally I think their houses are infinitely superior to Wright's, drop dead gorgeous in fact. I know that is a biased statement, but I can't help it, they are!

I look forward to the second part!

yeah--i adore the g&g houses too. there's a great book 'greene and greene masterpieces" in which i saw images of houses i hadn't seen before along with incomprehensible, heartbreaking tales of the breaking off and selling so many bits and pieces of so many homes.

but i gotta say -- the more i look at flw's work, the more impressed i get.