i have done very little translating but i did once write an essay on it, and the devilish difficulty of it as an art. i now know whereof i spoke.

in another of his inspirations from the japanese, hoytema added poetry to this year's images. i was half-way through google-translating them when i realized that in the dutch, they rhymed.

so part of my englishifying them was once or twice looking for the rhyme, but more often sifting through what i thought they were to have meant, and making more clear the connotations in english. corrections will be welcomed. many of them just don't make sense to me, but i like them anyway.

From the flowering branch,
the thrush sings with all his might.

The magpie calls from the forest:
"Do the door, sweetheart, do the door again!" 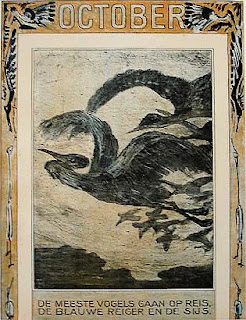 Though most birds migrate away;
the blue heron and the siskin stay.

Now pull it back through the dark night,
the softest sounds: "luwiet," "loewite."

From snow outside the house of men
sounds the clear song of the wren.

posted by lotusgreen at 2:03 PM

I absolutely LOVE these as I am an avid bird lover.

thank you so much, yoli -- me too! the cedar waxwings landed today in great numbers!

I agree that translating is difficult and as much an art as anything. Dutch is a difficult language, amazing you figured out about the rhyming lines.

I lived in Holland for a year once and didn't attune myself to it. I admire people who learn languages easily and will never understand why we don't teach our children languages in the primary years.

thanks princess! i didn't know you did that. it sounds interesting, but i know how odd the feeling is when the sync-ing doesn't happen.

thing is, if they'd taught you a language from infancy, it probably wouldn't have been dutch!

i will tell you, though, i find myself inordinately proud of having learned how to spell names like nieuwenhuis and dijsselhof from memory. it is the funnest language in print, i think, and a surprising number of words are much like english, but beyond that thin surface, it's baffling to me.

yeah, i suddenly noticed on may, then went and checked on all of them! so interesting.

These images are beautiful and that you translated from the Japanese is admirable. That you found they rhymed in Dutch was surprising. They are delightful. Thank you.

now, i didn't translate from japanese, and if you'll look at those little sayings at the bottoms of the pictures, and look at the words at the end of each line, and you'll see it too!

interestingly, this was the only year he did this.