i have always loved calendars, things that mark time,
categories. in my life i have made made a number of them:
the first one was inspired by an exhibition at the berkeley art museum.
the point of the show was that along with the images
were words from the artist as part of the piece.
one was a calendar with the artist's life's events.
i made the lily pond and family history calendar.
my dad loved it.

the second one was a black & white calendar of my photos
of my friends, mostly women, mostly naked.

the third was a poster calendar
designed to remind women to do breast self exam
every month. 1981. i still have a whole unopened carton! 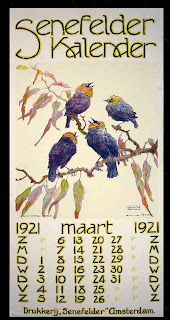 another way i've organized my impressions
has been to write down what bird arrives when,
what blossoms when, and like that.

for example this year everything's a bit late.
the robins and waxwings have only just recently
come for the red berries on the cotoneaster. 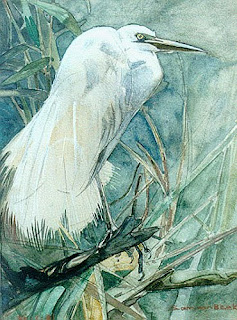 i also know the species who don't come anymore.
this year is the first one with no golden-crowned sparrows
accompanying the white-crowneds. haven't seen pine siskins
in years, nor song sparrows (in my yard). 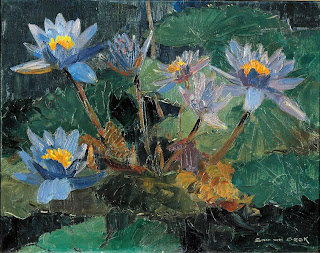 once night many years ago there were dueling mockingbirds
atop the telephone poles, trading songs. i rarely hear even one, now.
trees have been cut down. other species have claimed the property.
due to the fires in the hills there are now crows and ravens and hawks
down here in the flatlands; they used to just be in the hills.

and then there's climate.

posted by lotusgreen at 9:58 PM

I'm going to sound like a broken record...but all this stuff from the early 20th century has an elegance to it missing from today's stuff. Don't know if my art rectifies that in any way...but I guess it gives me something to shoot for...what was old is now new kinda thing...

My backyard is weird (& currently looks like a war zone thanks to record snow falls)...but yeah...we got a few birds last year I can't remember ever seeing before (evening gross
beaks), but it's been years since I've heard a whip-poor-will- not for lack of mosquitoes...but the woods...sadly, that's a different story.

it truly does, evan. you've chosen a great inspiration.

i would like to better understand 'fashion,' ie. when did the line lose that elegance? now i can explain it in terms of industrialism et al, but what about the inner soul of the artist?

what is it about this style that it just wouldn't be done nowadays? and even if it's very closely done, it seems to be all shined up or something.

it's neat that you're seeing new birds!

Such a nice style you have! The water lilies are so soft and cool...I included you in my favorite blogs last week.

oh thank you theresa. it's too bad so little is available by this artist that i could find -- but i do like his choices of subject, and his colors.