japonisme: the actual clothes: photos that tell the tale

the actual clothes: photos that tell the tale

the camera had only recently been invented, and was, in fact, an influence on art and the arts veering from a prettified realism. so we are lucky there are any photos at all of women's fashion from this time.

In 1907, according to Common Threads, A Parade of American Clothing, Anna G. Noyes, who many considered an eccentric, pleaded for a new order of clothing in which women didn't need help getting in and out of clothes, a method of equally distributing the weight of clothes so they would be and feel as natural to the body as skin and bones and an overall design based on the natural curves of the body. She also wanted the right for women to select textile colors best suited to their coloring, to choose fabrics for garments which touched the body that were sanitary and could easily be washed and the elimination of dirty starch; to wear gloves instead of bothersome muffs in the winter, more becoming hats less prone to ridicule, better fitting shoes and the elimination of all jewelry and fur in warm climates which prevented fresh air from penetrating the body. 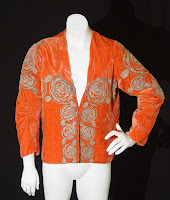 But most of all she touched upon the very heart of reform by campaigning to eliminate articles of clothing that required unsafe or unhealthy working conditions for workers, a subject many were advocating but went largely ignored by local city officials -- the tragic Triangle Shirtwaist Company fire in New York City in 1911 would forever be a haunting reminder of those unheeded warnings. 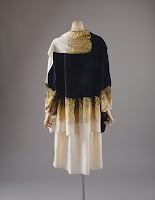 Thus the timing was right for the entrance of the kimono American style - its structure and simplicity embodied an age of new spirit and freedom. Although fashion reform was slow to move until the early 1920s as society makers continued to decree that woman should be corseted, stuffed and layered, the carefree look was making serious inroads. (more)

thanks, rolandmechael! and thanks for stopping by

I love this past period, for the art, the clothes... Did you see the last François Ozon's film? (Angel) Dresses are incredible!

oh me too: the edwardian/weiner werkstatte clothes..... i want a whole wardrobe!

no--but thanks for the tip! i'll check it out.