japonisme: where the lanterns glow

where the lanterns glow 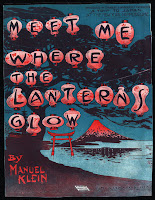 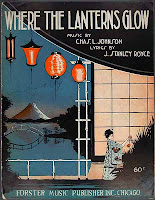 At the beginning of the century, during the 'Meiji' era in Japan, Japan exported many singers and musicians to the west, who had a great deal of influence on turn-of- the-century composers, especially in Europe (Puccini, Ravel and Debussy being the most prominent.) In the U. S., music with "oriental" titles began to appear, but in most cases, this was an excuse to produce staccato notes in the upper register of the piano. 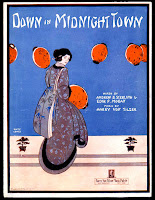 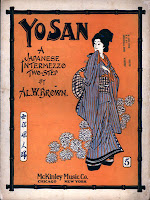 ["Yo-San, A Japanese Intermezzo Two Step"] is the exception, and actually echoes a Japanese popular song of the era (which itself had been influenced by American music of thirty years before). [note the various different songs with similar or exact titles. note the 'half-will- bradley-half-kimono dress.] 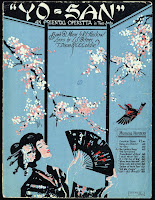 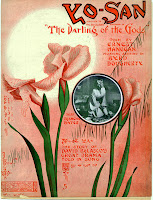 The end of the nineteenth century and the beginning of the twentieth saw a great deal of interest in Japanese culture in the arts. Puccini wrote "Madame Butterfly", Gilbert & Sullivan wrote "The Mikado" and singers and dancers from Japan toured America and Europe to tremendous critical acclaim. 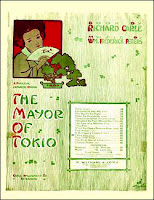 The popular arts were not immune from this interest: prior to 1905 the musical play "The Mayor of Tokio" played all over the country to large crowds, and the overture was recorded by Vess Ossman, playing banjo for Columbia Records. There was even a popular candy-bar called "Sa-Yo" with the picture of a Japanese maid on the wrapper. This ragtime excursion into orientalia shows the tremendous breadth of Henry Lodge's talent. Starting with themes from "The Mikado" he quickly develops a gentle syncopation which manages to sustain the oriental feeling while becoming a robust rag. (more) 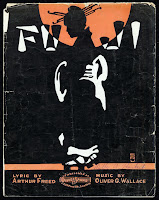 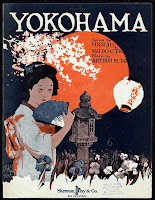 in fact, much of what was written, of what is shown here (just a begin- ning), is a fine combination of ragtime from the african south, "tin pan alley" from the eastern european northeast, and, well.... japonisme -- the asian west coast. immigrants celebrating diversity.