this one they do know, it's from the late 1800s, and it's by bairei kono, creator of lovely, simple images of fruits, vegetables, flowers, puppies, and other familiars of everyday life, seen unadorned, and beautifully.

in 1893, keika hasegawa put out his '100 chrysanthemums.' i can find no reference to anything else he ever did, nor anything about him. but i like his mums.

it was 1904 when seguy put out his art nouveau flower pouchoirs, and lithographs. japonisme in full... uh... bloom.

jo worked in the 1920s and 30s in japan, though it has been suggested that he may not be japanese. but don't you love that little grasshopper.

shodo kawarazaki's two prints come out of the 1950s, a tradition worth keeping, kept. 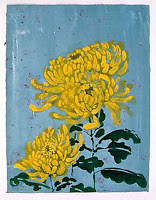 and this is from 1995, and not from japan at all, but much of this artist's work shows a clear understanding of the sensibility. 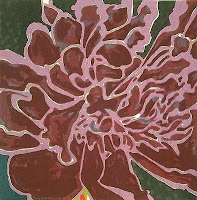 many thanks to cerf à paillettes for turning me on to robert kushner.

when japan did what it inadvertently did to teach us seeing, it left a lasting impression.

posted by lotusgreen at 2:21 PM

Oh, love these Chrysanthemums. Thanks for mentioning that post; thought I had linked it as it is my practice to do so.

I really love your blog. Amazing content. I was wondering, is there a way I can look at older posts you have made? I cant seem to find out how to search your archives of this blog? THanks!

princess--i just suddenly made this connection...: have you ever read The Pillow Boy of the Lady Onogoro by Alison Fell? i just got this flash that you might like it... but honestly it's been many years since i read it so forgive me if it's a poor fit!

hi nothing sacred--thank you so much! i just realized that if one follows a link to one post, the archives list doesn't show up in the sidebar, so if you go to http://japonismeblog.com/, i think it'll work.

there also should be the search blank at the top....