japonisme: beauty is not pretty

beauty is not pretty

Gei literally trans- lates as "art," and although these women were once expected to have sex with loyal patrons, they were predomin- antly known for their skills at storytelling, dancing, painting and musicianship, as well as their exotic looks.

Their bodies were and are their art, but screenwriter [of 'memoirs of a geisha'] Robin Swicord says there is an innate pain to their beauty. "All of it is a kind of interesting torture that results in this image of perfection," Swicord says. "Perfect dancing, perfect music, perfect face, perfect figure, perfect walk."

The ribcage is cinched tight with a sash, called an obi, to achieve a rail-thin look in the kimono. "It's like a bondage situation, in which your midriff is wrapped very tightly with these cords that cut into you," Swicord says. "Then the obi is very heavy and you can only sit in a certain way." But it can also help the women maintain good posture. Dalby says geisha eventually find it comfortable, "because they wear it every day. If it is loose and slips at all, it will give her a backache." (the rest is fascinating.) 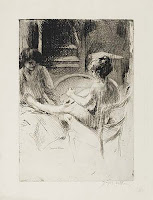 The hostess achieved this stately movement as much by the restrictive nature of her clothes as by years of deportment and dancing lessons. Skirts were confining, being tight waisted and 'bell' shaped, with every aspect of the skirt presenting a concave curve. They followed the same sinuous lines of art nouveau.

The grace-fullness of the elliptical curve which passed from hips to hem depended on the skirt length and the height of the wearer. This fashion favoured the taller woman. It also favoured the wealthier woman. Many skirts had trains which swept the ground, indicating that their owners belonged to the carriage class and could afford to employ servants to valet them.

Many an Edwardian society hostess in middle age was in urgent need of the help of cosmetics and by 1900 face enamelling was once again beginning to be accepted among society ladies. (again, the rest is fascinating.)

(what the heck is face enamelling???)

A mood of temptation!

hmmmm--i must say i'm not sure i understand

I think at that time in the East, women's fingers and toes are still quite privacy,a woman trim her nails gleaned as very privacy and maybe temptation imagine.

that's fascinating. thank you so much for taking the time to explain.