japonisme: how we see water

how we see water 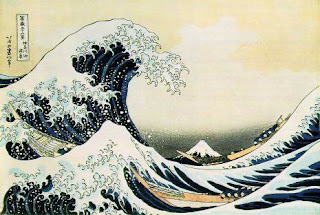 "This is a seascape with Mt. Fuji. The waves form a frame through which we see Mt. Fuji. 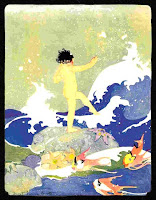 Hokusai loved to depict water in motion: the foam of the wave is breaking into claws which grasp for the fishermen. The large wave forms a massive yin to the yang of empty space under it.

The impending crash of water brings tension into the paint- ing. In the foreground, a small peaked wave forms a miniature Mt. Fuji, 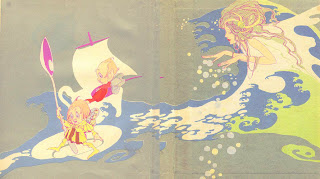 which is reflected hundreds of miles away in the enormous Mt. Fuji, which shrinks through pers- pective; the wavelet is larger than the mountain.

Instead of shoguns and nobility, we see tiny fishermen huddled into their sleek crafts; they slide down a seamount and dive straight into the wave to make it to the other side. The yin violence of Nature is dismissed by the yang relaxed confi- dence of expert fishermen. Oddly, though it's a sea storm, the sun is shining." 1