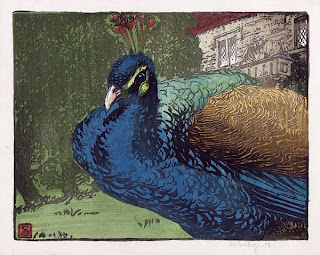 Allen William Seaby, (1867-1953), Professor of Art at Reading University, was an influential exponent of Japanese style woocuts. Although primarily a printmaker, Seaby also painted in oil and watercolour and illustrated a number of bird books, including Kirman's The British Bird Book (1910-13) and The British Sporting Bird (1936).

Seaby's body of work is a fine example of the influence of Japanese printmaking in England during the 1920s and 1930s. 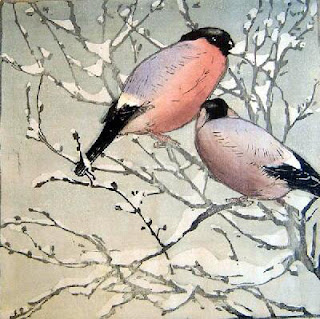 The British colour woodcuts ... are a Western adaptation of the 19th-century Japanese Ukiyo-e prints. They constitute a strand of the 'aesthetic dialogue' between Japan and the West that is in many ways similar to the collaboration between the Japanese potters and pioneer studio potters in Britain. Both potters and printmakers investigated and adapted the methods and philosophies of Japanese art and crafts in their own work, and both sought to learn from and exchange ideas with Japanese artists. 1

Allen Seaby was an influential exponent of the Japanese woodcut method; his bird and topographical prints often treated Western fauna and flora in a manner characteristic of so many Ukiyo-e prints of the early 19th century. 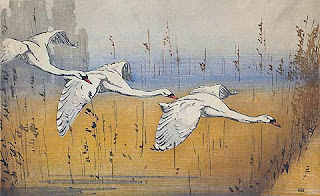 Some ten years ago I produced a score of bad etchings which made me, and many others I have no doubt, very unhappy. My thoughts were in color; consequently I had little sympathy with the convention of line as a means of expression; I came to abominate the cold unresponsive nature of metal, the smell of acid and oil, and the dirtiness of printing inks. I meditated sadly upon the fact that if Meryon had not become afflicted with color-blindness, he never could have forsaken canvas for copper, and that Michael Angelo must have love color, though he never had much time to pay with it, for Vasari said that he was so pleased with Martin Schongauer's print "St. Anthony tormented by the Devils" that he set himself to color it. 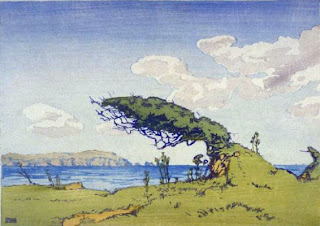 Then I recalled an article in "The Studio" by Allen W. Seaby on printing from wood-blocks, re-read it, and the mutation from desire to accomplishment resulted. A magazine article on such a subject may be inspiring, as this was emphatically, but its brevity precludes its use as a manual. I had, therefore, all the fun of experimenting blindly more or less, which perhaps fired my enthusiasm. Morley Fletcher's book unfortunately did not come my way until recently, or I would have been saved many pitfalls. However, he inspired Allen Seaby, who activated me, so that he merits my acknowledgements. I tender very grateful acknowledgments also to my fellow color-printers William Giles, Allen W. Seaby, Y. Urushibara, and Frances H. Gearhart, for sympathy and generous contributions in an interchange of ideas, and to the three first and to John Platt, A.J. Musgrove, and Martie Hardie of the Victoria & Albert Museum for permission to reproduce their work or prints in their possession.

posted by lotusgreen at 4:07 PM

Your blog is amazing, very interesting and a lot of good colorplates.
As an Dutch art researcher I am annotating the letters of the Dutch artist Jan Mankes (see www.mankes.nl for all his works. In one of his leetrs he writes about an article in The Studio from Allan W. Seaby. In your blog of 20 may 2009 I read a story of the artist Walter J. Philips who also was influenced by this article. Could you tell me, in what year and which nr. Seaby wrote his article, I need to read this article in order to understand what the artist Mankes meant in his letter of aug. 1913.

thanks for your kind words. looks like it could be this piece, but that issue is from 1919!

from 1926 is the mention of seaby by phillips. it's in the preface, near the bottom of the page.

Just discovered your site. Thank you for what
you are doing. As an old illustrator who loves
etching and wood block prints your images and
words are a treasure for me.
Thanks again...Jim

how very kind of you jim -- thanks. always nice to meet a kindred spirit.