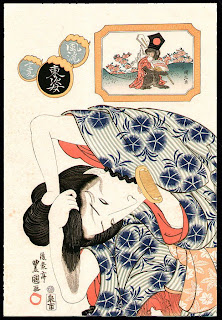 That girl at twenty --
her black hair ripples
through the comb
in the pride of spring --
such beauty!

A thousand lines
Of black black hair
All tangles, tangles --
And tangles too
My thoughts of love! 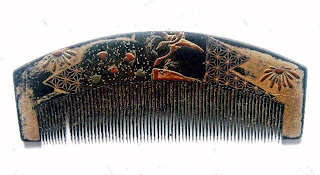 
I will not comb my morning hair:
Your loving arm, my pillow,
Has lain under it. 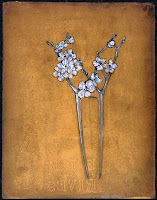 in a spring night

It's hard to shake off

I comb my long hair 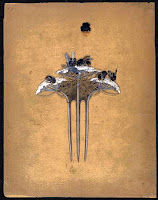 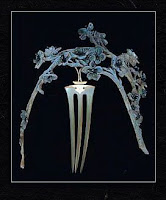 today's post was inspired by a very inspiring blog i happened across yesterday, leafed through from "cover to cover," and then went off doing research all day (when i wasn't photographing dragonflies). it's comprehensive, it's fascinating, and it's here.

A WOMAN'S HAIR IS HER LIFE:
JAPANESE COMBS AND HAIR ORNAMENTS

A Jap- an- ese comb is about much more than just styling hair. Four hundred years ago, Japan took the simple comb and transformed it into an elegant beauty accessory that became a work of art. Japanese kushi (combs) and kanzashi (hairpins) became expressions of a woman's character, social class, religion, and even what neighbourhood she lived in. They also revealed whether she was married or not, her age, and whether she had any children. According to an ancient Japanese proverb, �'A woman�'s hair is her life,' (Kami wa onna no inochi) and from the early 1600�s until the beginning of the modern era, decorative combs and hairpins have been an important part of Japanese fashion. 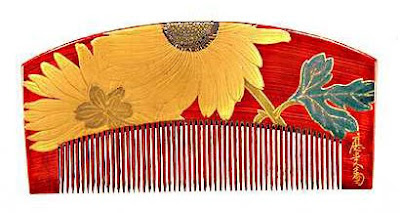 Western style jewelry such as rings, necklaces and bracelets was not worn in Japan until the modern era. Instead, women decorated their hair. Hair ornaments became important family heirlooms that were handed down from generation to generation, and in Kyoto, when a comb eventually wore out or was broken, it was saved until the Kompira Kushi Matsuri (Kyoto Comb Festival) and taken to a temple where prayers were said for its spirit, after which it was burned in a purifying ritual fire. 1

posted by lotusgreen at 9:21 PM

Such a beautiful comb would aspire one to share its beauty.

i wonder which is your favorite

These are all beautiful,i like the second one of edocombs and the manuscripts of lalique hairpins !

I like the one above the words .. a dreary feeling.
My ultimate favorite would be one with chrysanthemums on it.

Did you see the Blogger April Fool's trick on the Dash, Lotus?

marvellous! when the japanese say a woman's hair is her life they don't mean this just metaphorically, well nowadays maybe, but there is the old belief that her vital force is hidden in the hair and if a woman looses it she will die. and this explains why the long tangled hair is a leitmotiv in the japanese horror movies (inspired by a kabuki theme also, the maiden becoming possessed by a demon), when the woman returns as a ghost to punish those who hurt her, the unfaithful lover for example, it is always her hair like a frightening spider web wich is used as a symbol... there is always this ambivalence about the japanese portrayal of women, the combination of grace and horror inspiring "otherness" for the men. like for example when the kanzashi becomes a weapon, another very popular theme...

your wish is my command

roxy--that is fascinating. i love the knowledge you bring here. thank you.