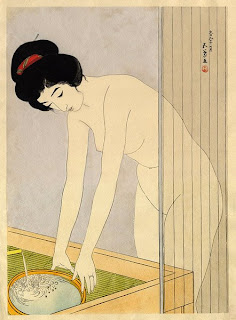 in twilight is an accident 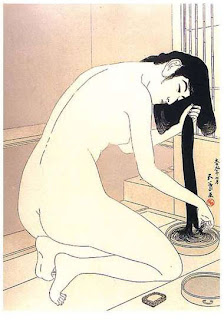 whose niceness betters easily the intent

before this music,and poetry cannot


go near because perfectly fearful. 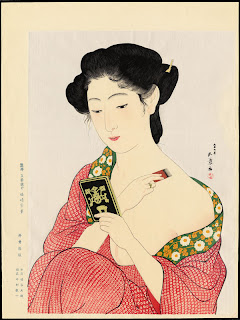 meanwhile these speak her wonderful

But i(having in my arms caught 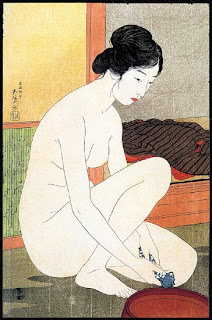 to my mouth,taste the accurate demure 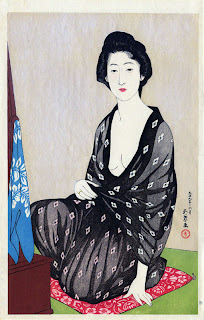 of an imaginable gesture


at the turn of the last century, as we've said, influences went in both directions. as the japanese artists began to emulate western art (some say 'worship it'), learning to represent shadows, reflections, perspective, etc., other more subtle changes were happening as well. 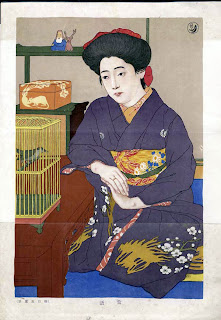 subtle lines and shadows around the eyes made the communication of emotion much more accessible. the presentation of a single woman in a seemingly solitary place also allowed them lit in a more human light. and they were, occasionally, nude.

son of a great samurai, hashiguchi goyo (often simply referred to as goyo) was an artist from a very young age. with support from his family, he began his studies in art -- both western and traditional japanese. 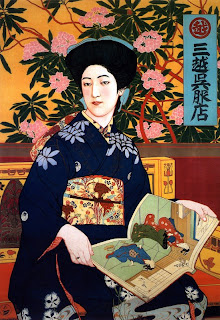 born in 1880, goyo quickly found work as an illustrator; he designed the cover and some illustrations for the first edition of natsume soseki's 'i am a cat.' interestingly, what really jump-started his career as a commercial and fine artist was his winning of a poster contest for a local department store. (as we've seen before!)

this led to his making a connection with the publisher watanabe, which led to his wider exposure as a fine-arts printmaker. his talent and thus his reputation skyrocketed, or would have if he had lived. 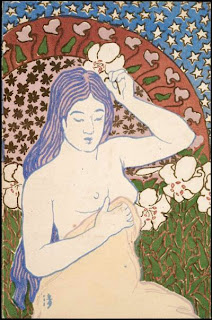 after the publication of only 14 woodblock prints during his lifetime (and about that many additional after his death), goyo died in 1921 of meningitis. but his embrace of new forms (even art nouveau!) lives with and inspires us still.

posted by lotusgreen at 2:06 PM

Hi Lotus,
I tried to leave a comment last night but either my internet connect or Blogger was glitchy and so it vaporized.

I wanted to say that this pale and gorgeous post so well reflects the grace and elegance of your mind. I am going to post some white flowers for you. -That is I will try again.

thank you princess--i love to get flowers!

oh they are so wonderful I cannot stop looking - and vulnerable too - like floating in grace...

thank you roxana--it interests me that the nudity too now seems more "western" in its depiction too. i'm glad you like it.

What a wonderful discovery is your blog, Lotusgreen! I've bookmarked it to return and enjoy every post. Stunning!

robyn--thank you! i'm glad you made it over

enjoy the ride--i'd love to know your thoughts as you go....

thank you for sharing this lovely artists work I am a writer from Alexandria Egypt writing a novel using this poem and the paintings has helped ma a lot thanks again and wish you all the magic the world can bring.salam.