japonisme: the alternate shaping of reality

the alternate shaping of reality

while some 60s poster artists looked to french art nouveau, others looked to vienna. particularly when it came to lettering, alfred roller's font was nearly ubiquitous.

"The lettering by Alfred Roller in this poster he designed for a Secessionist exhibition in 1903 was the major source of inspiration for Wes Wilson and the other San Francisco poster artists of the 1960s period." 1

other designers of that moment included kolomon moser, but even on his own posters, he used variations of roller's fonts. 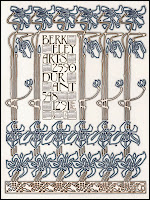 david goines borrowed from wiener werkstatte fonts (along with many others) in his posters as well.

when i was living in the haight-ashbury district of san francisco in the late 60s, my favorite poster artist was mari tepper. her work was so different from the rest, but now i see echos of vienna here as well.

why, you might ask, should there be such a strong influence from secession vienna on bay area artists? patience, grasshopper. all will be shown in the end.

beyond the letter- ing, we saw the alternate shaping of reality which may easily explain the way the fonts look different in the hands of wilson versus their originator. what do you think?

posted by lotusgreen at 7:12 PM

The Vienna Secession is probably my favorite time in Art history (Klimt, Schiele, Kokoschka, Czeschka)...I see the connections/influences oriental art had on that period, as well how artists were all influencing each other.

Just because it's a personal obsession...I'd love to see you tackle birds of prey. The Hiroshige, Hokusai images I'm very aware of...but some of the lesser known artists...well...you seem to fins stuff that I've NEVER seen before (which keeps me coming back)so...just an idea...keep up the fascinating work. evan

thanks so much, even--nice to see you. hmmm--interesting suggestion. let me mull that around for a while....