japonisme: the moon in the stone

the moon in the stone 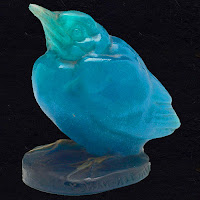 who, after all, is the artist? or has the concept of the individual artist always been a myth? even the most solitary of the arts, writing, is probably only solitary in a small percentage of the time; as an editor, i have seen unedited manuscripts. editors, like trans- lators, are the silent hand in the process of creating art in literature. 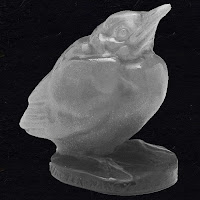 what about painting? there, i will admit, it's hard to imagine paintings to be group endeavors. but let's look at it from another perspective: beyond even the time when students collaborated on the master's pieces, the history of art is crammed with stories of agents and galleries telling the painters what the public wants, what they can sell. 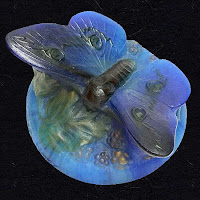 who is the artist in these little birds, the carver of the form, or the maker of the color? for me, the color in the work of almeric walter is the revelation. turns out, though, that the two ele- ments were contributed by two different people. henri berge carved the creature, walter himself developed, or rather refined, a method of calling the most from his production of pate-de-verre.

which is just like what it sounds like, mashed then made malleable glass, poured into moulds (of the little statues) which have been painted on the inside, and then with various powders and chemicals to insist on the color to go where the artist wants. who is the artist?

pate-de-verre, marqueterie-de-verre, pate-de-cristal.... numerous glass artists were avid to employ these revived methods which had been originally popular in ancient greece and rome. to my mind, of the first, walter and berge were the undisputed mas- ters, but there were other artists who offered some wonderful pieces. 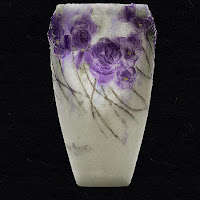 one of these was gabriel argy-rousseau, who, as far as i can determine, designed his own pieces (and is a very early user of a hyphenated last name, borrowing the 'argy' from his wife's name). i really like this piece, and some of his other work is mesmerizing, but in the end the limited pallet of both color and style, loses my interest.

francois-emile decorchment produced some spectacular pieces, his experimentation drew some fabulous results, but his output of this style was limited to far fewer than the 100 or so pieces walter and berge produced.

when i was in paris, the one item in the museum of decorative arts that most aston- ished me was a simple string of glass flowers, a necklace by lalique in which every little flower seemed to contain the light of the moon. i can't tell you how that moonlight is inserted into these pieces, nor why i am so profoundly touched by it, but it is, and i am, and for this i am grateful. 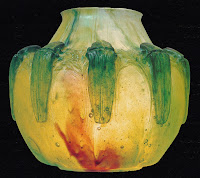 the maestro, without a doubt, despite the grand trickery of decorchement, the cool brilliant elegance of lalique, the constant charm of argy-rousseau, or the radiance of walter and berge, was, of course, emile galle. 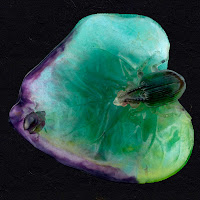 the saddest case is that of daum, the entire clan, who were the ones to bring glassmaking to nancy. galle came to nancy a bit later, establishing his own firm, a companion and competitor to the daums. sad because while they were the first, while walter and berge started off working for him. though walter sold him the rights (non-exclusively) to his methods, to my eye, the daums were never able to quite pull it off.

daum was salieri to galle's mozart; while some of his (their) work is beautiful, as a whole it is just not a revelation of genius. but i can't presume sadness from this distance. nor envy. nor pride. what is important is that the daums created an atmosphere in which great miracles could happen, and they continue still.

i must add my gratitude for a wonderful blog
for seeing this amazing, mostly regional, work: HERE

posted by lotusgreen at 2:54 PM

oh gerrie, thank you so much. i'm so glad you commented.

What beautiful work and what an informative article - I have seen these objects d'art but never thought about who made them or how.

i know! and i've sat here for literally decades with these books and only now begin to learn from them. i guess on some level i'm a little afraid of finding out who were assholes that would get in my way of enjoying their work; but on the other hand i'm often tempted to delve as deeply as possible into just one person. i think though that i don't really have the attention span for that!

lily you owe it to yourself and the glory. f... the attention span. there is a hord of people (an army of mute readers) looking over your shoulder every posting. and never leaving a comment or note saying thank you. but realy, who cares? go on, please go on ...enlighten us, educate us. make every day even more beautiful.