japonisme: the style that dare not speak its name

the style that dare not speak its name 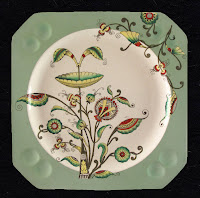 one studies in order to learn new things but, as any researcher will tell you, you are more likely to come away far more aware of how much you don't know. what i thought i knew: 1. what items from the aesthetic movement looked like; 2. when the aesthetic movement was; and 3. who were its biggest names. i was right about the names. 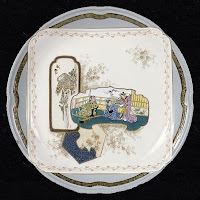 as for the rest, i currently have over a foot of books, piled on top of each other, on my desk, about twenty-five windows open in my browser (don't you love it?), and if i'm getting a clue, it's only the sweet whisper of one. 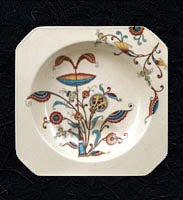 what i thought aesthetic movement china looked like (in their japonisme) was almost like collages, little overlapping stamps on an international letter, with extraneous flowery or fan-shaped decorations, and probably a couple of birds. you could find it all, in fewer colors, in the lacquers from japan which were their inspiration. 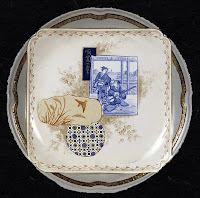 okay, but there's the rub, and it gets complicated. yes, i could, i have, show you perfect examples. so let's see if i can say this in a comprehensible manner. well, first let's say that the images on the right are by christopher dresser, and on the left are examples from one of the series in the lambert-rousseau dinner- wear (see more here). 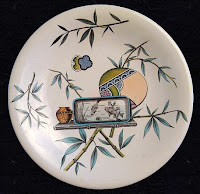 the images of japanese goods with which i could illustrate the correspondences may very well have been made after the works they were supposed to have inspired. seems i have not paid close enough attention to dates. even more convoluted are the facts that many of these very designers began visiting japan, not only to study, but to set up with artisans in japan to produce for export good which looked like they might have inspired the japonisme wares being sold in the west! bing insisted on it. 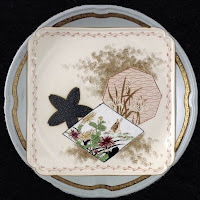 now, christopher dresser is definitely one of those names. and yes, his designs, particularly as seen in the plate to the right, match the image i had in my head for 'aesthetic.' so, though, do the images on the left, but those designers do not appear on my lists. but here's another problem. the chronology i've always understood of all this was that the aesthetic movement followed very quickly on the tails of the arrival of japanese goods in the west, the 1850s to the 1860s, yet all of these are from the late 1880s! why do you people keep coming here when i clearly know nothing! 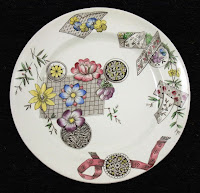 granted, dresser was quick out the gate, getting very involved with learning about, and writing about, during the 1860s, but that ends up seeming less germinal to this discussion than to understand what the aesthetic movement really is; hint: those little fans are only an emblem, an honorarium, a fad. 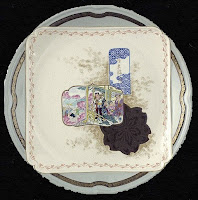 whomever you credit with beginning the era, ruskin, morris, or a number of others competing for primogenitor status, what it boils down to, in my opinion, is yet a number of new faces with the real name of japonisme. (but don't tell the pre-raphaelites.) 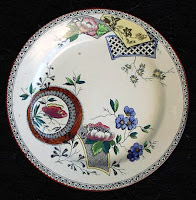 i will grant you, it had a different name in every country where it occurred, accompanied by what were very distinguishable national differences. but whether it's the desire for handmade, simple goods, or a cult of nature, or a new understanding of space, line and color, it all began with one catalyst: japan.

posted by lotusgreen at 4:41 PM

So....where does Eric Ravilious come into play? I realize that he was later, but I always thought of him as the quintisential Anglo/Aesthetic Movement pottery decorator. His work seems so steeped in the Japonisme tradition, but given the time frame in which he worked was he simply being a revisionist (albeit a glorious one). A fascinating investigation. Thanks again, Debra

thank you debra-- eric ravilious? i do not know that name! it sounds like the name of a snidely whiplash-type character!

you make him sound fascinating though, so i'm off to learn.

it's wierd. like for all of the stuff i usually talk about here, it usually sticks in my head, but this stuff does not. maybe it's because i have a grudge against ruskin.

Well yeah we all have a grudge against Ruskin buried in our hearts - Go Whistler! is my mantra. Regardless of how snarky his name sounds Ravilious was I believe (hope) one of the good guys - a part of the Bloomsbury group. I love his work - it's very reminicent of Dagobert Pesche (and snap, where is the spell check!). Look forward to your comments re: his work. Debra

girl! you're on my team!

and i love so much of what came out of the bloomsbury group. remember when laura ashley reproduced what's-is-name's fabric from the ocean liner? i still have that on a pillow i made.

anyway, interestinger and interestinger. i also thought that top green plate design of dresser's looked like dagobert -- what do you think?

i love being sent on errands!

Ravilious was quite an excellent painter, mostly landscapes and (I think) watercolors. But he died in WW II (1942)so that's quite a long time after the original inspirations for Japonisme. I think that Manet and his followers were responsible for the interest in the Japanese aesthetic in France. I am trying to remember who Manet painted with a copy of a Japanese print on the wall in back of the image. Anyway, that's beside the point of your post but you know, I can digress with the best.

turns out i had saved one of his in my collection -- the one with the ducks. i'm such a sucker for ducks. but nancy is right-- he's just outside my thrill zone, which, i know, is terribly narrow.