japonisme: the music of wallpaper

the music of wallpaper 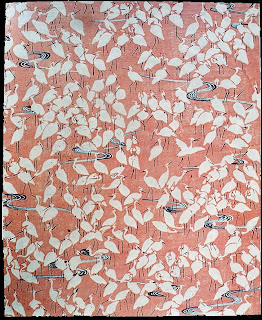 while actually reading the text in my copy of 'hidden impressions,' the catalogue for the exhibition of the same name at the MAK in vienna, of instances where the japanese influenced the austrian arts. we'll get back to that catalogue in a future post, but for now, let's follow this little adventure.

i was wildly taken with the two images of japanese endpapers, the cranes on the salmon background and the puppies. sure i had seen a western equivilent, i searched for days to no avail. all of the western endpapers, even those from childrens' books, were, to my eyes anyway, far more rigid by design.

refusing to give up, i started perusing some others of my books. i double-checked the catalogue and all of my other books about design in vienna at that time: nothing. why, i asked myself, and still do, have japanese endpapers in the catalogue with no japonisme version for comparison?

i started on my other books about paper, wallpaper, and had myself an aha moment. i recalled having noticed so many times how actually un-equivalent these matches-up usually are. rarely does a japanese design form get re-interpreted in some into something comparable back and forth. usually, it, like some inherited traits, skips a generation.

but once i found these, not only didn't they surprise me, but they gave me deeper understanding in both sides of the equation. first, we've discussed the lesson that the west learned that caused them to question the validity of any differences between art, decoration, and craft.

no one embraced this concept more strongly than the nabis, for whom there was no less a creative act in creating wallpaper than in painting a painting. much of what we know as paintings are actually bits of a wall-hanging or a screen (see here), but even when the item was a painting itself, it was covered with wallpaper, and, or, the sort of design that hangs in an invisible balance between subject and surround.

in fact, the more one looks at the work of the nabis (here represented by maurice denis, pierre bonnard, and vuillard), the more one sees rhythm, pulse. these pieces do not make a statement, they make a song. 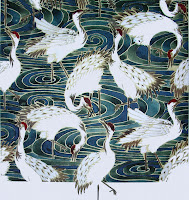 and the songs have continued out in ever widening circles. whistler sued over it; the right to see a surface as something other than flat, the right to name a painting a symphony, a rhapsody, a song.

posted by lotusgreen at 6:10 PM

beautiful. I really like gorgeous patterns, but I have a love/hate relationship with them. I love the look of patterned things, but when I see something I really like, I'm confronted with my own laziness. Or is lack of patience? grrr- probably both. I don't think I'm a narcissist- but one on the things that I like about this blog is that it forces me to evaluate what I do art-wise. Not like it's a competitiom, but, in a way, it is.

well, as long as you remember that your competitors lived 100 years ago or so, when the energy may have been just so slightly different.

There's alot going off in the text here, Lily. Almost as much as in the patterns!

I was interested in the pinks. I tried to comment earlier but my log-in was playing up. Anyway, I am playing the pinks back on a post you set me off on.

oh my charles-- i didn't even consciously see the pinks! can't wait to see yours.

and for all the text includes, it does not include, as it was meant to, a quote from Jan Verkade, friend of the nabis if not nabi himself, "the nabis were concerned primarily with decorative painting: 'a war cry circulated from studio to studio: no more easel paintings!'"

nor a link to a glorious field of endpapers.

Great exampoles,I tried finding a repetition in the flock of cranes (first and favorite picture)but failed. thanks.