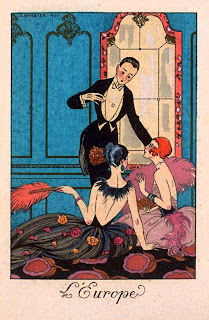 george barbier evidently favored the series form. where yesterday we saw seasons, today we have the continents. these and others we'll see in the future were from annual almanacs that he illustrated. 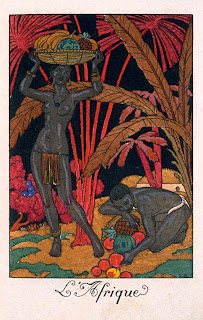 in the early 1910s, following on the heels of charles worth's 'invention' of haute couture, the fashion magazine was born. barbier, then about 30, had found his shangri la.

The concept of the fashion magazine as a tool for defining style was in its infancy. Through these publications, Barbier reached thousands of women. With free rein to draw his own designs, as well as illustrate the gowns of established couturiers, Barbier began to influence the look of the day. As women sought new freedom in the form of shorter and nonconstricting dresses, Barbier's designs kept step with them -- or stayed a step ahead. 1 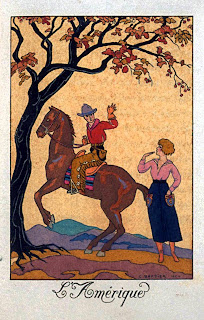 the wave of freedom-seeking, self-defining, celebratory and love-hungry women that spread throughout europe after world war one found its collective vision fulfilled in barbier's designs.

so who was this visionary? all his bio decry the lack of much about that, for which this new york times serves as an illustration:

Contributing to his disappearance [from the public eye after his death] were his own reticence and a surprising sparseness of biographical information. Born into a prosperous bourgeois family in the provincial town of Nantes, he lived a clearly very different lifestyle in Paris, where he frequented unmistakably, if not exclusively, homosexual circles - he was, for example, an intimate of the dandy and poet Robert de Montesquiou, who introduced him to Marcel Proust.... 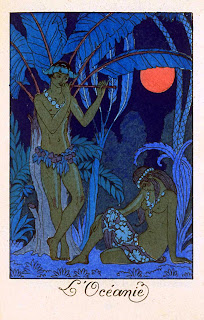 .... His library, containing many rare editions, was auctioned off and his collection of Japanese and European erotica was donated to the Bibliothèque Nationale, where it was placed in the restricted "Enfer" section, reserved for works considered threatening to public decency....

From the outset an ardent admirer of Diaghilev's Ballets Russes, he produced sumptuously colorful albums celebrating Nijinsky and Tamara Karsavina, and designed costumes for the ballerina Anna Pavlova. But he parted company with the Ballets Russes aesthetically and musically with the Cubist-style production "Parade" in 1917, which he condemned in print as "strange, noisy, eccentric" and "the apotheosis of the sneer." 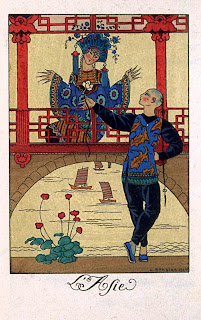 A fashionable sapphic subtext is often present in Barbier's exquisitely composed fashion plates of highly feminine couples and trios, sometimes with companions in immaculate white-tie evening dress, who are either ambiguously epicene or clearly women in drag. "Real" males seldom appear in the artist's oeuvre....

His color plates for publications like the luxurious monthly "La Gazette de Bon Ton," published from 1912 to 1925, were produced using "pochoirs" or stencils, a technique criticized by some purists but vigorously defended by Barbier as a way to present "the artist's work in all its freshness without that often slightly cold transfer produced by mechanical means."

The hand printing process involved, inspired by the methods of the classical Japanese masters, produced a still-undimmed, jewel-like quality in the resulting images that testifies to Barbier's judgement in championing the pochoir technique. 2

posted by lotusgreen at 4:46 PM

I like Barbier's work a lot, especially the more exotic stuff. There's a pretty decent book of his work out, but as sometimes happens with art books, the hefty price vs the content...eh. These are pretty cool images- hadn't run across them before.

thanks, evan. actualy, i took severalk of those expensive books out of the library and there seemed to me to be too little information and too small of pictures.

i had been looking for *just* this stuff when i came across this post on the wildly resourceful john coulthart's blog.

the reference to the bunka library was a godsend.