japonisme: it was all going on all at once

it was all going on all at once

"We [poster artists] were young and swimming in the same socio-political milieu that produced the rock bands, the drug culture & the sexual revolution. All this was going on in a very small part of the world, and it was all going on all at once."

so continues david goines: "The most important poster event of the ‘60s, was a 1965 show of Jugendstil posters at the University of California Art Museum, organized and curated by Herschel Chipp.

"This exhibition was seen by all of the people in San Francisco who were doing posters for the rock ‘n’ roll events of the time, and the very next posters were all but direct imitations of those of the Jugendstil, particularly reflecting the lettering of Ferdinand Andrei (President of the Vienna Secession 1905), and Leopold Forstner of the Wiener Werkstätte, which you will recall as letters all made to fit into a square, or some other shape, and almost illegible."

every one of the earlier posters shown here (and most of them here) were at that exhibition. 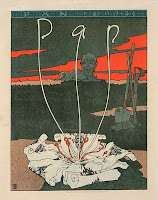 more from david goines: "Some of the poster producers were: Berkeley Buonaparte, The Print Mint, The Family Dog, The Food, and Bill Graham. Important designers of that time were: Stanley Mouse and Kelly, of Mouse Studios, Wes Wilson, Victor Moscoso, David Singer, Rick Griffin and Bob Fried.

"More than anything else, the psychedelic poster era, brief as it was, created an audience for posters that had not existed since the turn of the century. The psychedelic and rock poster was not an art reproduction of a poster about a far away event, as was the then-ubiquitous Spanish bullfight poster. They were real advertisements for real events of immediate interest. The posters had a commemorative value as well as being something neat to put on the wall.

"The general acceptance and enthusiasm that greeted the poster designers of the late 60s and early 70s can be attributed to the Fillmore and Avalon posters that preceded them."

when seen in context with what had been going on around the world, the mucha exhibition in london in 1963 and the beardsley in 1966, the influence became vast and intoxicating.

perhaps direct correspondences are harder to find here than in a previous post, but the worm in the bottle is obvious; with squiggley lines, and blowing hair, and the mad swirls of toorop and the decorative elements, the liberties taken with reality, and the general breaking up of our very air, the artists of the secession were in much the same milieu as the stoners 50 years later. 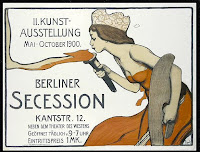 once vision is al- tered, can it ever return?

reference: jugendstil & expressionism in german posters, 1965, herschel b chipp and brenda richardson; regents of the university of california.

posted by lotusgreen at 7:04 PM

cool stuff, as always...I love the psychedelic era posters (do you know David Singer's work for the Filmore?) & I love the graphics from the Werkstatte...I love coming here & discovering all these treasures.

thanks, evan! didn't i have one by david singer in this series? i'll admit, i still prefer the older ones, but i'm really enjoying learning all of this background.

and let me thank you, too, for commenting. if i don't know someone comes here, i never get a chance to visit their (often awesome) blogs!

I loved those 60s posters. Wish I could find one or two to grace my humble abode.

Thanks for this post. A really interesting insight into how and where the psychedelic poster fits into the culture of the twentieth century.

lynn--they're on ebay for as little as ten bucks!

yeah, john-- you're welcome. i'm finding this all very interesting.

still doing research on it all just not posting, but will continue with what i learn.

Well researched article, thanks for sharing! Check out more of Wes Wilson's art on his website, http://wes-wilson.com

thanks very much, aleah. this post is part of a series, and i had already posted a link to his site in an earlier post, here.