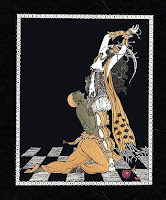 the story in diaghilev's ballet scheher- azade is found nowhere (and, perhaps, everywhere, in bits and pieces) in the collection of stories called the arabian nights. there are stories which include the characters named in the ballet, including, of course, scheherazade, who is the 'featured player' of the book, but beyond this, it's sketchy, but who cares? one view of that backbend is all the reason one needs.

as you can see, the production of the ballet has remained remarkably similar, including the costumes by bakst and the choreography by fokine. then, as now, the designs have had a great power in influencing fashion and style.

george barbier was so moved by the ballet that he created a series of drawings illuminating the performance, and paul poiret openly attributed his inspiration to bakst.

even now, i can easily see bakst as further motivation to galliano in his fall 2009 rtw collection. and not only galliano, but the whole world celebrates the ballets russes this year because, as of this month, it reaches its hundredth year.

much has been written, and much of that fascinating, about the simultaneous appearances of scheherazade, salome, salammbo, and other very sexual, very dangerous, women during the terrifyingly liberating time of the fin-de-ciecle. it will not be added to here.

instead we will simply exalt and congratulate the multitude of wondrous artists who came together at that time: diaghilev, nijinsky, cocteau and matisse, bakst, and balanchine, and rimsky-korsakoff, and stravinsky. there were chanel and braque and leger and derain and miro and rouault and picasso and utrillo and gontcharova and pavlova, and redon.

or better yet, go celebrate them yourselves:
in boston, london, stockholm, amsterdam, salt lake city, hamburg, paris, and many many more. 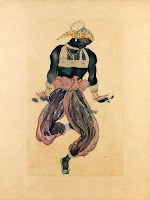 or read more in the new york times, from harvard, or everywhere in the world! the universe! or even further out! start here! or here.

if we want to analyse, i'm sure there'll be time. for now, dance.

posted by lotusgreen at 5:20 PM

What a wonderful post! I loved this! By the way, I gave my first daughter the very dangerous name of Salome.

oh that is so interesting, yoli! what inspired you?

Ah, Scheherazade... I know we are supposed to outgrow it. I know that the lush orchestration with the thunderous effects and that unbearably sweet violin are supposed to appeal to overly emotional teenagers, and that as our taste matures we are supposed to grow into chamber music by Bach and Mozart. Yet, all it takes is a visit like this post to remind you that you're not all that grown up after all, and that you're going to have to keep looking for a stronger vaccine against foolish romanticism. Love the music and the dance in that video, and I especially love that Bakst Scheherazade costume.

But the thing that prompts me to write is your reference to that remarkable backbend, and what it signifies. There are those who would say that it is a gesture of submission (as Scheherazade bent to the will of the king and made herself totally vulnerable to him before drawing him in and conquering him with her stories). Others would say that women have dealt with quite enough submission, thank you very much, and that their vertebrae should not be doing such things anymore. Since you singled it out, I am curious about what it means to you.