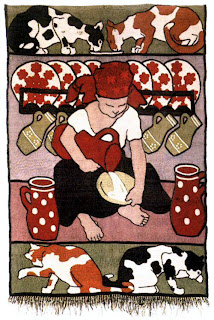 Ask which avant-garde artist Parisians of the 1890s knew best and you might be surprised by the answer. It was not Toulouse-Lautrec or Bonnard. It was Steinlen. It was he whose work drew most critical acclaim. It was also he who influenced Picasso and Braque, Penfield, Sloan, and Hopper. A posterist and printmaker, sculptor, illustrator and humorist, Steinlen's artistic and social impact was powerful. 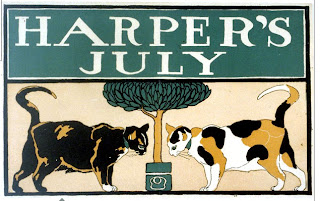 Born and educated in Lausanne, Switzerland, Steinlen was familiarized with art at an early age, as one grandfather had been a lithographer and the other a watercolorist. After two years at University, Steinlen's father recognized his son's interest in art and sent him to a textile manufacturer west of Paris where his talent could be combined with practical job skills. 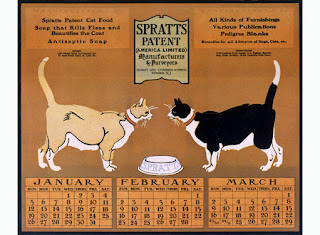 At the age of 22, Steinlen moved to a section of Paris known as Mont- martre in order to pursue a career in textiles. He was, how- ever, drawn to the lifestyle of artists, poets and musicians. One of his favorite haunts was the Chat Noir (Black Cat) Club where he befriended the renowned playboy Aristide Bruant, a patron of Lautrec. Soon Steinlen was illustrating for Chat Noir magazine and Bruant's magazine Le Mirliton. 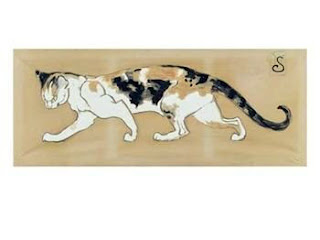 Steinlen's drawings were casual scenes of city life until the 1890s when political unrest and economic depression began to influence his style. Steinlen's work was subversive and deep in political satire. He was greatly influenced not only by his peers at the time, who included Lautrec, Willette, and others, but also by contemporary literature. He was a very personal artist using his wife, daughter and family pets in many of his works. 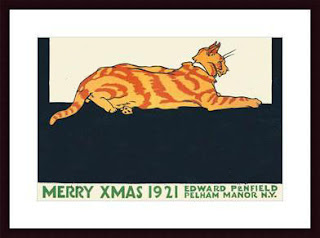 Steinlen's works -- his drawings, paintings, and posters -- have such a strong sense of reality that they almost have a sense of movement. The animals may leap at any moment, heavy packages may drop, tears held back may flow. It may be this quality that has made him one of the most loved, most exhibited and most collected posterists of the Belle Epoque. 1 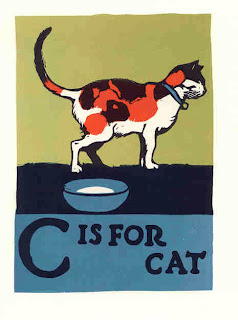 Penfield's success was due, in large measure, to his skill in applying the style of Toulouse-Lautrec and Steinlen to upper-class American subjects.

posted by lotusgreen at 5:33 PM

merci! that goes perfectly with this series!

I missed "Le chat noir" poster. But the selection is great.

i love everything chat noir! but somehow i came across all of these different images of the two cats facing each other... sort of a stream of thought post more than a documentary one

Are you bored yet with hearing me tell you how much I enjoy your beautiful, elegant, informative, pleasurable blog?

I love this blog. It is beautiful, stylish and educational.

htgt: don't be silly. i not only treasure it, but it allows me to go on. this is being tremendously rewarding to do, and yet when i don't get the feeling its being shared with others i feel bad.

liza--thanks so much for your visit and comment. it's by c.b. (charles buckles!) falls. see the whole alphabet here.

the name and date of artist is often to be found in the title of the image, so if you click on the image and then read the top of the window odds are it will be there. i think i'll mention that in a more public place....

Thanks. I did click on the image but there was no info on that one. Anyway, I actually have that whole book - I just didn't have it with me as I was looking at the image. It looked familiar, but you were discussing Penfield, and I couldn't quite remember.

I am astonished and pleased to see how much the individual pages sell for. Astonished because I paid so little for the book, pleased because I plan to sell it at the art gallery I own.

I also own a fair number of Penfields, but I will never sell them. I love them too much.

And let me say again how much I enjoy your blog. The care and thought you put into it is evident, and I look forward to each new post. I can imagine it would be hard for you not to know how much your readers are getting from it.

sounds like you really understand! and i thank you for that.

i looked at your gallery--wow! thanks for turning me on to Mary Louise Spoor. it puts your comments about the penfields, and owning the book, into context. what a resource.

two things: i'll often feature other artists than who i'm discussing in a post. that one has at least four! and the attribution actually is there on that one too. i went and checked. it does get cut off in the address bar, but is still on the very top line of the whole window. like how this one says "Blogger: Japonisme -- Post a Comment."

so glad you showed up

Very beautiful pictures, as usual!
I didn't know Steinlen had so much influence on other artists, a lack in my knowledge of art history.

thanks, sabine--glad you like them. i didn't realize this either! i'm learning too.

I love the fabulously fat cats featured on the calendar!