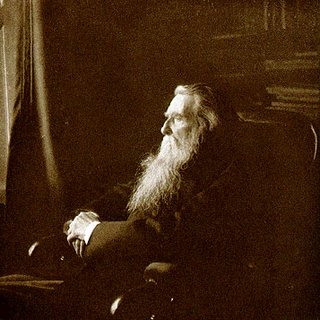 perhaps because his father wanted him to be a poet and his mother wanted him to be a bishop in the evangelical church, john ruskin compromised and became a fire and brimstone art critic, a combination of john leonard, pauline kael and michiko kakutani in influence and breadth of reign. his word could make or break an artist, and ruskin was never one to hold his tongue. 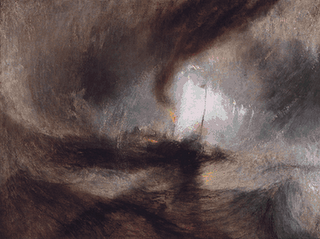 where others critiqued turner's 'snowstorm' as a mess of 'soap suds and whitewash,' ruskin declared it one of the best depictions of the sea ever painted. when ruskin declared that after raphael, painting in england had gone off-track, an entire movement, the pre-raphaelites, was born.

though ruskin was perhaps closest to millais, reviewing his work most favorably, all of the pre-raphaelites became ruskin's family symbolically. literally, euphemia chalmers gray became his wife. this peaceful moment, however, was not to last. 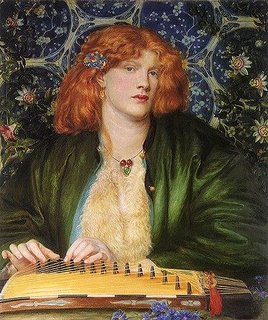 whistler had begun to become close with the artists in the pre-raphaelite group himself, though whistler held no particular sway to ruskin. he, but not only he, began to introduce the japanese senses of art and design to rossetti and the crew, and it had begun to have an influence. it was early, so the profound influences upon western art were still to come, but see in this 1865 painting, 'the blue bower,' by dante gabriel rossetti, both the japanese ume in the tiles in the back, but also the japanese musical instrument. (it has further been suggested that the langourous poses and flowing gowns of the women in the paintings might have their genesis in the japanese art as well.)

though he had reputedly written of his appreciation for japanese art, when it began to 'invade his territory' ruskin began to decry it. the bitter depressions and madness that were to fully take over his later life began. 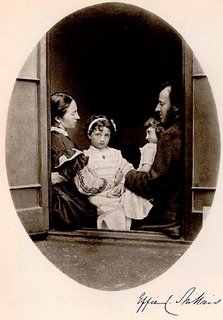 after six years of marriage, his wife divorced him due to his incurable impotence. they had never consummated the marriage. and then she married millais! ruskin began to savage millais' work in reviews (though, as he's thought to be the most popular of the pre-raphaelites, this apparently didn't have the effect ruskin might have hoped). (photo of millais and family by lewis carroll)

one wonders what it was that whistler did to him personally, though perhaps his slow yet persistent influence over artists that ruskin felt he used to 'rule' (particularly millais, whose 'eve of st agnes,' above, was said to be influenced by whistler's 'white girl') was enough. perhaps he simply did not pay 'the great man' the homage he felt he deserved.

in any case, and in spite of having declared turner a genius for many of the same characteristics, ruskin wrote in his review about whistler's 'nocturne in black and gold: the fire rocket' this:

[the "eccentricities" of such art] "are almost always in some degree forced; and their imperfections gratuitously, if not impertinently, indulged. For Mr. Whistler's own sake, no less than for the protection of the purchaser, Sir Coutts Lindsay ought not to have admitted works into the gallery in which the ill-educated conceit of the artist so nearly approached the aspect of willful imposture. I have seen, and heard, much of Cockney impudence before now; but never expected to hear a coxcomb ask two hundred guineas for flinging a pot of paint in the public's face"1

whistler sued, and won in court (ruskin was too ill to attend), but he won but a farthing, leaving him bankrupt. both he and ruskin were exhausted and destroyed by the battle, ruskin abandoned to a life of manic-depression, hallucinations, and heartbreak (having fallen in love with a 10-year-old girl), whistler needing to begin his life anew, with nothing.

posted by lotusgreen at 7:27 AM