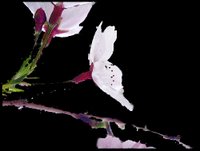 the influx of japanese art, craft, and idea is most commonly known for what it
did to art and craft in the west. idea has perhaps not been recognized as clearly. but in a culture where poetry had always rhymed, the japanese influence was profound. 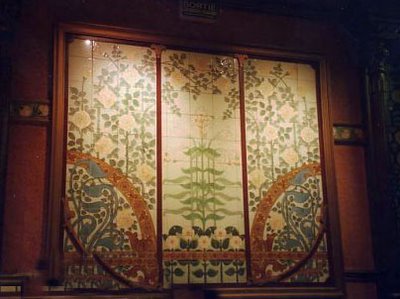 and a lovely mackintosh-styled site, it is

posted by lotusgreen at 5:38 PM 0 comments

by any other name 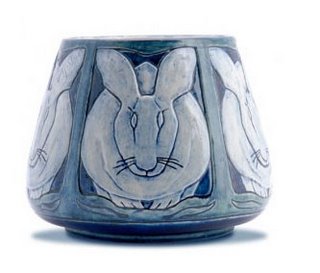 i guess we haven't yet mentioned many of the other names or styles that are japonisme, in one way or another, in disguise. Of course art nouveau, but also jugendstil, liberty style, arts and crafts, and many more.

the parts of japanese style elaborated on might be different in each, but a little research and the secrets are handed up easily.

how else does a japanese family crest, usagi, become a vase made by Marie de Hoa LeBlanc in 1902, a member Newcomb Pottery in louisiana, and expect to draw $75,000 at auction?

posted by lotusgreen at 2:56 PM 0 comments 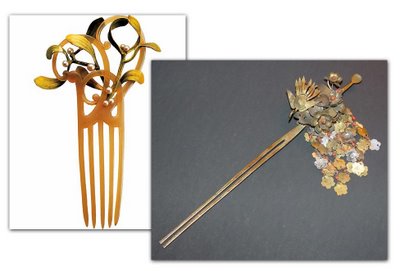 posted by lotusgreen at 2:09 PM 0 comments

japonisme: so many faces

i would really love to try to describe all the different kind of things that get labeled with that term, by someone or other. i would like to illustrate each with an example, but this sounds too ambitious for one sitting, so i'll just get started and add things as i go along. 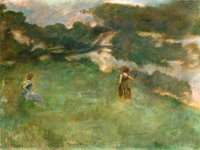 yes, there were other factors: a reaction to the industrial revolution, the arrival of the affordable train trip "out to nature" (which was, of course, ironically, part of that very revolution), new scientific discoveries into how humans see, even the invention of the portable painting kit, but the very number one thing without which the movement never would have started: that someone should say, in a place where westerners would hear it, essentially, "be here now."


(the two images here are jane avril by toulouse-lautrec, and the hermit thrush by thomas dewing. can you hear it singing?)

more bindings inspired by the orient 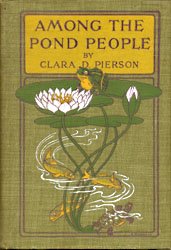 and one last binding, for the moment anyway (there are some exquisite covers for some lafcadio hearn books i have to dig up from my files somewhere....), from another stunning collection here.

posted by lotusgreen at 7:55 PM 0 comments

the vienna secession and wiener werkstätte 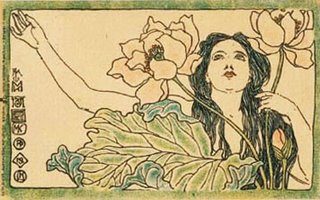 not that paris, that art nouveau alone, were influenced by the influx of japanese goods. many artists developed signatures or marks to mimic those used by the japanese. toulouse-lautrec's is famous (click for the exhibition):

but here are eight more. eight??! must be a group show or something? clicking on the image will take you to index. it's a fascinating collection, and the introduction is interesting as well.

i was thrilled to find an online bookseller with an entire section devoted to japonisme! handsome books, and the descriptions of the books, the authors, the designers and illustrators, and of japonisme itself, are priceless.

here is an illustration by sanchi ogawa for a book called japanese fairy tales, by teresa pierce williston. this brings me to a question to which i don't yet know the answer: why were children's books, around the world, so quick to embrace japonisme? maybe i'll learn that while i do this blog.

this beautiful cover is from c. yarnall abbott. while the previous example was a purely japanese scene done in a somewhat western manner, this image is clearly directly inspired by the japanese print: both subject and style.

the book, from 1902, is designed by sarah wyman whitman.

these and many more can be seen at the bookstore website, at the bookstore itself, and, along with many other booksellers, on ebay (user name: handbooks). i've discovered that ebay is a wonderful way to see old illustrated books; many sellers even display the entire book's illustrations: what a joy!

posted by lotusgreen at 5:41 PM 0 comments

from west to east, too

there were western influences on the japanese during this period as well. leaving aside for the moment all of these but those of some printmakers, i would like to point to two: hiroshi yoshida and yumeji takehisa .

hiroshi yoshida studied in the west, and in doing so was influenced in his use of color and perspective. & this is the grand canyon!

yumeji takehisa, i don't know as much about as yet, but though he has employed some trademark japanese print techniques, pattern, blocks of flat color, still this print appears to have more in common with the fashion illustrations in vogue than with ukiyo-e. (of course, this also illustrates how much the illustrators for vogue were influenced by the japanse!)

posted by lotusgreen at 3:18 PM 0 comments

what is japonisme? part I

for the last several days i have been scouring the internet for resources and find there's little agreement to anything (not that this should come as a surprise), mainly, the definitions, but also the history behind it, the range of its influence, etc. so today i will do my best to lay out what i have learned japonisme to be, and will return often, i'm sure, to correct, amend, edit and embellish, etc., and with your help perhaps arrive at something definitive.
in 1854 japan's doors were opened to trade by admiral matthew perry and his black ships. what followed was nothing short of life-altering. not only would art and design be changed, but music, theater, dance, religion, and philosophy as well.
there were two elements coming from japan at that time that comprised the strongest influencing factors: calligraphy and buddhism; both underlay everything else, and both had been borrowed from china. (see gaillard chair, above, with lines almost imitating japanese calligraphy, which had developed into something graceful, a tree limb in place of a ruler, poetry in place of prose.) 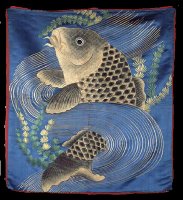 also coming from china was an ethic that some say was the breeding ground for buddhism itself: ancient chinese nature- worshipping religions. this, along with a developed buddhism as well switched the human/nature/deity paradigm that had developed in the west on its ear. very quickly nature went from what humans controlled to what humans were.

posted by lotusgreen at 3:11 PM 0 comments