awash in all they're (still) not telling us
yet bouyed by what they're not reporting.

it's seeming now that only rumi's right.

(above, film of the exact moment i walked through
the destroyed gates at woodstock.)

THIS WE HAVE NOW

This we have now
is not imagination.

This is not
grief or joy.

Not a judging state,
or an elation,
or sadness.

Those come and go.
This is the presence that doesn't.

AT THE BOMB TESTING SITE

At noon in the desert a panting lizard
waited for history, its elbows tense,
watching the curve of a particular road
as if something might happen.

It was looking for something farther off
than people could see, an important scene
acted in stone for little selves
at the flute end of consequences.

There was just a continent without much on it
under a sky that never cared less.
Ready for a change, the elbows waited.
The hands gripped hard on the desert.

Some people fleeing some other people.
In some country under the sun
and some clouds.

They leave behind some of their everything,
sown fields, some chickens, dogs,
mirrors in which fire now sees itself reflected.

On their backs are pitchers and bundles,
the emptier, the heavier from one day to the next.

In front of them some still not the right way,
nor the bridge that should be
over a river strangely rosy.
Around them, some gunfire, at times closer, at times farther off,
and, above, a plane circling somewhat.

Some invisibility would come in handy,
some grayish stoniness,
or even better, non-being
for a little or a long while.

Something else is yet to happen, only where and what?
Someone will head toward them, only when and who,
in how many shapes and with what intentions?
Given a choice,
maybe he will choose not to be the enemy and
leave them with some kind of life. 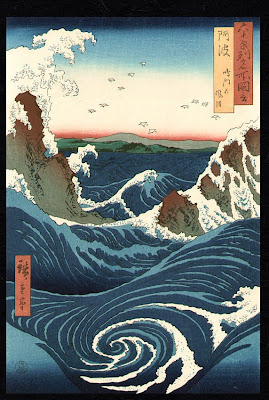 posted by lotusgreen at 4:43 PM 9 comments