when i was a young hippy, underground comix were all the rage, but of course we would never say 'all the rage.' we would say, 'far out,' or 'blows my mind,' or 'toooo much,' or maybe even 'outta sight!' but for sure we would say.... 'triiiippy.....'

of so many of the japanese prints we've seen we might ask, 'what were they smoking?!'
the answer could actually be, 'the same thing you were.' not only was weed legal and enjoyed by many, but it's not such a stretch to see its effects in the prints (of yoshitoshi and kunisada especially). 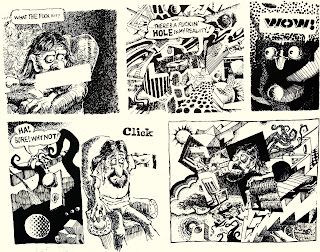 'a fuckin' hole in my reality,' indeed.

however, there was much more to learn about from the prints beyond just the unpredictability of demons. there were all the other things the westerners were learning from the japanese at that time. 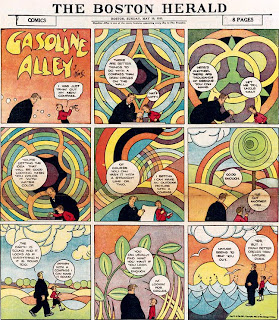 the outline. the strong graphic elements. the flat areas of color. the new and unexpected (to western eyes) uses of and juxta- position of pattern, color, and design. that so many of the prints were surreal goes without saying.

now i am not saying that dave sheri- dan (dealer mcdope) had seen jap- anese prints and used them for inspiration -- he may have, or may have not. 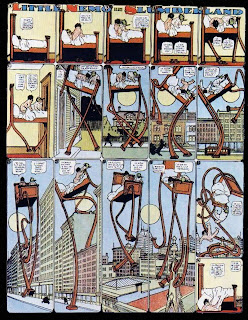 but i can suggest that some of their prede- cessors very likely did. artists like winsor mccay and frank king were wor- king at just that same moment where we here at japonisme usually hang out.

they were exposed to lautrec's posters, and the nabis and the printmakers of their times. they may also have been exposed to manga.

the prints' surrealism of melting bodies and emboldened design has become normal to our eyes.

but imagine being
the westerner
seeing them
for the very first time.

posted by lotusgreen at 1:04 PM 6 comments