this is for evan 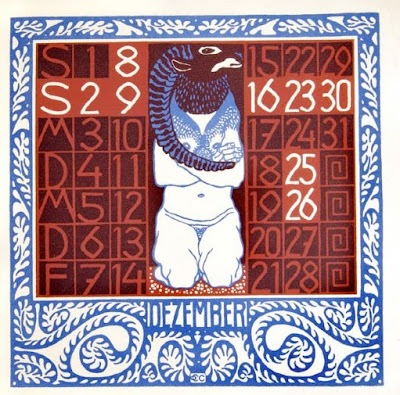 posted by lotusgreen at 2:39 PM 4 comments

the wiener werkstatte began just as the important journal,
ver sacrum, ended. while it had published calendars before, the participants outdid themselves, going out in glory, with their calendar for 1903, which also happens to be the only one nearly completely traceable today. 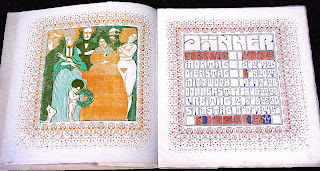 i will admit how i've cheated at the end,
but in the meantime, a little info.

Between 1897 and 1932, the Vienna Secession and the Wiener Werkstätte (Vienna Workshop) served as magnets for Austria’s avant garde. Unlike modernists in other European countries, these Austrians shared no concrete stylistic program, but rather were united by their belief in the Gesamtkunstwerk (total artwork): a completely coordinated visual environment. 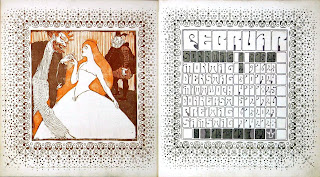 Although the Gesamtkunstwerk’s proponents anticipated many aspects of modern design, their underlying ideology was essentially conservative. The architect Josef Hoffmann and the designer Koloman Moser, collaborators at the Secession and co-founders of the Wiener Werkstätte, wanted to recapture the aesthetic values of the preindustrial era, to make whole a world that seemed to be fragmenting. Vienna’s artists and artisans were engaged in a communal project aspiring to offer nothing less than spiritual redemption. 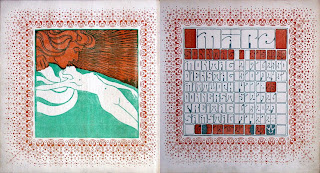 The totalizing tendencies of the Secession were manifested both in its evangelical mission and in its attempt to achieve a synthesis of multiple art forms. Not only painters, but also architects and designers were admitted to the organization. “We recognize no difference between high art and low art,” the Secessionists declared in Ver Sacrum. “All art is good.” A pronounced interest in the applied arts was expressed in the type of work shown at the Secession as well as in the care lavished on customized installations. 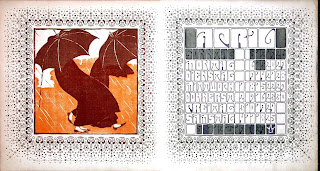 The Secession’s most ambitious and successful Gesamtkunstwerk was its 1902 exhibition devoted to Ludwig van Beethoven. This multi-media presentation included interior design, sculpture, graphics, painting and music, but the best remembered contribution was probably Klimt’s raised frieze, which encapsulated the reigning artistic philosophy with unparalleled concision. Quoting Schiller’s “Ode to Joy” (the poem set to music in Beethoven’s Ninth Symphony) in the mural’s final, redemptive panel, Klimt proclaimed his solidarity with the poet and the composer as emissaries of aesthetic deliverance. 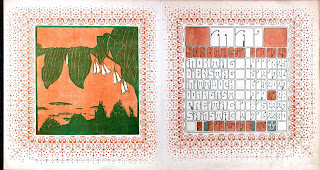 The philosophy of the Gesamtkunstwerk was unabashedly elitist: the self-anointed would lead, all others must follow. And though the Secession ostensibly comprised a community of like-minded individuals, its members were not particularly inclined to democratic compromise. In 1905, friction between the Secession’s more traditional easel painters and the Gesamtkunstwerk devotees caused the latter group (including Klimt, Hoffmann and Moser) to walk out en masse. 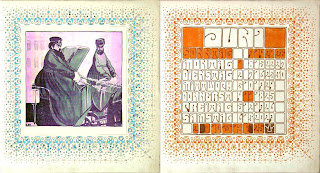 The Wiener Werkstätte, established in 1903, now became the sole institution uniting Austria’s more advanced artists. While painters such as Klimt and, a bit later, the Expressionists Oskar Kokoschka and Egon Schiele were drawn into its orbit, the Werkstätte was first and foremost a design collective. As a result, the organization’s interpretation of the Gesamtkunstwerk was less introspective, more practical and expansive than had been the case at the Secession. 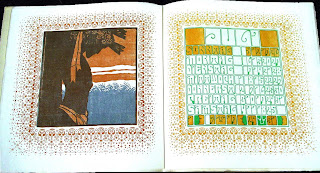 In 1932, after several brushes with bankruptcy, the Wiener Werkstätte closed its doors for good. Despite its ultimate demise, however, the Werkstätte left a powerful legacy. In addition to anticipating the meshing of form, function and construction intrinsic to modern design, the Gesamtkunstwerk concept has done much to shape the way we relate to objects. The creation of a cohesive “look”—from Donna Karan separates to Ralph Lauren home furnishings—has by now become a given of the upscale lifestyle to which many Americans aspire. Global capitalism and a highly evolved advertising industry provide our contemporary design moguls with a breadth and reach that Hoffmann, in his wildest dreams, could never have anticipated.

The premium charged for design and marketing, above and beyond the raw cost of manufacture, has become enormous today, when both discount sneakers and $150 Nikes are produced in the same Filipino sweatshops. To be sure, this is not the preindustrial Eden imagined by the Wiener Werkstätte’s founders, and present-day design sensibilities are more eclectic, less philosophically charged, than the early twentieth-century Gesamtkunstwerk. Yet objects continue to provide comfort in times of uncertainty, and the attempt to find comprehensive solutions remains seductive, even though we should know that such schemes never really work. 1 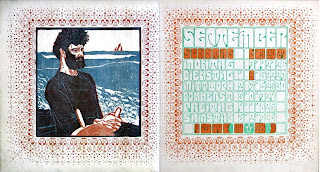 Ver Sacrum was a magazine publishing the works of most important artists of Viennese Secession between 1898 and 1903. The prints published in this short-lived but extremely important periodical are very valuable - names like Gustav Klimt, Emil Orlik, Koloman Moser or Alphonse Mucha are among those who published here. Some of the artists became famous in part thanks to the magazine. 2 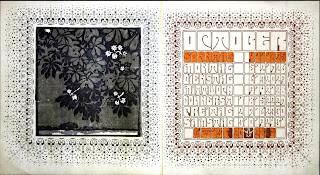 Ver Sacrum was the major publication of the Vienna Secession movement, a group of artists who banded together in Vienna at the turn of the century to challenge what they saw as the conservative, academic bent of the city's art establishment. Their membership included the artists named above as well as Gustav Klimt, Josef Hoffmann, and others.

Ver Sacrum was published from 1898 to 1903, running essays on art theory as well as original artwork by the members and other artists whose work influenced them. In conjunction with the magazine, a yearly calendar was published, this being the last of them. In printed, illustrated wrappers which show some toning, else fine. 3 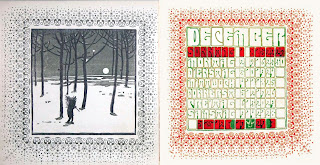 now i fess up. the december just above is actually just november with the first part changed. wrong number of days and all. it's got the correct image, but i could not find the month form itself. and the image for june is by the correct artist, but is not the original from the calendar. that, i couldn't find either, and finding work by this artist at all was difficult because she was russian, and there are about 4,683 spelling variations for her name.

but again, i don't know of anywhere you will find even this much of the completed calendar.

posted by lotusgreen at 3:31 PM 6 comments