If when my wife is sleeping

and the baby and Kathleen

and the sun is a flame-white disc 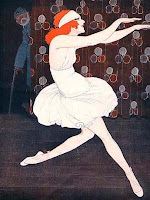 if I in my north room

waving my shirt round my head

and singing softly to myself:

"I am lonely, lonely,

I was born to be lonely,

If I admire my arms, my face,

against the yellow drawn shades,--
(cont. after video)


Who shall say I am not

the happy genius of my household? 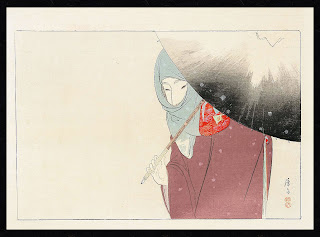 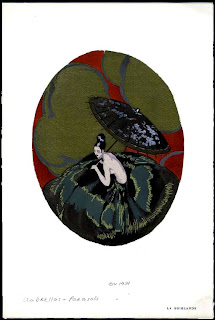 The parasol is the umbrella's daughter,

And associates with a fan

While her father abuts the tempest

And abridges the rain. 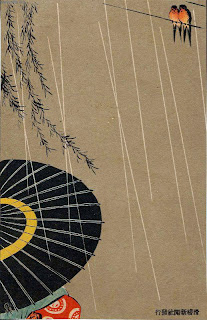 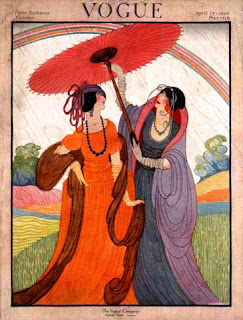 The former assists a siren

In her serene display;

But her father is borne and honored,

And borrowed to this day.

THE FROG WHO WOULD A WOOING GO 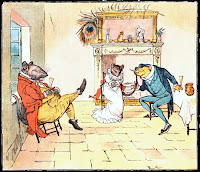 A Frog he would a-wooing go,
Whether his mother would let him or no.

Off he set with his opera-hat.
On the road he met with a Rat.

"Pray, Mrs. Mouse, now give us some beer,
That Froggy and I may have good cheer."

"Pray, Mr. Frog, will you give us a song?
Let the subject be something that's not very long." 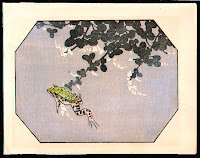 "Indeed, Mrs. Mouse," replied the Frog,
"A cold has made me as hoarse as a hog."

"Since you have caught cold, Mr. Frog," Mousey said,
"I'll sing you a song that I have just made." 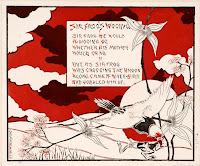 As they were in glee and merrymaking,
A Cat and her kittens came tumbling in.

The Cat she seized the Rat by the crown,
The kittens they pulled the little Mouse down.

This put Mr. Frog in a terrible fright,
He took up his hat, and he wished them good night.

As Froggy was crossing it over a brook,
A lilywhite Duck came and gobbled him up.

So here is an end of one, two, three--
The Rat, the Mouse, and little Froggy.

this tale is so very odd, one begins to wonder who these critters are meant to symbolize, and what the 'backstory' is. i couldn't find it, though i found a wonderful bit of very serious satire about it, as well as various versions of the poem itself (and a short story-ization as well).

this, like yesterday's tale, does not have a happy ending. it and the illustrations are a bit perverse (he's kissing her tail?). are there other cultures with much the same story (as we've seen with others)?

and why do all our frogs wear trousers? do we have graphics, as do the japanese, that allow for the simple grace of this worthy creature? 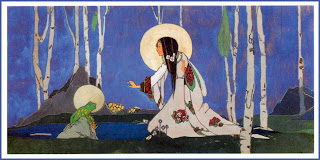 well, then, there is always this.

posted by lotusgreen at 7:40 PM 2 comments 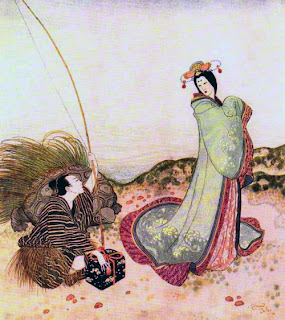 Many years ago a boy lived down by the sea, where the great green waves came riding in to break on the shore in clouds of salty spray. This boy, Urashima, loved the water as a brother, and was often out in his boat from purple dawn to russet evening. One day as he was fishing, something tugged at his line, and he pulled in. It was not a fish, as he expected, but a wrinkled old turtle.

"Well," said Urashima, "if I cannot get a fish for my dinner, at least I will not keep this old fellow from all the dinners he has yet to come." For in Japan they say that all the turtles live to be a thousand years old.

So the kind-hearted Urashima tumbled him back into the water, and what a splash he made! But from the spray there seemed to rise a beautiful girl who stepped into the boat with Urashima. She said to him: "I am the daughter of the sea-god. I was that turtle you just threw back into the water. My father sent me to see if you were as kind as you seemed, and I see that you are. We who live under the water say that those who love the sea can never be unkind. Will you come with us to the dragon palace far below the green waves?"

Urashima was very glad to go, so each took an oar and away they sped.

Long before the sun had sunk behind the purple bars of evening, Urashima and the Dragon Princess had reached the twilight depths of the under sea. The fishes scudded about them through branches of coral and trailing ropes of seaweed. The roar of the waves above came to them only as a trem- bling murmur, to make the silence sweeter.

Here was the dragon palace of seashell and pearl, of coral and emerald. It gleamed with all the thousand lights and tints that lurk in the depths of the water. Fishes with silver fins were ready to come at their wish. The daintiest foods that the ocean holds for her children were served to them. Their waiters were seven dragons, each with a golden tail.

Urashima lived in a dream of happiness with the Dragon Princess for four short years. Then he remembered his home and longed to see his father and his kindred once again. He wished to see the village streets and the wave-lapped stretch of sand where he used to play.

He did not need to tell the princess of his wish, for she knew it all, and said: "I see that you long for your home once more; I will not keep you, but I fear to have you go. Still I know you will wish to come back, so take this box and let nothing happen to it, for if it is opened you can never return."

She then placed him in his boat and the lap- ping waves bore him up and away until his prow crunched on the sand where he used to play.

Around that bend in the bay stood his father's cottage, close by the great pine tree. But as he came nearer he saw neither tree nor house. He looked around. The other houses, too, looked strange. Strange children were peering at him. Strange people walked the streets. He wondered at the change in four short years.

An old man came along the shore. To him Urashima spoke. "Can you tell me, sir, where the cottage of Urashima has gone?"

Gone! His father and mother, his brothers and playmates, and the cottage he loved so well. How he longed to see them; but he must hurry back to the dragon palace, for now that was his only home. But how should he go? He walked along the shore, but could not remember the way to take. Forgetting the promise he had made to the princess. he took out the little pearl box and opened it. From it a white cloud seemed to rise, and as it floated away he thought he saw the face of the Dragon Princess. He called to her, reached for her, but the cloud was already floating far out over the waves.

As it floated away he suddenly seemed to grow old. His hands shook and his hair turned white. He seemed to be melting away to join the past in which he had lived.

When the new moon hung her horn of light in the branches of the pine tree, there was only a small pearl box on the sandy rim of shore, and the great green waves were lifting white arms of foam as they had done four hundred years before.

(here's the wonderful version i've quoted -- download the whole illustrated book here--, and here is where i found the evelyn paul illustrations--gutenberg in dutch)

posted by lotusgreen at 7:12 PM 0 comments 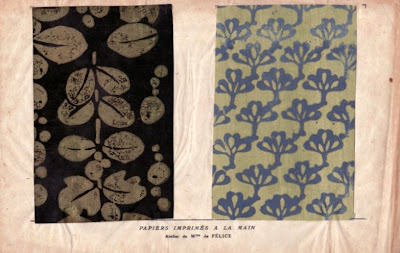 while doing some research for this post, i came across a fascinating statement. armond fields, in his 1983 book henri riviere, says, 'in 1879 there appeared a weekly magazine which was unlike any other of the time: la vie moderne. what make it so extraordinary were its illustrations, which were not black and white wood engravings like the other journals, but were color gillotypes, -- color photoengravings.

charles gillot had invented the process to faith- fully reproduce drawings and sketches. it involved making color separations for each color to be printed. it required technical mastery of both photography and engraving, as the separations were prepared by a skilled engraver and the plates were made by a photographer. interestingly enough, this process, which altered the course of color printing, was invented by an ardent collector of japanese prints, who was perhaps influenced by them in his invention.' 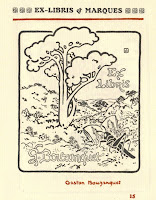 in doing some research on this intriguing suggestion i stumbled across a blog showcasing much of what was being done in publishing (on a letterpress level?) during this period. one can find fascinating examples tracing the development of trends in design, illustration and typography during this exciting transitional phase. 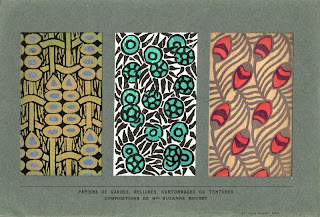 the increasing influence of the japanese work on all three elements is obvious (including in some places where it seems completely gratuitous), and one can feel the excitement building as possibilities continue to open before the artists. 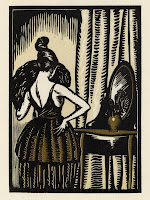 from georges auriol to sarah bernhardt, from the arts magazine cocorico to madame bovary, the presentation is beautifully simple and all in french. will someone please tell me what he is saying?

posted by lotusgreen at 3:29 PM 2 comments