i came across this extraordinary frank lloyd wright library table in one of my books and i was in awe of it. the metropolitan museum of art, in new york city, was credited for having it in their collection so i went there and found it... and more. 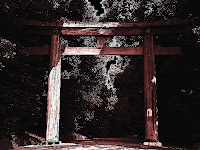 the table is from wright's francis w. little's house (top image) and a shot of the house's fully recon- structed, in the museum, little house living room was there as well. 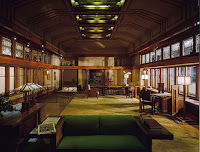 the site says, "The Frank Lloyd Wright Room was originally the living room of the summer residence of Frances W. Little, designed and built between 1912 and 1914 in Wayzata, Minnesota, a suburb of Minneapolis. The room epitomizes Wright's concept of "organic architecture," in which the building, setting, interior, and furnishings are inextricably related. The house is composed of a group of low pavilions interspersed with gardens and terraces, which, in plan, radiate from a central symbolic hearth.

The Frank Lloyd Wright Room also exemplifies one of Wright's most important contributions to modern architecture: the idea of spatial continuity. Low over- hanging roofs and geometric window "grilles" with stylized plant motifs once linked the interior visually and spatially to the wooded site overlooking Lake Minnetonka. The living room itself is not merely a single, enclosed volume but a series of horizontal levels surrounded by glass, which allows the interplay of natural light and the rich, earthy tones that Wright employed throughout the room." 1

as the style looked so clearly japan-influenced, i suddenly remembered that one of the earliest americans to go to japan, edward morse (here and here), had actually written and illustrated a book called "japanese homes and their surroundings." that book is completely online as well. 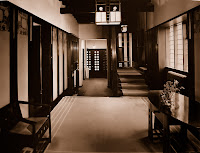 this book is stunningly charming and interesting: "Within twenty years there has gradually appeared in our country a variety of Japanese objects conspicuous for their novelty and beauty, — lacquers, pottery and porcelain, forms in wood and metal, curious shaped boxes, quaint ivory carvings, fabrics in cloth and paper, and a number of other objects as perplexing in their purpose as the inscriptions which they often bore.

Most of these presented technicalities in their work as enigmatical as were their designs, strange caprices in their ornamentation which, though violating our hitherto recognized proprieties of decoration, surprised and yet delighted us. The utility of many of the objects we were at loss to understand; yet somehow they gradually found lodgment in our rooms, even displacing certain other objects which we had been wont to regard as decorative, and our rooms looked all the prettier for their substitution.

We found it difficult to formulate the principles upon which such art was based, and yet were compelled to recognize its merit. Violations of perspective, and colors in juxtaposition or coalescing that before we had regarded as in-harmonious, were continually reminding us of Japan and her curious people. Slowly our methods of decoration became imbued with these ways so new to us, and yet so many centuries old to the people among whom these arts had originated. Gradually yet surely, these arts, at first so little understood....

The first sight of a Japanese house, — that is, a house of the people, — is certainly disap- pointing. From the infinite variety and charming character of their various works of art, as we had seen them at home, we were anticipating new delights and surprises m the character of the house; nor were we on more intimate acquaintance to be disappointed. As an American familiar with houses of certain types, with conditions among them signifying poverty and shiftlessness, and other conditions signifying refinement and wealth, I was not competent to judge the relative merits of a Japanese house.

The first sight, then, of a Japanese house is disappointing; it is unsubstantial in appearance, and there is a meagreness of color. Being unpainted, it suggests poverty; and this absence of paint, With the gray and often rain-stained color of the boards, leads one to compare it with similar unpainted buildings at home, — and these are usually barns and sheds in the country, and the houses of the poorer people in the city. With one's eye accustomed to the bright contrasts of American houses with their white, or light, painted surfaces; rectangular windows, black from the shadows within, with glints of light reflected from the glass; front door with its pretentious steps and portico ; warm red chimneys surmounting all, and a general trimness of appearance outside, which is by no means always correlated with like conditions within, — one is too apt at the outset to form a low estimate of a Japanese house.

An American finds it difficult indeed to consider such a structure as a dwelling, when so many features are absent that go to make up a dwelling at home, — no doors or windows such as he had been familiar with; no attic or cellar; no chimneys, and within no fire-place, and of course no customary mantle; no permanently enclosed rooms; and as for furniture, no beds or tables, chairs or similar articles, — at least, so it appears at first sight. 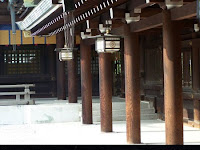 One of the chief points of difference in a Japanese house as compared with ours lies in the treatment of partitions and outside walls. In our houses these are solid and permanent; and when the frame is built, the partitions form part of the frame-work. In the Japanese house, on the contrary, there are two or more sides that have no permanent walls. Within, also, there are but few partitions which have similar stability; in their stead are slight sliding screens which run in appropriate grooves in the floor and overhead. These grooves mark the limit of each room.

The screens may be opened by sliding them back, or they may be entirely removed, thus throwing a number of rooms into one great apartment. In the same way the whole side of a house may be flung open to sunlight and air. For communication between the rooms, therefore, swinging doors are not necessary. As a substitute for windows, the outside screens, or shoji, are covered with white paper, allowing the light to be diffused through the house." 2 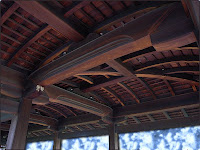 we have looked at this before (here and here and here and here, etc.), but it bears repeating. every single one of the points in the met's description of wright's contributions was written about nearly 30 years earlier in morse's descriptions of japanese homes. and we know too that mackintosh, maybeck, and greene & greene were influenced thusly as well.

it's all a beautiful thing to see, don't you think?

posted by lotusgreen at 7:15 PM 6 comments 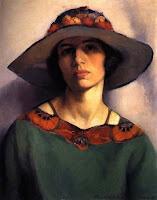 One more fact remains to be considered in its bearing upon this question [of whether the feminist movement is good or evil]. It is this, paradoxical as it may appear, that the strongest faculties of women are such as, if exercised without social or political restraint, will most surely estrange them, if not from the feelings, from the habits and associa- tions of the traditional female life. 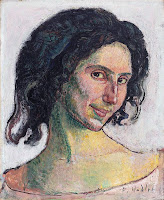 Women are intelligent; they are not creative. Whether in their home or beyond it, their successes can only be achieved through the contact with other minds; the impulse to mental action must always come to them from without, or at least the form in which the impulse will be clothed. 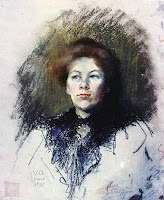 That men possess the productiveness which is called genius, and women do not, is the one immutable distinction that is bound up with the intellectual idea of sex. We know that women have seldom, perhaps never, been great artists or great com- posers, and that the number of female writers who can be called great is very small as compared with the number of those who make, or have made, literature the business of their life.

We know also that they may, as far as mental qualification is concerned, make good lawyers, doctors, and financiers. Their new ambitions will instinctively turn towards these more purely intellectual and also more militant forms of activity; and therefore towards a life which, however it may lack manliness, will still, as far as it goes, be masculine. 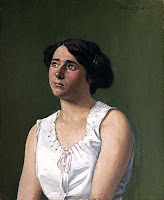 Genius is a patent of individuality; a title to the performance of every function not barred by pre-existing duty to which it may lead the way. If women, as a race, possessed genius, their present opportunities would suffice to them ; if not, they might justly demand others. 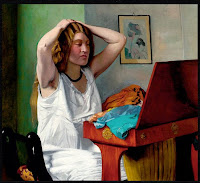 We might have an art, a science, a legislation, which would be truly feminine — a feminine activity which might safely compete with that of man, because it would be, in the full sense of the word, supplementary to it. 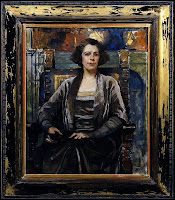 But this is supposing a universe other than our own. Women, as they are now created, can be individual only in the limited existence to which circumstances have consigned them. 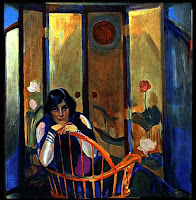 Within that existence they may still be greatly improved; beyond it — this is a commonplace truth, but none the less needing to be repeated — they will not be improved women; they will only be inferior men.

from The Future of English Women,
by Mrs. A. Sutherland Orr, 1878

posted by lotusgreen at 4:58 PM 8 comments