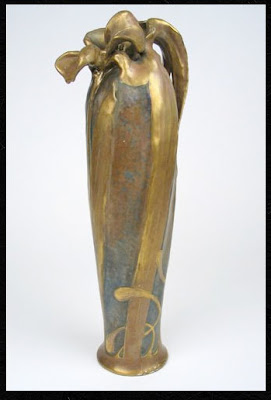 sometimes i'm just overwhelmed by the beauty of this stuff. does it appear that way to you too?

after a day of research, i'd say the most i've learned is that the clay in your location is very very important, and that many nooks, crannies & villages have distinctive styles of the porcelain/pottery that come from their town.

but i am so grateful that more every day is available online, that others seem to find this important as well, and that one can come across articles like this one. it's not precisely on topic with these particular illustrations, but it's not exactly not, either. it reveals more of the complexity of the incoming japonisme, and some of the importance of ceramics as cultural artifact.

and besides, it's by gabriel weisberg.

JAPANESE ART ON A PLATE

At the Paris World’s Fair of 1867 there was immense interest in a ceramic service decorated by Félix Bracquemond for Eugène Rousseau. It was considered to be revolutionary in the evolution of dinner-service decoration, as it was not only the first in France in which Japanese motifs were used, it was also the first to break from traditional schemes of plate decoration.

It at once became the touchstone by which other decorators using Japanese motifs were judged, and remained successful for decades. Other versions were produced after Rousseau (1827-1891), its primary promoter, sold his business in 1885 to Ernest Leveillé. He in turn sold it to Harant et Guignard, known as ‘Maison Toy’, in 1902. Louis Harant of Maison Toy continued to edit the service until 1938.

The Bracquemond- Rousseau service demonstrates that there was a commercial market for ceramic decoration in this style. However, while it may have been the first of its kind, and eminently successful, it was not the only early table service influenced by Japanese art.

In 1873-74 another service was shown at the exhibition of the Union Centrale des Arts Décoratifs in Paris. 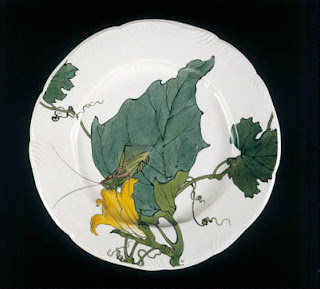 Commis- sioned by the jeweller Frédéric Boucheron, designed and painted by Henri Lambert, and produced for Eugène Rousseau at Creil- Montereau, it is possibly as large as the Bracquemond-Rousseau service. Although comparable in quality to the earlier service, it appears to exist only as one set in a private collection in Paris, together with a few pieces in the Musée National Adrien Dubouché, Limoges, and there is no evidence that it was commercially manufactured.

As a result, it has remained almost entirely unknown, and is published here for the first time. Its story makes clear how ceramic decoration became the way in which Japonisme was introduced to a public that had the financial means to purchase such table services for their homes. (read the rest of the article here)

posted by lotusgreen at 8:17 PM 6 comments 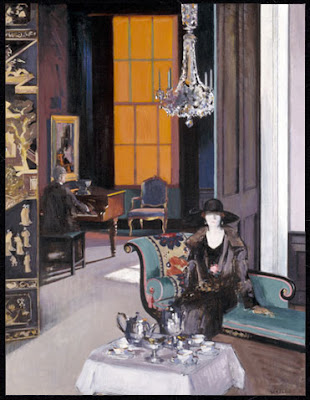 from yarnstorm i learn today about the scottish colourists, whose wonderful works may be found at the kelvingrove art gallery and museum in glasgow, and elsewhere. 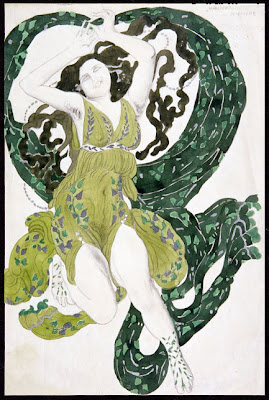 The Age of Enchantment

Beardsley, Dulac and their Contemporaries 1890-1930
The exhibition of British fantasy illustration will be the first such exhibition in Britain and the first worldwide for over 20 years. All works come largely from British museums and private collections, many of these will never have been seen publicly before. Borrowing from the past, illustrators such as Aubrey Beardsley, Edmund Dulac and Kay Nielson had lavish colour plates published in children's books such as The Arabian Nights, which became the coffee table books for a new age.

(featuring online lectures, videos, and comments on the times and the artists.) 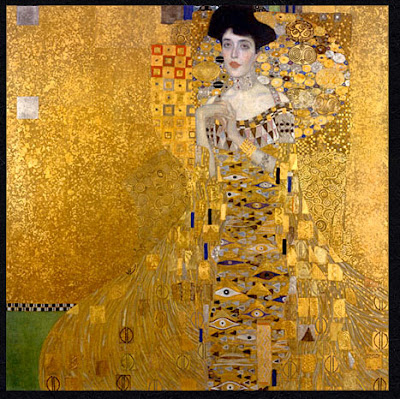 regarding the neue gallery, christopher benfey (who wrote the great wave about the historical process of japonisme), in slate magazine says, "The stratospheric price that cosmetics maven Ronald S. Lauder shelled out for Gustav Klimt's 1907 society portrait Adele Bloch-Bauer I—reportedly $135 million, [is] the most ever paid for a work of art....

"No American has done more than Lauder, a former ambassador to Austria, to raise the visibility (and enhance the value) of often neglected German and Austrian art in the United States.

The Bloch-Bauers were Jewish and the Nazis liked Klimts. Adele died in 1925 of meningitis. After Germany annexed Austria in 1938, her husband fled to Switzerland, where he died in 1945, having left his art collection behind. The Nazis put three of the paintings in the Austrian Gallery and sold the rest. A complicated restitution case played out over many years, eventually going to the U.S. Supreme Court, which ruled that Mrs. Altmann, who lives in Los Angeles, could sue the Austrian government in American courts for her family's lost property. In January, she was awarded the portrait of her aunt along with four other Klimt paintings, including a later portrait of Adele and three extraordinary landscapes (a genre in which Klimt excelled). During the legal maneuvering, Ronald Lauder remained a staunch supporter of Mrs. Altmann, and his loyalty was richly rewarded in the privately arranged sale."

posted by lotusgreen at 3:17 PM 4 comments

all we are saying 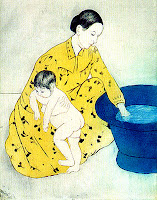 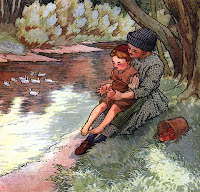 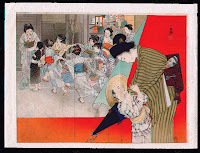 posted by lotusgreen at 4:16 PM 5 comments 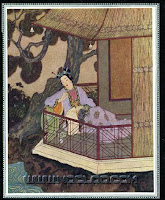 i am not a hokusai expert, so i am still vulnerable to the wonder encountering a new area of his talents fosters. so when moon river mentioned a site with books illustrated by him, i went to check it out. 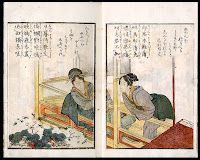 my first reaction was that these were different from any hokusai i remembered seeing; they were more narrative, with more depth to the characters. two books are offered. one is a collection of limerick-type poems (humorous, perhaps a bit ribald), none of which could i find a translation for. though the women featured look neither ribald not humorous, they do look more like real women than one usually finds in ukiyo-e. 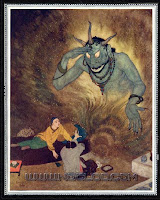 when i first saw this one i immediately thought of s. clay wilson's 'the checkered demon.' but as i paged through the illustrations from edmond (or edmund--he changed it) dulac, i began to feel that the similarities were even more striking.

hmmmm, i thought... could dulac have seen them? "Dulac was born in Toulouse, France, 22 October 1882, the son of a commercial traveller. He began drawing and painting at a very early age, and his holidays were spent copying Japanese prints." 1 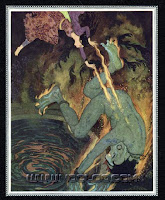 discussing another artist, bpib says, "Goble [was] well-versed in watercolor techniques and very influenced by the same Japanese techniques that fascinated Dulac." (though they don't mention this in dulac's bio).

according to wikipedia, "The Jātaka Tales [the books hokusai was illustrating] refer to a voluminous [547] body of folklore-like literature concerning the previous births (jāti) of the Buddha." 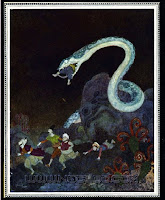 hmmmm, i wondered... could there be any actual relationship between these stories and the sinbad ones? or was the similarity of the illustrations merely coincidence, or perhaps inspiration?

"I have now followed the Western history of the Buddhist Book of Birth Stories along two channels only. Space would fail me, and the reader's patience perhaps too, if I attempted to do more. But I may mention that the inquiry is not by any means exhausted. A learned Italian has proved that a good many of the stories of the hero known throughout Europe as Sinbad the Sailor are derived from the same inexhaustible treasury of stories witty and wise." wrote thomas william rhys davids in 1880. 2 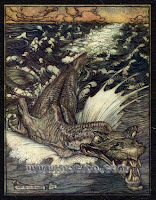 "These 'Jakata stories' about the Buddha were translated into Persian, Greek, Latin and Hebrew and formed the basis of some of the most famous story sequences of the Common Era - Sinbad, the Arabian Nights and Aesop's Fables - the latter being compiled by a monk in 14th century Byzantium."3

as has been mentioned here before, dulac was certainly not the only illustrator of his time to be influenced by the japanese prints. to mention only two others here by no means excludes anyone. in fact one would be hard pressed to find one who wasn't. 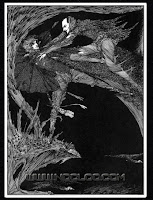 as dulac, along with arthur rackham and harry clarke and countless others demonstrate with their numbers, the phenomenon of japonisme was deeper and more labyrinthine than we have even begun to discuss.