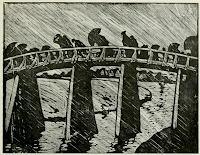 In our narrow-minded fuss over progress -- while displaying an artistic hubris that only listens to its own voice -- we would have already reached complete bankruptcy, despite the short duration of the modern movement, if Japanese art had not served it as a pillar. With few exceptions, every innovation we wanted to achieve in the realm of natural forms here in Europe had already been done as well, or often much better in Japan -- imparted to us with a certain deviation from its national style.

In Japan all the preconditions were at hand for a tendency toward this quasi-naturalistic sort of art: not organically-arranged forms in the manner of Greek art, but rather effects with completely smooth surfaces; instead of monumental structures, playful, simple forms whose only function is to be held in the hand and to be tenderly observed by an individual.

A rich technique, and nonetheless one which at times rests in the quality of handwork. A loving examination of nature, a measured stylization, one that has been practiced for centuries. A sensitivity for color, taken to its extreme, besides a good deal of plain childlikeness, a joy in the bizarre, in the wonderful ways of nature. It is an art from which one can learn an infinite amount and which could just as easily lead one astray. 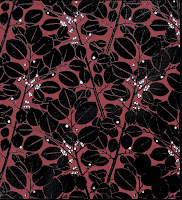 Whoever is used to see art forms as something not coincidental -- as we should all be, the devotees of Winkelmann's art history -- who ever sees them instead as the necessary historical result of the general development of art, will find it unlikely that our century, which experienced a complete crisis of all views and lifestyles as a result of the appearance of the natural sciences, would be able to create its artistic expression purely from the reserve of the past.

A period that sets itself so strongly apart from the past, must, and will create for itself a new sphere of shapes, which one day will be recognized as the style of the natural scientific age. 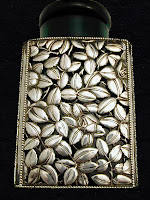 here i offer a few more images from the book/exhibition in my last post, and some extrapolations. we've seen before the design inspirations that were the triangle of glasgow, vienna, and poiret with japan but more is offered: the hoffmann at the bottom left, the moser in the middle, and the japanese on top. was the comb made for expert? we'll never know, but if it was, it might lessen its inspirational value. we'll never answer these questions. as we've seen, people constantly disagreed at the time as well. but nobody can disagree with awe.

see the whole year of 1898 of "ver sacrum" from which many of the images these two posts were taken.