in 1947, just after the war and the year i was born, two artists in japan were finding work, beyond their own "western-style" painting, as the painters of covers of women's magazines. since i first saw them in 2007 here, they have struck as very matisse-like. so i went out exploring.

closer examination proved me more accurate than i'd imagined. the two japanese artists whose work i most admired were toshio nakanishi and keiichi takasawa, i could find next to nothing about them in english, and the japanese translator (google) is pretty poor. but one thing i think i was able to ascertain was that the two that were my favorite were by keiichi takasawa, though they look nothing like his painting style (mostly of his wife, it is believed) which are not illustrated here. but there is similarity in style to his pamphlet on the kimono. 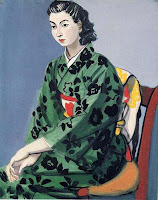 others were by toshio nakanishi whose painting style does look a lot his magazine colors. could i have misunderstood the japanese and these are really by nakanishi too?

but the similarities to matisse, not only in facial style and use of pattern, but in body language too. the outline is evident as are similar uses of flat color. though matisse, like frank lloyd wright, denied he was influenced by japanese art, the truth, also as with wright, was inescapable. as nakanishi began to fill in the flesh, matisse began to simplify it.

and the connections prove it not far-fetched. keiichi takasawa studied with foujita tsugeharu and both soon became integral parts of the paris art scene.

toshio naka- nishi was part of a group of rebellious artists, reaching to the west to grow parts of themselves. one like-minded artist, bijutsu shinron, said, "Of course one has to imitate. Even if we want to create works that are uniquely Japanese, we still need to look at Western paintings in order to supplement our own deficiencies. And I don't believe we have to set out to be 'Oriental.' If we simply express ourselves, the results will be sufficiently 'Oriental,' I'm sure." 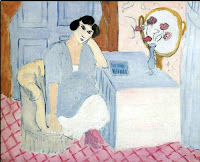 i find it quite interesting, the similarities each culture went through adjusting to the new influences, the new style. another young japanese artist, koide narashige, was moved to comment, "I often hear that Japanese women are rather shapeless and that nudes other than those of Western women are worthless. Those who say so want to make fun of shapes of women depicted in Japanese oil paintings. 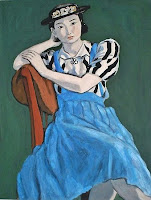 I do not know whether theirs is indeed the right form of the human body, but if a French beauty with thin hair about her lips comes at a distance of one foot from me, then, before being struck with her grace, I will be overwhelmed by her strange exaggerated nose, her deep-set piercing eyes and each pore of her rough skin, and I will possibly begin weeping. Some people despise short legs in view of a certain sort of individualism. In a streetcar I see fat young women sitting, their stocky legs not reaching the floor, but I can regard them as quite charming." 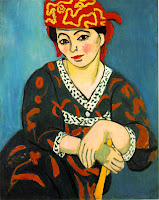 Monet
when the cataracts blanketed his eyes
Painted swirls of rage,
and when his sight recovered
Painted water lilies, Picasso claimed

I do not seek, I find,
and stuck to that story
About himself,
and made that story stick.
Damn the fathers.
We are talking about defiance.

Ostriker"Matisse, Too" from Poetry Magazine 12/06.