another 1897 poster calendar (the calendars) 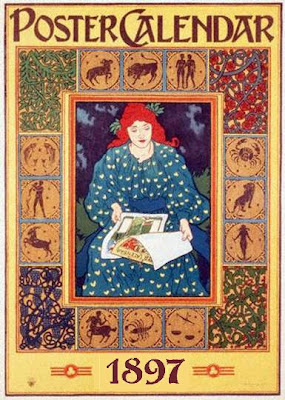 i find it so interesting that two of the three major artists
in the turn-of-the-century realm of graphics
in america both did the same thing at the same time. 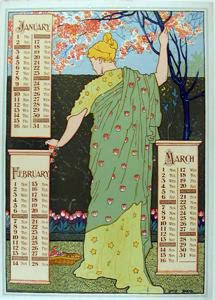 they had to know each other. louis rhead and edward penfield,
joined with will bradley, were bright lights then,
and have, astonishingly, stayed bright. 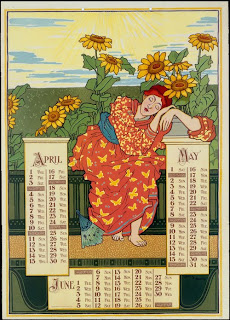 but i can't find any mention of the two,
rhead and penfield, together. were they friends?
competitors? or were their publishers competitors? 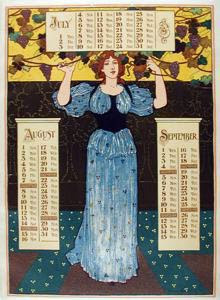 i wish i knew. 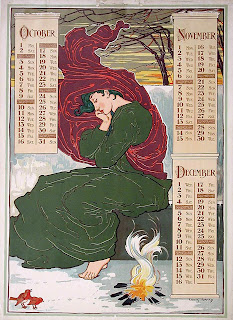 is it more a modern-day obsession
that we want to know all about
the personal lives? 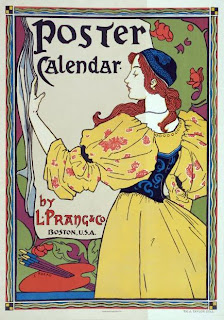 posted by lotusgreen at 6:12 PM 6 comments

this moment of the birth of the poster
around the world, was the perfect moment
for edward penfield to shine.

the calendar was, as we have seen,
an excellent use of the new, japanese-inspired,
methods of printing and design.

it's not difficult to stumble across
the covers of his calendars,
but how i love to play the detective
to find the other pages. 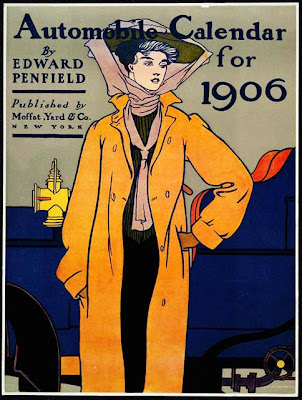 penfield's 1906 may have had no other pages.
i couldn't find anything, not even
images that looked like they may have had
a little calendar section on the bottom. 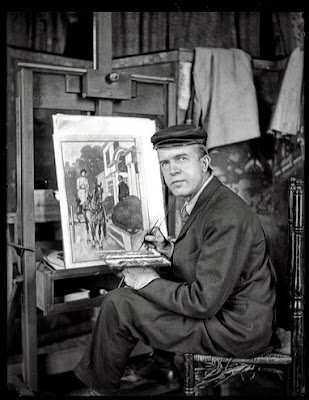 but it's been so much fun finding what i could.
i hope my obsession (and my thanks to
this artist) is shared by you too!

posted by lotusgreen at 7:45 PM 6 comments

1.
Black, under the candlesticks, moving in harness
To a slow music, we hang the sepulchre

And hear the herald angels sing, “He is not here.”
It is mid-November. The first snows

Have fallen silently over the town. I eat
Black pudding at the alter while a dove

Descends from the flaming tower. Later,
Dr. Rashdall, behind whose scholarship

A generation’s knowledge burns, will unmask
Newman. But now it is mid-November.
I eat black pudding and the dove descends.

2.
In a hollow tree by the bridge, an owl awaits.
The moon is full and white. The stars are out.

Tall elms surround the statue of a nymph
Where old Etonians, festive in Norfolk jackets, 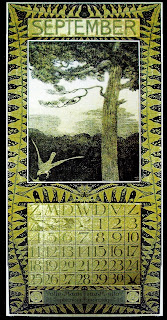 Boasting, “Dogs have never bitten me!” that day
We talked about Rossetti. Later, attacks of gout,

That horrible baby that looked like Gosse, a wheelchair
Wobbling on toward Trinity, webs covering my eyes.

But tonight the moon is full, and white. Thus 1904 begins.

with thanks to laura for scans!

posted by lotusgreen at 9:15 AM 2 comments