why are there flowers?

i was in the large waiting room shared by two teams of doctors and a testing lab, reading in a ten year old issue of natural history magazine an article entitled 'why are there flowers?'; the answer, which the magazine clearly thought would shock its readers, was quite obviously sex.

as it is, perhaps, for us humans as well. is it any wonder that we all, men and women alike, admire being, and/or seeing, the flowers? and when the hormones are flooding, we women often feel it of ourselves too: the lightness of purpose and the dance of life.

but most of us women know, or learn sooner or later, that that's not it; gender falls away in the face of substance. we are all quite more, men and women again alike, than the pursuit of the sum of our parts. (i remember suddenly realizing, at the age of three, that all the songs on the radio were love songs. how absurd! i thought.) 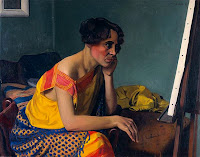 that's why when i come across an image of a woman who is not being portrayed for her loveliness first and foremost, it catches my attention. images of women who are thinking of something, who are complex, who have more knowledge than they are expected to have, sadly, often fall into the categories of dejection or exhaustion. but wait -- is there a glimmer more? 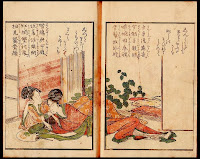 Each cell has a life. There is enough here to please a nation. It is enough that the populace own these goods. Any person, any commonwealth would say of it, “It is good this year that we may plant again and think forward to a harvest. A blight had been forecast and has been cast out.”

Many women are singing together of this: one is in a shoe factory cursing the machine, one is at the aquarium tending a seal, one is dull at the wheel of her Ford, one is at the toll gate collecting, one is tying the cord of a calf in Arizona, one is straddling a cello in Russia,

one is shifting pots on the stove in Egypt, one is painting her bedroom walls moon color, one is dying but remembering a breakfast, one is stretching on her mat in Thailand, one is wiping the ass of her child, one is staring out the window of a train 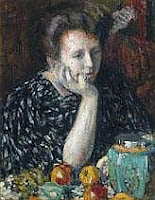 in the middle of Wyoming and one is anywhere and some are everywhere and all seem to be singing, although some can not sing a note.
Anne Sexton from “In Celebration of My Uterus” from The Complete Poems of Anne Sexton (Boston: Houghton Mifflin, 1981). Copyright © 1981

posted by lotusgreen at 3:27 PM 2 comments

PUTTIN' ON THE RITZ

Now, if you're blue
And you don't know
where to go to
Why don't you go
where fashion sits 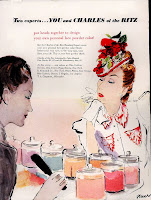 Dressed up like a million dollar trooper
Trying hard to look like Gary Cooper
Super-duper
Come, let's mix where Rockefellers
Walk with sticks or "umberellas"
In their mitts
Puttin' on the Ritz 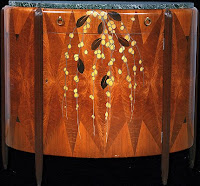 Puttin' on the Ritz

all this by way of saying congratulations and warm wishes to john textile blog hopper for his new carpet index blog!

posted by lotusgreen at 4:39 PM 2 comments

beware the email of april

hotmail was hijacked today. oddly, it's apparently not the first time because as i poke around the net looking for info i find identical reports from other months. i ask you--does microsoft not have the sense to fix this? it happened to many other people today too.

what happened was that every single contact i had listed in that email account got mailed a piece of spam touting cheap electronics equiptment. the emails looked exactly like they were from me. 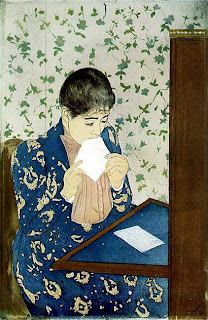 on top of this, hot- mail has only allowed me to alert 1/3 of my list of what happened, saying i had exceeded my daily outgoing limit!

all this to let you know that if you got some very strange mail that looked like it was from me.... it wasn't.

posted by lotusgreen at 5:44 PM 6 comments