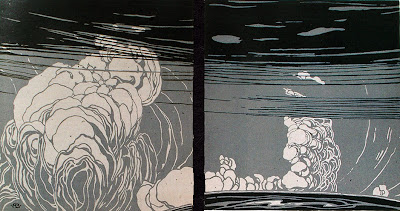 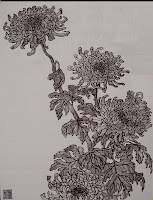 these images and the comments below are from the exhibition and catalogue of the same name as this post, held in vienna in the spring of 1990. again, we can see how the perspective and the artwork itself changes from country to country.

[commercial trade between austria and japan did not begin until 1869, as no treaties had yet been signed. at last the ships from austria were in japanese waters, and mercantile interests were being pursued.] 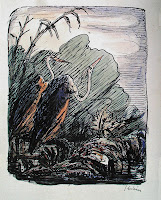 Art was included in their planning only to a minor extent -- at first. Export, import, commercial profits in the account-books, that was the motto. However, through its industrial products and handicrafts, Japan, only just linked to world trade connections, provided this very thing -- art, and did so in a fascinating way. In massive numbers and for prices that were as unprecedented as they were horrendous, china, lacquered works, bronzes, silk, all sorts of dyed textiles and other handicrafts were leaving the country en masse.

In a remarkably short time discriminating connoisseurs and artists in the west discovered in an art which up until now had been practically inaccessible, an expression of bourgeois culture that was comparable to theirs, highly cultivated, and refined, one that would maintain the search for new means of artistic expression, and, even more important, enrich it. "In every field", summarised the preface to the catalogue of the great Japanese exhibition in the Vienna Secession in the year 1900 "new experiments were taking place, a searching and feeling for new means of expression, which nature was not going to render simply by a naive enjoyment of the world of appearances. 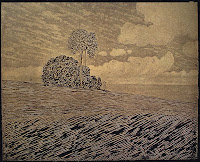 The intention to simplify, to find the quintessence of things became the criterion. The pioneers of art were searching for models they could build on, that they could develop within themselves. They found what they were looking for in the age-old culture of the East, in the art of the Japanese." "Japonisme", as it was called, meaning the sum total of all the very varied influences of Japanese style, moved in to conquer western creativity and sensibility.

First of all it overtook western Europe and then, after a certain lapse of time, moved from there to central and eastern Europe as well. In its more narrow sense Japonisme is a phenomenon that can be explained according to its own aesthetic principles; indeed, taking an example from the graphic arts or painting, this can be seen most clearly wherever the accustomed, almost mathematical exactness of perspective is sacrificed in favour of an emphasis on decorative surface. As well as this, the fact that the ornamentation can be repeated arbitrarily may well diminish individuality but the elements of timelessness and universality this adds are equally valid.

Europe discovered these principles most of all in the woodcuts and engravings, which were cheap and easy to get hold of. In spite of strict decorative composition and an equal emphasis on line, form and colour in these works the whole area of the page, whether painted on or left free was endowed with the utmost vitality. Exterior characteristics, such as the choice of extremely wide or high formats or fan-forms, which would have been incomprehensible without the Japanese were eagerly exploited by our artists as well.

This art, which had spread all over Europe, which had been welcomed mostly with exultation but also with occasional biting criticism, had become a special stylistic medium enabling it to satisfy not only the expressive needs of many artists, but also to correspond to a certain "Zeitgeist" in public taste. For Japonisme was more than just the transference of aesthetic feeling into works of art; above all it was a phenomenon in the history of intellectual development and taste. 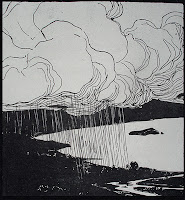 In its broadest sense Japonisme was encountered in almost every livingroom, an exotic spice which had become an integral part of almost every area of domestic and social life, whether in the sugar and tea tins decorated with Geishas, or mocca-cups from Karlsbad and Schlak-kenwerth, who set themselves up in competition with Imari and Satsuma; from ball-dresses a la kimono to postcards with blond "musumes"; from travelogues and novels, written by more authors than one Loti, to the first collections of Japanese art in our museums; from Viennese and Budapest educated classes, the Bildungsbiirger, citizens hungry for culture, who became Japan-connoisseurs and fanatics; from artists between Bleiberg and Prague, who wanted to see Nikko and Kyoto with their own eyes, to the dozens of manufacturers who produced Nippon knick-knacks for mantlepieces and glass-cabinets.

"Japonisme" was a motley if pretty miscellany, where understanding and imagination, art and kitsch, the genuine and the pretended were often uneasy bedfellows; out of this emerged, in its own radical and independent potency, the art of the Viennese Secession, or of a Gustav Klimt, and went on to attain an overriding significance; all this came from the same soil and humus, the intensive cultivation of the fashion for things Japanese.

posted by lotusgreen at 7:36 AM 7 comments