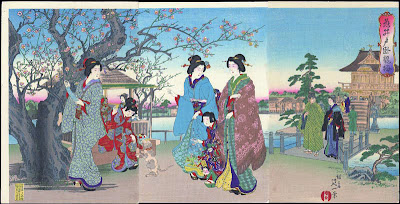 The Kimono was developed in Japan starting in the early 10th Century, when the Ancient Chinese styles were supplanted by the now common kimono style. This was derived from native work garments which better suited the climate, lifestyles and aesthetics of the Japanese, This was the late Heian or Fugiwara, period (897-1185). The earliest form of the kimono is the Kosode (small sleeve garment). Originally, it was a generally worn, plain undergarment. The farmers, crafters & merchant class continued to wear their simple two-piece garments: the Happi, a knee length top tied at the waist and loose trousers just below the knee. This was common to both sexes. Women could also wear a mid-calf, wrap-around, pleated skirt, the Mo. 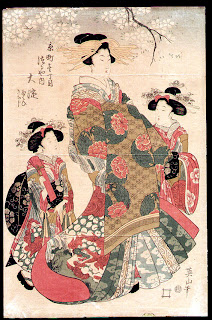 In cold weather, the longer kosode would be worn. They were often padded and/or quilted for extra warmth. Through changes in decoration and sleeves, the kosode became an outer garment of the samurai class. (1200's forward)

During the Heian period, the men of the nobility and imperial household retained some of the ceremonial styles of China, wearing the kosode as an undergarment- Kariginu. The women embraced the kimono of the large, open sleeves, the Osede. This was the era of the 12-layer kimono, (Juni-hito) worn at court. They were unlined, with wide sleeves. Care was taken that the layers blended, matched & contrasted in an aesthetically pleasing manner. The layers were visible at the neck, sleeves and the lower skirts. Up to 20 layers could be worn. Underneath it all was a kosode and Hakama, long pleated pants. The layers were tied with sashes. 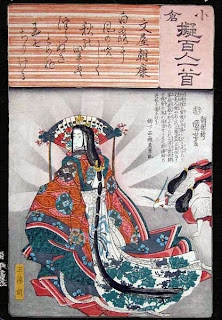 The transition from the Heian period to the Kamakura period (1185- 1333), was the change from imperial control to the shogunate and samurai. This changed the style of clothing to a simpler, more practical form, befitting the warrior class. The classic crossover front of the kimono replaced the high-collared tabard of the Heian. The men's Hitatare retained the large open sleeves that could be closed with drawstrings, but were now attached all around, instead of only under the arms. Hakama completed the outfit. A similar style for under armor and certain ceremonial activities had smaller, narrower sleeves and short trousers, or hakama wore with leggings.(Yoroi hitatare)

The lady's garments became very simple. The basic kosode sleeve had a small opening and less fabric hanging down. This was worn with hakama, the hem varying from just to the floor to dragging, depending on the occasion. 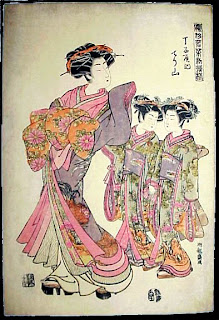 1338-1568 was the Muromachi period. This is when the tea ceremony and Noh drama were developed, along with other flowerings of artist expression. The samurai austere warrior's code had them distance themselves from the clothing of the court by wearing subdued fabrics. The men's robes were very similar to the hitatare, but were made of linen, not silk, with cords of leather, not braided silk. This was the Daimon. This garment often had the family crest (kamon) in 5 places on the kimono- 2 at the shoulders in front, 2 on the sleeves and 1 at the neck, in the back. There was no other decoration, only the fine woven patterns of the fabric.

The lady's kosode was the standard for all women, but for formal activities, an over kimono (Uchikake) was worn with the kosode under the hakama. The uchikake had longer sleeves with a small sleeve opening. In summer, the uchikake was allowed to drape over the ties of the hakama and trail behind. This could also be worn with extra-long hakama (Koshi-maki style).

During the Momoyama period (1573- 1603), warriors and land owners assumed positions of authority. This caused a change of attitude toward fashion. What ever was new and novel was highly valued. The women of the daimyo families wore richer and more elaborately decorated kimono. The ceremonial kosode and uchikaki, with a sash obi, became the standard.

After 1603, the Tokugawa shogunate was in control. The capital was at Edo, now called Tokyo. The island was closed to outsiders, except for a few Dutch and Chinese merchants at the port of Nagasaki. In men's fashion, they added the wing-shaped Kamishimo to the kimono and hakama for ceremonial attire. A formal occasion would require long, dragging hakama.

The women's styles also continued to evolve as the sleeves became much longer. Fashion was influenced by the Kabuki actors and courtesans. A style of obi was a long, braided silk cord with tasseled ends. This was wrapped around the waist and tied in back, so as to not detract from the elaborate, colorful kimono. 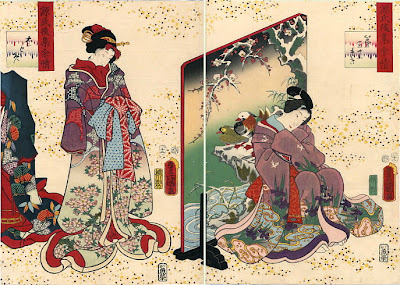 Later in the Edo period (1680- 1700's), the sleeves were at their longest- the Furisode style. The long sleeves were often used for flirting, so this style was worn by unmarried women and of course, courtesans and geisha. With the furisode was worn a much wider, stiff obi, tied in an elaborate bow in the back. This was the Darari-musubi. The samurai ladies would also still wear the plainer styles encouraged by the samurai code.

The obi itself became a design element, wider and heavier than before. During the middle of the Edo period, the obi developed its' now traditional size of 3.6m in length by 26.8cm. width. During this time, obi were often tied in front or back, with different tying styles coming from Kabuki actors. Men's obi were in two styles-- Kaku obi, which is stiff and the Heko obi, which is soft. 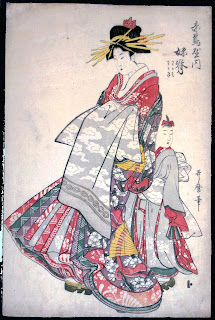 The Yukata is an unlined cotton kimono originally worn after bathing. It became a garment for casual home wear, especially during the humid summer months. The colors are usually a dark blue and white pattern. A simple sash obi is wore with this style. Another summer kimono is the Jofu, made of lightweight linen. This is worn with a light cotton kosode and an open-weave silk obi. 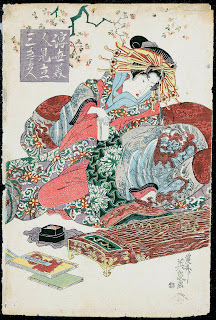 Japanese kimono fabrics are about 13"-15" wide, some can be 28" wide. Standard fabric of 44" can be used, but the pattern layout has to be adjusted. A kimono is traditional hand- sewn to make it easier to clean. A simple set of running stitches is all that's needed.

By Mistress Ella Gajewi von Pommern, O.P. Aka Louise Sugiyama May 2007, AS XLII 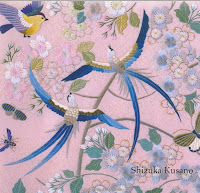 a bit more into the silent communications of the kimono. since some of this language, like ancient languages the world over, has been lost, perhaps we should make up the symbology anew.

...Japanese attention to nature arose from ancient Shinto teachings of sacred spirit temporarily inhabiting trees, rocks, and waterfalls. This concern was reinforced by Buddhism’s respect for all life, when it was imported from China and Korea in the 6th century.

[Japanese] prints are rife with symbolism, often drawn from Chinese art: cranes equal long life; pines equal winter, longevity, and endurance; cherry blossoms equal spring and transience. Many of the images draw their subjects from poems, with bits of the texts incorporated into the design. Some ... pictures are elaborate puns, as in a 1760s print in which butterflies flutter over a cat curled up on grass. In Chinese, the word for cat sounds like the word for age 80 to 90 and the word for butterfly sounds like the word for age 70 to 80. The sounds aren’t the same in Japanese, but the meaning — wishes for long life — carried over. 1

One cannot ask loneliness,
How or where it starts.
On the cypress-mountain Autumn evening
Jakuren, 13th Cent. 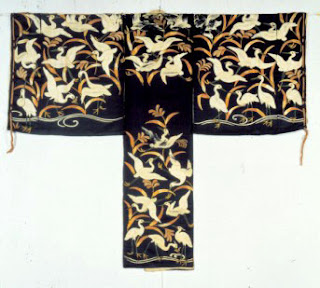 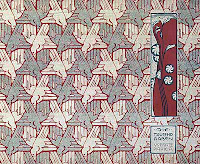 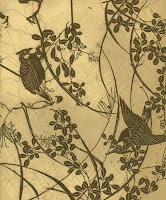 posted by lotusgreen at 8:52 AM 7 comments

Bertha Lum studied at the Art Institute of Chicago with Frank Holme who experimented with color woodblock techniques. She was exposed to the great collections of Morse, Buckingham and the Japanese influences of Frank Lloyd Wright. She married attorney, Burt F. Lum in Minneapolis in 1903, and they honeymooned in Japan. In 1907 she again traveled to Japan where she studied with master carver Iagmi Bonkotsu and printer Nishimura Kamakichi. She settled in Tokyo in 1911.

Lum preferred Japanese subjects, influenced by the prints of Hiroshige and the nostalgic and lyrical themes of Lafcadio Hearn. She remained in Japan until 1912, studying all aspects of woodblock printmaking. She returned to Minneapolis in 1912, where she continued to produce prints. In 1915 and 1919 she made extended trips to Japan, and in 1922 she made her first trip to Peking and, with the exception of the war years, spent most of her remaining years there. 1

a truly ambitious site on lum has been developed and it's now in four languages. the attempt is to catalogue and feature lum's complete works.

one of the most interesting things i learned today about lum is that it was her who did the little hiroshige-like spot drawings in bing's 'artistic japan,' as well as some illustrations for lafcadio hearn.

i have never loved lum's work. can i say why? i can make guesses but none are for sure. in general, as crazy as i am for the many western artist who incorporated japanese principles and techniques into their work, i am not fond of about half of those few who did so, and used japanese subjects as well.

still, her story is an inspirational, fascinating one, and i'm thrilled that more and more of her works are finally being made available.

posted by lotusgreen at 5:14 PM 1 comments 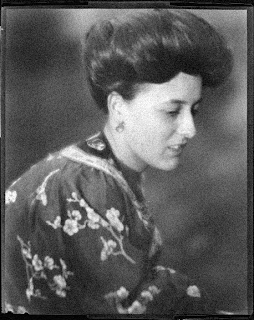 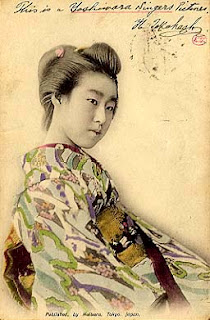 sunday
is
the
one-year
anniversary
for
this
blog! 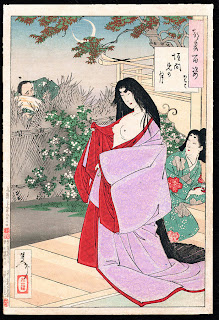 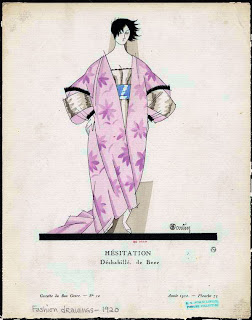 i
honestly
can
barely
believe
it. 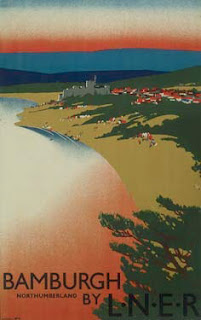 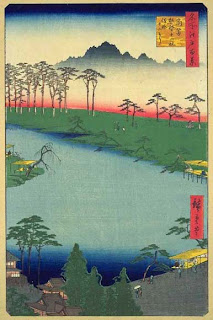 please let me
know what you
would like to see,

or would like
me to do for
the anniversary
(if anything!). 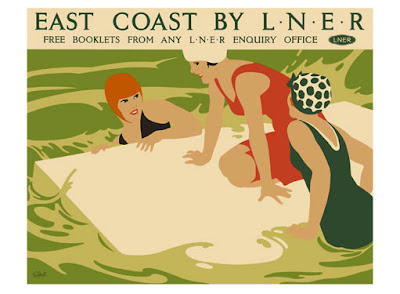 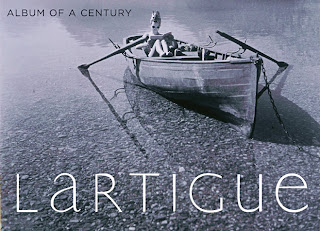 When a prosperous Maryland physician, Dr. Alexander Hamilton, set out in 1744 on a horse- back journey "intended only for health and

recre-
ation," he was doing some- thing highly unusual in the America of that day: travelling for pleasure. Within a couple of decades, a handful of other colonial gentry were seeking relaxation and fresh air at such seacoast spots as Newport, R.I., and mineral springs at such primitive retreats as Berkeley Springs in Virginia and Bristol near Philadelphia. They were among America's first vacationers, although few would use that word to describe them until the mid-19th century. 1 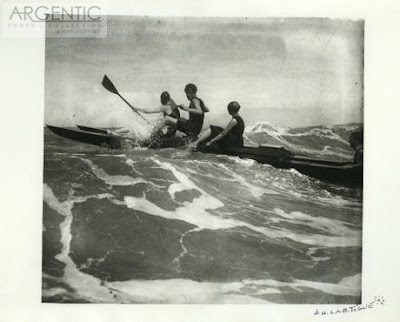 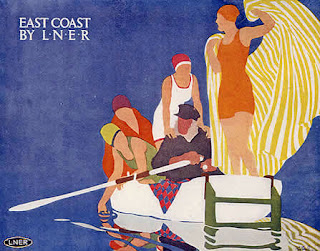 and in japan even later 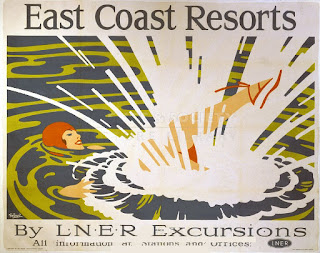 the concept of beach vacations and summer homes was first introduced to japan by the western residents of the international settlements. formerly, swimming was a military practice in a particular style, and bathing in the sea was carried out as a purification ceremony, with specified days of the month throughout the year for entering the water. 2

while public bathing has existed in parts of the east and parts of the west since ancient times, a middle class was needed before vacations could be invented. i find it interesting that in purvis's prints we can see that the outlines from the japanese prints have been dropped, leaving the flat planes of color to stand on their own.