what the poppy became to the art nouveau movement,

the sunflower and lily became to the aesthetic movement. and the artist most associated with the flowers was oscar wilde. below he is pictured in one of many cartoons of him from the magazine punch, and as both sides of a teapot as well. (perhaps this illuminates the previous cartoon a bit more fully.)

however, that is where any clarity ends. it gets so wonderfully complicated, lawsuits, people going mad, others being shipped off to america to promote work that is critical of themselves...! 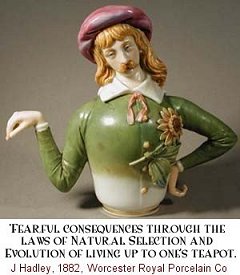 numerous people: wilde, as well as ruskin, whistler (and more to come about them), and many more both considered themselves as 'aesthetes,' standing by the movement's creed of 'art for art's sake,' while at the same exact time savaging other 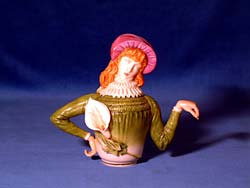 artists for saying that they were doing exactly the same thing.

i'll get this sorted out at some point and do my best to lay it out here, but now i just read,
shake my head, and decide perhaps i need a nap.

a wonderful book for all of this is 'the aesthetic movement' by lionel lambourne, whose most recent book is on japonisme.

and a very interesting website on design which includes and encompasses this era is katsclass.

posted by lotusgreen at 5:42 PM 0 comments

"let us live up to our teapot"

another name for the japonisme movement, along with art nouveau, liberty style, the arts and crafts movement, jugentstil, etc., is the aesthetic movement. while each of these have some elements that can never be confused with one of the others, they all overlap quite a great deal as to who claims what art occurred during their popularity. 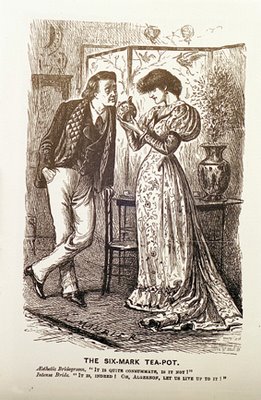 but no appellation received more parody, derision, scorn and satire than the aesthetic one. i've already mentioned gilbert and sullivan's "punch version of japonism" -- 'the mikado,' but their 'patience' is a musical poke in the eye of aestheticism.

(aesthetic bridegroom: "it is quite consum- mate, is it not?"
intense bride: "it is, indeed! oh, algernon, let us live up to it!")

while many of it's critics: oscar wilde, george bernard shaw, wb yeats, and others, stood staunchly in favor of the aesthetics' creed, "art for arts sake," they lambasted the masses for being too superficial about it!

posted by lotusgreen at 1:03 PM 8 comments 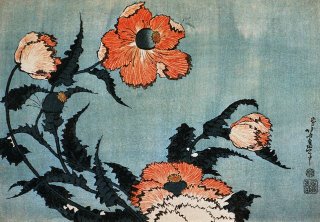 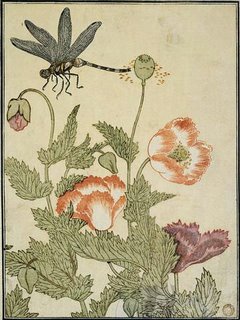 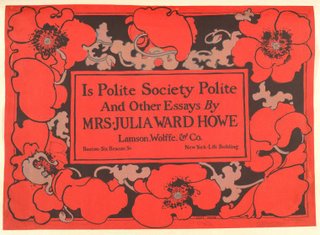 the humble poppy -- from formal, occasional

inclusions in paintings of full vases, to becoming fairly emblematic of the entire art nouveau movement.

the exuberant prints by utamaro and others arriving from japan were so inspirational that this simple flower became the adornment of the age, on posters, in women's hair (see mucha), as wallpaper, 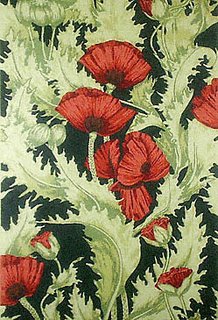 the more i read about this era, the more i realize that because what the westerners were seeing of the japanese, 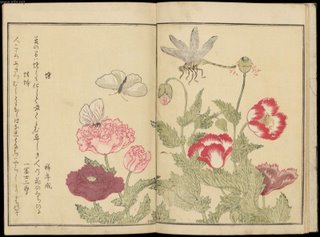 goods and information no context, no genuine way to understand, but rather images only; a grand mystification of context was laid upon them. perhaps the joyful way this flower looked when portrayed from a stance of nature's presence rather than nature's dominance was seized upon and set up to be something that the japanese artists
had never imagined. 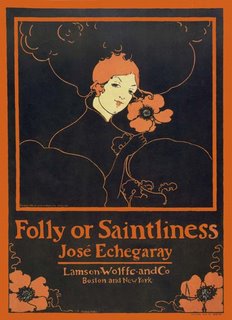 still, because i love the look of these prints i work with many of my photos to make them look something like woodblock prints. the patch of red poppies in the grasses i took in front of the house next door to the health food store in my 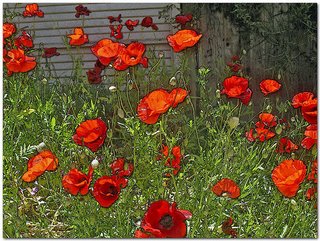 
i call these photos "woodblock photos."

posted by lotusgreen at 9:08 AM 7 comments

the bluebird of happiness 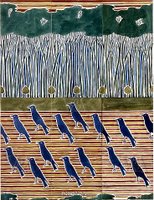 and fabric patterns, many of which featured simply drawn plants and animals -- most 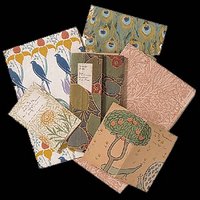 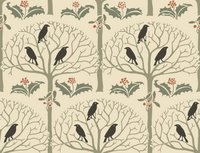 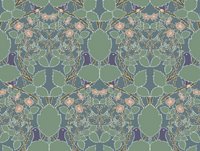 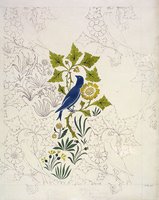 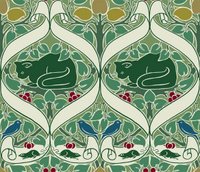 so imagine my surprise when i learned that this one is not by voysey at all but by sugiura hisui, an artist from japan working right around the same time period.

i swear i have seen a voysey even closer to this than the ones i have pictured; i'll let you know if i find it!

but what sweet poetic justice: after being influenced 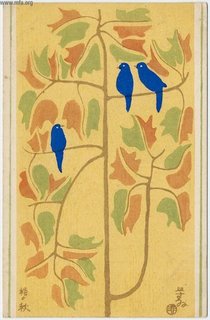 and inspired by the japanese arts (one of his wallpaper designs was called 'tokio,' he was able to return the favor.

posted by lotusgreen at 5:02 PM 0 comments

mother, you are so last year 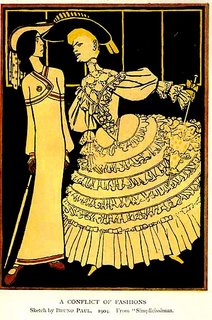 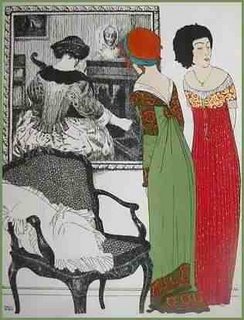 as with all dramatic social changes, there was no shortage of conflict.

ironically, some credit for the relaxing of the stylish shape was credited to the kimono, whereas in truth the kimono was not relaxed, and not without its own rigid cultural restrictions. 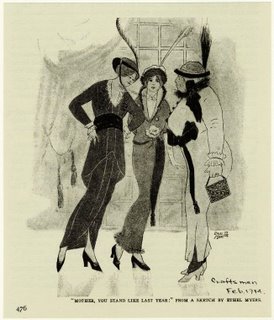 posted by lotusgreen at 8:34 AM 0 comments 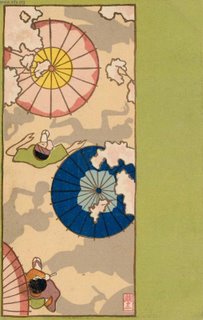 takehisa yumeji was a restless, flamboyant, and hopelessly romantic artist and poet. married three times, twice to the same woman, his search for a romantic ideal took him around the world, studying, observing, and probably falling in love all over again.

what his wanderings led to was this: he essentially revolutionized japanese art, bringing it into the 20th century.

shin hanga already existed: a transitional era with one foot still in the style of printing that hiroshige, hokusai, and utamaro did, and one foot in styles of the west. takehisa yumeji is credited for having initiated sosaku hanga, which combines traditional japanese iconology with some first steps towards integrating the modern art movements happening in the rest of the world.

be sure to note the shadows below the umbrellas; i like the guy in the cap drinking from a bottle! i don't have a specific date on this but it is from the taisho era (1912-1926). 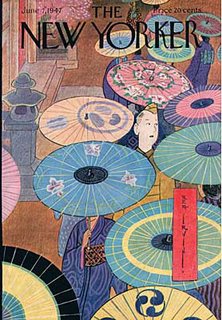 rea irvin created the cover for the new yorker. many of his designs feature asian elments. this one is from 1947. 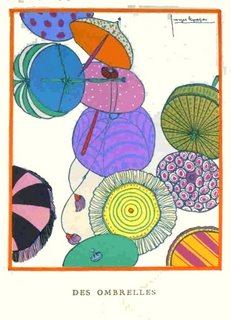 in 1912 george lepape did the illustration for a periodical called 'gazette du bon temps.' it is only one of many of his wonderful illustrations. like yumeji, he frequently chose beautiful women for his subjects. yumeji was called the utamaro of the taisho era.

do i think these were mimics? probably not, at least not specifically. but as another blogger just wrote me and said, 'japan is just a state of mind.' at that moment in history, it was. and that was it's best, and its worst, quality.

posted by lotusgreen at 1:29 PM 0 comments

the times, they were a-changin' 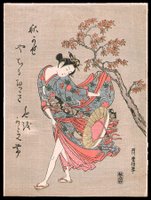 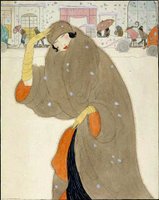 yes, i know what you're thinking.... couldn't all of these corres- pondences just be coinci- dences? i mean--hey! there's wind every- where, isn't there???
well sure there is, and you might be right, but the thing is, even if the image is not borrowing from the image, and i believe they very well might be, the transformation has already taken place, and to realize that, you have to remember what came before.

think what fashion illustration, woodcuts, portrayals of human bodies, the drape of fabric, the formality of setting and pose, was like before the west saw artwork from japan. 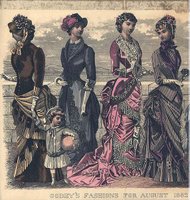 posted by lotusgreen at 8:19 PM 0 comments 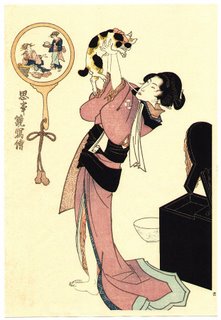 a perfect match
for the crazy cat...
peony

the influence of sight 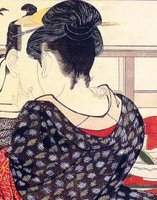 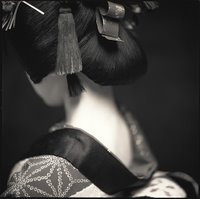