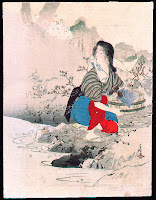 i have been thinking about something for a while now; i'll share it with you, but also, i'm curious to hear any thoughts you might have. 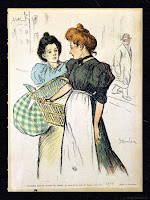 as i've mentioned, one of the things that exposure to japanese work afforded western artists was the 'permission' to paint subjects not considered right for art before this. 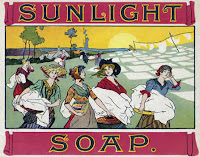 we've already seen some of the lovely and profound effects utamaro's prints of mothers and infants had on mary cassatt and many others.

two other professions now open for interpretation were theater people and courtesans. one only need think of toulouse-lautrec to remember both.

but another job pictured with interesting frequency are the washerwomen of the world, the laundresses, les laveuses.

i begin to ask myself about all of this.

is it a matter of class, primarily, the distance of the lower class makes them safer to interpret?

not that many of the painters were of many higher of a class, but they had a certain status, particularly among themselves.

perhaps it's a matter of decorative appeal. there is something quite lovely of a white-bonnetted or apronned woman hanging the white wash on the hillside. 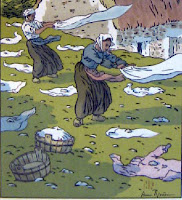 more scenic surely than a woman at a typewriter.

not to say that the upper-class was not painted, but what percentage of that was portraiture, bought and paid for? 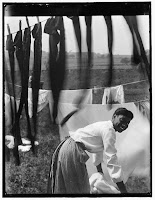 so i love to look at these too, as well as the dancers and actresses and whores. 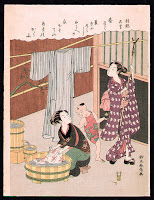 but is it, i ask myself, because i too easily see women in subservient positions; it's natural, known. 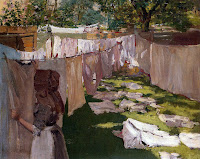 after all, isn't this what we're best at?

posted by lotusgreen at 1:00 PM 2 comments 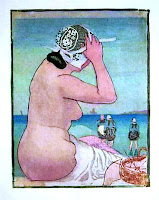 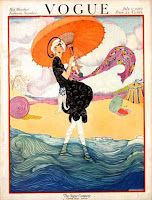 posted by lotusgreen at 6:24 PM 0 comments

SILVER dust
lifted from the earth,
higher than my arms reach,
you have mounted. 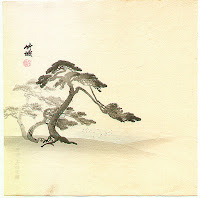 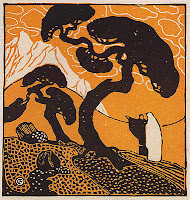 higher than my arms reach
you front us with great mass;

O white pear,
your flower-tufts,
thick on
the branch,
bring summer
and ripe fruits
in their
purple hearts.

posted by lotusgreen at 8:37 AM 5 comments 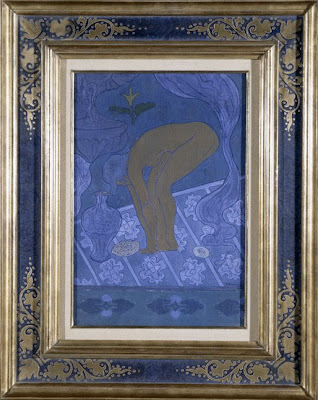 Paul Ranson, one of the Nabis, developed an original style with Symbolist and esoteric resonances. In 1891, he made two versions of Lustral, including this one, which belonged to his friend Maurice Denis.

Apart from its enigmatic title, the work can be classed as a genre scene. It can be seen as a female nude at her toilette. A sponge and bar of soap are laid on a mat at her feet alongside an ornate pottery pitcher. Ranson has multiplied details that give the scene a more symbolic meaning; the fabric which unfurls above the bather like a snake, the swan-necked fountain with its shell-shaped basin or the flower blooming on the wall invite a more erotic reading. The ablutions of the young women are a purification rite, as the title suggests. Apart from its esoteric connotations, the term "lustral" refers to medieval mysticism: lustral water is supposed to purify souls and drive out demons. It is still used for baptisms.

Ranson invites us to attend this intimate purification, almost by breaking and entering. The colour range is reduced to a palette of greens and blues conjuring up the night. The young woman's orange-brown body emerges sharply against this dark background. Keenly interested in decorative art, Ranson has surrounded his figure with arabesques and floral motifs. The deliberate flattening of form and the simplified treatment of the colour explain the nickname Ranson was given: "The Nabi who is more Japanese than the Japanese Nabi," an allusion to Bonnard. 1

(there is a very weird blogger thing wherein if you post an image either centered or 'not placed' it will not allow type to flow normally around it. i had had two images posted like that in the 'ducks post,' so i ended up changing them both. what i didn't know, until harlequinpan's question on that post, was that in doing so i would be making changes i didn't expect. knowing he wouldn't have asked unless he didn't have access to the information on the post, i checked it out. sure enough, all the images but the ones i had re-posted were no longer live. ie. you couldn't click them to see them larger, nor find out any information attached to them. fixed.)

william merritt chase was one of the most prolific of the western artists in presenting the 'stuff' of japan. 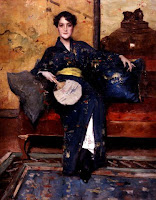 his landscapes often exhibited structures and layouts inspired by japanese work, but his portraits, with some notable exceptions did not. 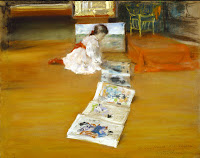 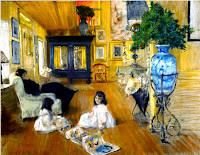 In an earl[y] pastel, Shinnecock Studio Interior, ... in the Terra Foundation’s collection, Chase ... experimented with the motif of a child on the floor examining a book of Japanese prints arranged to lead the eye into the composition. 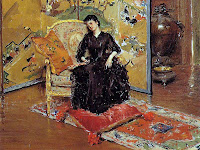 This book and the large Oriental vase on a stand anchoring the view on the right announce Chase’s sympathy with Japonisme, the European and American passion for all things Japanese that rapidly followed the opening of trade between Japan and the West in the 1850s. The tipped-up perspective and casual asymmetry of the composition indicate that Chase had absorbed more than a collector’s interest in Japanese aesthetics. 1 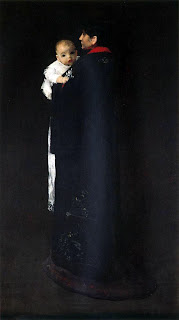 however, this is no exploitative fancy at japan's expense, but rather a love affair, like his friend whistler's, with forms, shapes, fabrics, patterns and designs that were new to him, and were inescapably lovely. and how better to celebrate that but to wrap in the beautiful goods and surround his most beloved people.

posted by lotusgreen at 8:53 PM 1 comments 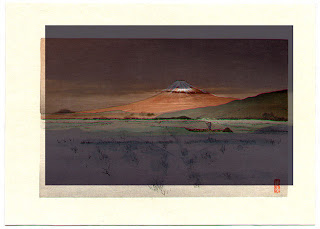 i began to experiment with overlaying my own mountain, water, cloud photographs, with some from the japanese masters. here are some results. 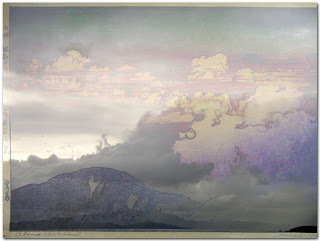 if you click on the images to see them larger, you'll see who i'm combined with. 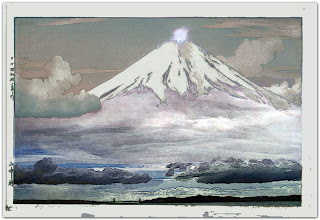 i have been doing what i call 'woodblock fotos' for a while now;

sometimes the images are combined with those, sometimes with straight photographs. 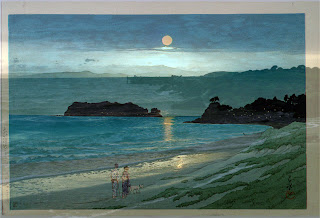 one has actually seemed to have disappeared from my hard drive! so i'm hunting it....

posted by lotusgreen at 6:55 PM 8 comments