what i found myself wondering about were the qualities of directness and indirectness in the two cultures -- could they have an effect on the art? 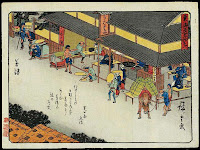 here's something i found that i thought was very interesting:

Some cul- tures, such as in the Australia, US, Germany and Britain, generally value a direct style of communication. They like to “get down to business,” “cut to the chase,” and “get to the point”. They do not feel offended or shamed by the kind of direct statements that might be considered offensive in indirect cultures such as in Asia.

In fact, when things are not stated directly, people from direct cultures (such as Australian co-workers) can become confused and frustrated, and might not understand the message at all. They are used to communicating with people whose maxims are “say what you mean, and mean what you say” and “let your ‘yes’ be ‘yes’ and your ‘no’ be ‘no.’” In these cultures, being direct is how people show respect. 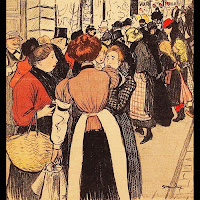 In cultures that use an indirect communication style, such as India, China, Japan, and other Asian cultures, it is very common to encounter situations where people communicate in a way that would not cause someone to lose face. Thus, communication happens indirectly.

Messages are subtly implied rather than explicitly stated, and people are accustomed to reading between the lines for the message. Words such as “perhaps” and “maybe” are often code for “no,” since saying “no” could risk shaming someone. In these cul- tures, being indirect is how people show respect.

this is all in the context of training people in different parts of the world, who must interact every day, how to do it.

Akio Morita (co-founder of SONY) once said that when Westerners “ask questions or express an opinion, they want to know right away whether the other party agrees or opposes them. So in English, ‘yes’ or ‘no’ comes first.

We Japanese prefer to save the ‘yes’ or ‘no’ for last. Particularly when the answer is ‘no,’ we put off saying that as long as possible, and they find that exasperating.”

Each of us intrinsically feels that our style is the “right” style, and the other is the “wrong” style – but in the end, it’s not a matter of right or wrong, but of getting on the same wavelength. ☆

so what do you think? might these very different communication styles be part of why, in so much of japanese art, things, people, landscapes, veer, gracefully sidestep, rather than approaching the viewer 'head on.' 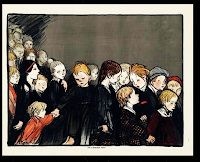 can this also explain the works' simplicity or asymmetrical nature? and does it even explain these glorious diagonals or is the argument 'far fetched'? since you and i are likely to never come 'face-to-face,' we are not likely to see 'eye-to-eye.' nor shall we 'butt heads.'

i can face that.

posted by lotusgreen at 3:07 PM 6 comments

as a quiet, ubiquitous symbol, the bamboo has featured in japonisme wherever it occurred. whether it's pictured, or used, or imitated (silver bamboo handles, for example), it has become an instant communication of the east. 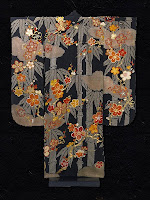 it's interesting, however, to look into its usage in japan itself. where it's found, or wherever i was able to find it anyway, wasn't necessarily where i had expected. 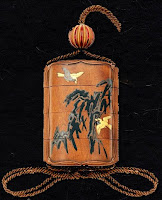 yes, it can be found on kimono textiles, and on crafts, like the inro. 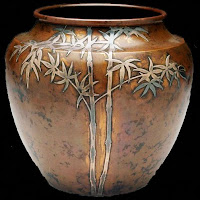 in the west there were few instances of crafts where it wasn't used. it's irresistible because it's so graceful, so simple, so emblematic of all that we had accepted the east to be.

in japanese prints, however, there seem to be unexplained limits to it's usage: we will see it, again, as a pattern on kimono.

and, as we've seen before, one might find bamboo in a book of style suggestions.

we will also see it as part of a kabuki backdrop, and it's always used to geographically
place tigers. 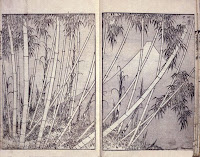 but, it seems, and as far as i could find, picturing bamboo groves or forests almost never existed until late in the 19th century. this one hokusai image is the only one i could find. compare their frequency to that of pines.

the yoshida's, father and son, loved them, as did many other artists on into the twentieth century. i can not only find no reason for this, but not even any mention of it.

now this is not to suggest that the bamboo is not beloved in japan. in fact, The sound of the wind in this bamboo forest has been voted as one of 'one hundred must-be-preserved sounds of Japan' by the Japanese government. 1
but although hiroshige did use bamboo's wonderful verticality to accompany the flight of a bird (a sparrow), as did others, the forests and groves were rarely seen. 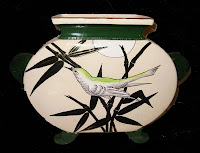 as 'meaningless,' and quite lovely decoration, though, it could be found in droves throughout europe and the americas. 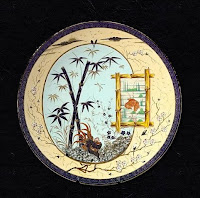 may we be reassured that these appearances reflected our passion for the illusions we'd formed of japan? 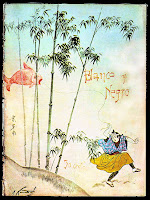 and if so, were these illusions perpetrated by the japanese themselves, or by us?

and, at last, does it matter at all? fashion is as fluid as the wind; listen, you can hear it now. it's a sound which must be protected.

translation is an odd art. what appears to be literal can really only be approx- imate, romanticized, inspirational.

which is quite acceptable.