mucha was an unknown. yes, he was making his living by his art, an obscure illustrator, and this was his dream -- well, not the obscure part. one night when he was working late into the night, sarah bernhardt phoned the printer in a fit of pique! this new poster!!, she cried. it will not do! (of course she probably cried this in french)
although it may sound like a scene out of a busby berkeley movie, the only artist they could find that snowey night was this little man, awork at his station. and he vowed he would give it a try.

the rest, as they enjoy repeating, is l'histoire. she loved the poster so much that she signed mucha to be her exclusive poster-maker, and more, her costume and jewelry designer, stage sets, headdress and more. his work was so original! like nothing seen before--not even in mucha's own work!

and it suddenly became the design rage throughout paris: the scroll-like shape, the simplified grace of one woman, adorned, and set off by her glorious fabric. mucha was an overnight success, posters were seen for the first time as fine art, and the definition of art nouveau had now been solidified.

but... uh... wait.... you know what i'm going to say, don't you? gee, wonder where mucha found the inner vision to create something so "revolutionary"? come on now--give it a guess.

the solitary peaceful woman, the flowery hairpiece, the fabric and background as focus, the lack of perspective, even the shape of the dress, the clothing--what mucha did for a decade is to put a slavic/parisian spin on an ancient design scheme and claim it as his own.

and rarely if ever do i see anyone suggest otherwise, though to me it couldn't be more obvious.

(mucha's gismonda poster, his first of this style, is from 1894. the image just below the artist's photo is from about 50 years before that, i believe. forgot to get a credit for that one. below that, kunisada, 1858, in purple. notice her hair ornaments. in pink to the right are courtesans--with the elaborate wooden stick hair ornaments--and maiko, apprentice geisha, with the garland of flowers. sarah's headdress is much more a maiko hairdo than a geisha; yes it is inventive, but not invented. this one is by utamaro kitagawa and dates to the 1700s. and then two from kunichika toyohara from 1890. women of presence clearly did exist in print before mucha reawoke them in a new vernacular.)

please don't get me wrong--i adore mucha's work. i seem to never tire of it. i remember the thrill of seeing the original of one of his posters, a sketch, i guess, at the zimmerli at rutgers, that thin, human pencil line. so simple. it's just that, well, credit where credit's due, don't you think? what do you think? 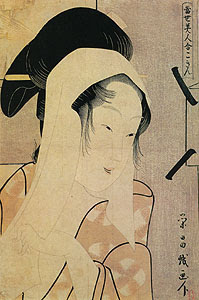 "One day in 1871, legend has it, a French artist named Claude Monet walked into a food shop in Amsterdam, where he had gone to escape the Prussian siege of Paris. There he spotted some Japanese prints being used as wrapping paper. He was so taken by the engravings that he bought one on the spot. The purchase changed his life — and the history of Western art."1

posted by lotusgreen at 9:45 PM 0 comments

the bleed of culture, the stain. the blossom

Hannah Borger Overbeck was one of the four Overbeck sisters who founded the Overbeck Pottery studio in Cambridge City, Indiana in 1911. She is credited as being the chief designer for several decades until her death in 1931, an influence that led to large decorated pieces with highly colored patterns, uncluttered, and incised lines based on nature.1 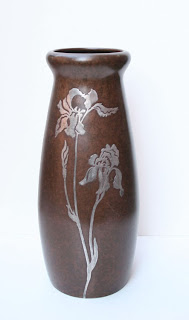 Otto Heintz was born into a family of manufacturing jewelers in Buffalo , NY . By about 1902 he had purchased a small company, renamed it the Art Crafts Shop, and began design and manufacture of copper items with colored enamel decoration. He was granted three patents. By 1906 he changed the name to Heintz Art Metal Shop, and shifted to bronze as the base material and sterling silver as ornamentation. The Art Crafts Shop hammered “look” was replaced by a series of machine-shaped bodies with sophisticated patinas. The definitive patent for applying sterling silver to bronze without solder was granted August 27, 1912 .

Heintz’ line consisted of vases and bowls, candlesticks, smoking accessories, trophies, lamps, desk accessories, picture frames, bookends and jewelry. From a circa 1916 trade catalog: “Heintz wares have won an enviable reputation among buyers of art goods, because of originality and beauty of design, and unusual quality of attractiveness. The articles are of bronze, and are decorated with sterling silver designs, permanently applied by our patented process. Beautiful colored finishes have been produced after much thought and experiment...”2
(ohara koson; hannah borger overbeck; heinz art metal; hiroshige)

posted by lotusgreen at 4:44 PM 0 comments

fear not the night, dears 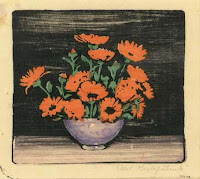 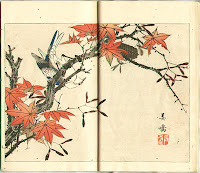 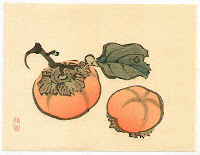 with no pattern but beauty! 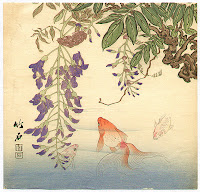 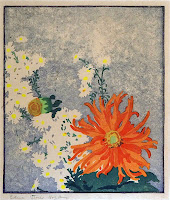 for no reason
but
joy!

posted by lotusgreen at 9:04 AM 5 comments