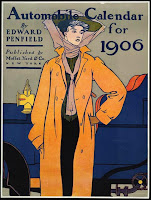 in order to understand the evolution of japonisme into what was called plakatstil in germany (and which occurred, as a look, mainly in germany, england, and the united states), we need not think image, we need to think calligraphy. 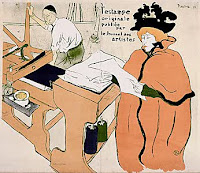 we have seen the numerous art nouveau lettering styles that so closely imitated the japanese brush-made letters. the important thing was that, in the flurry of the industrial age, this stress on hand-lettering. 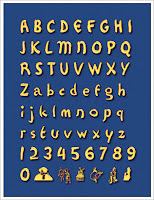 one of the first to take the hand- lettering beyond the purely japanese- brush look was toulouse- lautrec. his hand-lettering is a bit awkward at times (look at the 'd' in aristide's name) but always quite charming, and maintains the feel of the japanese calligraphy. there is just nothing hard-edged about it. an itc font has been created to honor it, and you've been looking at it at the top of this page for a year and a half now; it's called 'le petit trottin' after a sketch lautrec made of a trottin, a shop-girl. 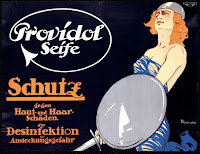 note also in the lautrec posters the blocks of color, the flat surfaces, diagonal structures, and the asymmetry in their layouts -- all things we have compared with japanese prints in the past. 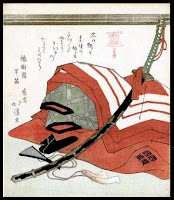 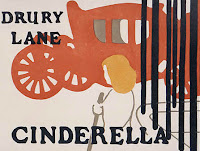 the next steps the hand- drawn characters took were to still less stylized but no less charming forms. credited as leading this movement were the beggarstaff brothers (the name william nicholson and james pryde took to do commercial work so as nobody would think they were not serious artistes). 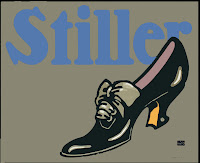 while they still borrowed many of the design elements of the japanese prints, they took the lettering to its next step.

and following closely on their tails were edward penfield in the us, and the artists of plakatstil: german advertising posters which are said to have revolutionized advertising (while still richly inspired by the japanese).

among these were lucian bernhard (the instigator), ludwig hohlstein, paul schuerich, emil paul rumpf, julius gipkens, and many more. note additionally, of course, the use of outline, blocks of color, simplicity and solitary focus, and the diagonal lines of their inspiration.

otto heim codified the wonderful fonts, and in our own time, nick curtis has reinvigorated them. to me, they are the most charming fonts available.

why did the rest of europe never adopt this lettering? i'll let you know when i find out.

posted by lotusgreen at 4:38 PM 9 comments

Did your lady friend,
Leave the nest again?
That is very sad,
Makes me feel so bad,
You can fly away, 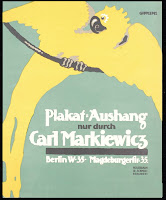 In the sky away,
You're more lucky than me.

I also had a pretty girl,
She's not with me today,
The're all the same, the pretty girls,
Take tenderness,
then they fly away. 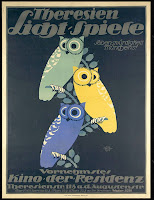 Up high in banana tree,

Let her fly away,
In the sky away,
Picker coming soon,
Pick from night to noon,
Black and Yellow you,
Like banana too,
They might pick you someday. 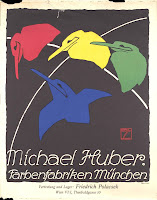 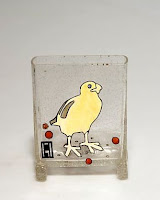 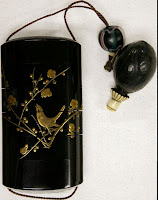