THE MUSIC IN MY FATHER'S HOUSE
John 14:2
Only a music of its own could come
from this dwelling place, formed
as the composition must be by the hallways
of larch and the black columns of lodgepole
pine lending as multiple corridors in all
directions through overlapping shadows
and into the chambers of others.

Entering this open sunroom with walls
of glass, three deer splash through the marshy
grasses, pause as one to look back
at the composers. those scribes who listen
to the measures of their passing.

Themes of osprey, loon, raven in flight,
a skein of ducks reflect off the mirrored
ceilings that ring with depth like bottomless
lakes, like the tolling bells steel-blue skies. 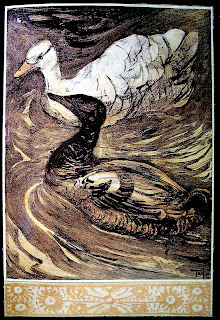 The stitching of the tapestries hanging
the wall: of the highest room is so exact
that the distant valleys in the scene depicted
become sensuous valleys. The threaded notes
of the rivers are heard as rivers, and the finely
sewn mountains are mountains that disappear
into the distance as departure and return,
a repeating transition in the score.

In the expanse of forests and fields
comprising this structure, what is not seen
is known by the steady beat and undertow
of its presence -- black bear, lion, root, glacier path
and its incantation, the dormant, the conceivable.

Those who are sequestered here
in this house write the music of themselves
conforming to the stone, the seed, the spacious
generation of these living mansions.

1909 is unique among the years in hoytema's calendars. it's all ducks. we've seen his ducks before. heck -- i love ducks. but what were ducks to him, as a human?

can we read a real quiet between the lines?, or is that silence? thoughtfulness? reflection, yes. sometimes. and repetition, so the whole year becomes like a song, with phrases which repeat, themes that are revisited, so identity becomes confused in its interchangeability.

or is there a sadness we see? we know that hoytema's last decade was not an easy one, illness and divorce, perhaps a touch of madness.
are ducks sad? pensive?

a new friend wally, who has offered to do dutch translations at some point, fills in some details from yesterday's post (a much better translation of which is here): 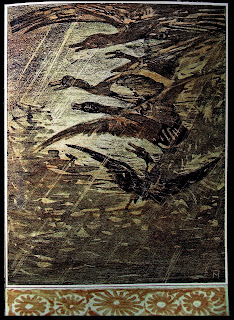 "The name of that first book Hoytema produced is How the Birds got a King. In brief the birds decided that the one who could fly the highest would be king. The golden eagle flew higher than all others but when he was at his maximum height and exhausted the wren who had been hiding on his back flew up beyond the eagles reach -- and hence was named the king. The dutch name for the wren is winterkoning, literally winter king. You can see the little bird on the back of the eagle on the cover of the book.

Hoytema had an uncanny ability to show the character and attitudes of birds in his images. From the elegance of the vain white herons, the squinting thoughtful owls and the nonchalance of his shrugging crows. They speak through him to become timeless.

There is one other artist who does a similar job and that is Jan Mankes. He is truly unknown outside the Netherlands. Poke around the website that shows almost all his works. Check out all the birds...."

posted by lotusgreen at 4:25 PM 2 comments

what an adventure this is turning out to be!

first, from jalf flach, i received a bunch of months i (coincidentally) didn't have before and couldn't find! because they're numbered differently from the ones i had, i couldn't match up months by end/start dates, so i asked him if he knew the years for the ones he sent. he responded that for many years after hoytema's death, the calendars were continually re-printed, not always keeping the same months' images together as they had first appeared! 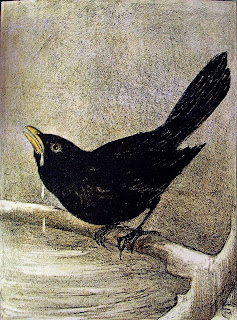 so please let me explicitly ask: if anyone out there has images from these calendars, i would love to hear from you. thanks.

coincidence as well, synchronicity. laura at her cool animalarium blog, being perhaps the only other person on the planet who owns the book that inspired me to start on this, did a post on it. 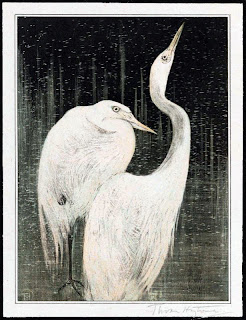 and, being italian, as is the book, was in the process of translating bits of it, which she will allow me to post here!

"The book from which these images are taken is Theodoor van Hoytema – Calendari by Ezio Godoli. it was published in 1989 by Cantini Editore, a Florentine publisher who in the 1980s–90s produced some really nice and well documented illustrated books about art, illustration, fashion and ephemera. Unfortunately, as far as I know Cantini is no longer active but some of these out of print books can be found at bargain prices in used bookstores around the city and on the web." 1 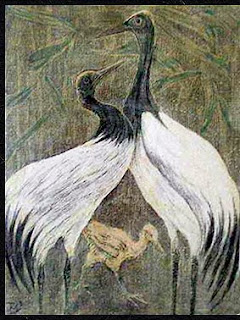 more from the book: "As an adolescent Theo van Hoytema loved animals, and was fascinated by illustrated books on entomology and natural history. Having noticed this, in 1888 his uncle A.P.M. van Oordt, a publisher and typographer, commissioned him to draw some illustrations for scientific publications on zoology. To accomplish the job, Theo went to study and sketch the animals at Leiden's Museum of Zoology and perfected his lithographic technique. This experience marked the beginning of his career as a serious artist, and in a few years' time, he became internationally known as one of the most original interpreters of the Nieuwe Kunst, the Dutch version of Art Nouveau." 1 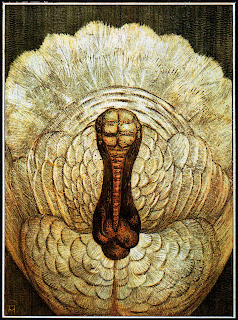 laura has also offered to do more translation, and, as she did for her post on her blog (and you'll see some here), to provide us with scans! 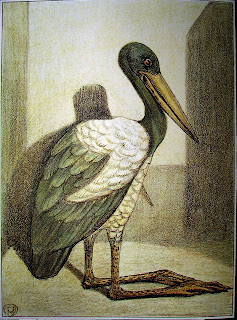 a bit on my process. these images are collected from 1001 places; some i've had for years. others i've adapted from illustrations in the book. while laura can scan them beautifully, my photos of the pages really do not turn out very well. some that i find are abbreviated, showing only the main image, thus leaving out the madly delightful critters in the frames. 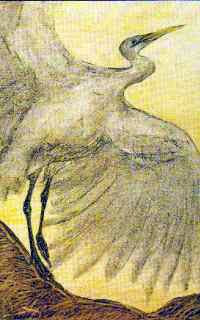 and now further truth -- sometimes i even have the images with the clever frames, but use a main image only because one i've downloaded and the other i'd have to photograph and then spend an amazing amount of time trying to make it look halfway decent. 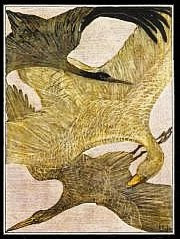 i will continue to search for better images, to work with my photos, and to welcome any scans, and will replace old images for new in an ongoing way, if i can improve on them. the calendars are still being reprinted and sold, so more images might be out there somewhere. 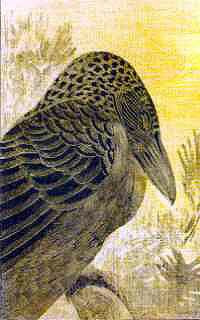 the flip side is that if the close-up images are good enough, then they're lovely to have all in themselves, and i likely will run both, when i can. 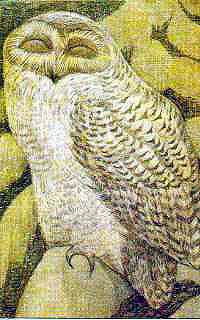 so thanks for visiting here; only 15 years remaining!

posted by lotusgreen at 2:27 PM 2 comments