flowers from our shores 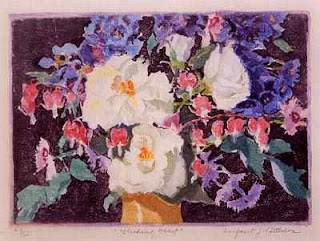 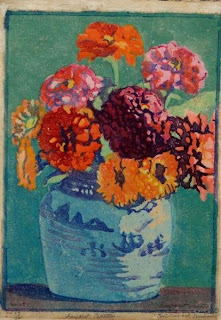 it occurred to me this evening that though many of my favorites from this era are women, i show you the work of more men than women.

well... there are a lot more to choose from, in the west, and in the east there are only men to choose from. but i want to remedy that a bit tonight. i've mentions some of these women before, but here's a little context. 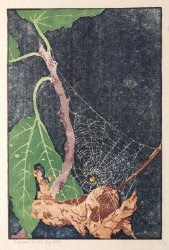 Edna Boies Hopkins studied under Dow at the Pratt Institute in 1899 and 1900, learning block printing and Dow's principles of composition. She then taught design at the Veltin School for Girls in New York City. 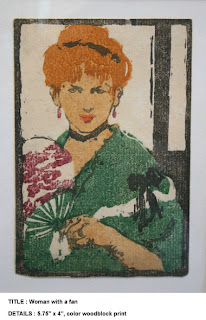 Hopkins taught the wood-block technique to Ethel Mars (1876-1956), a friend from the Art Academy of Cincinnati in Ohio, who moved to New York in 1900. 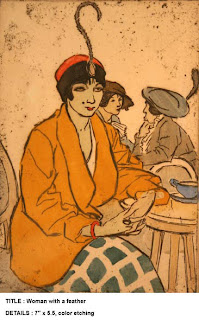 Mars in turn taught Maud Squire (1873-1955), also an art student from Cincinnati living in New York. By 1906 each of the three women had settled in Paris, and together they formed the nucleus of a group of American print makers. 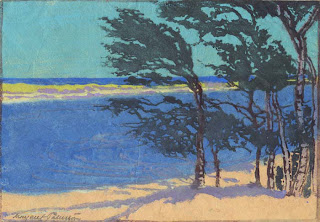 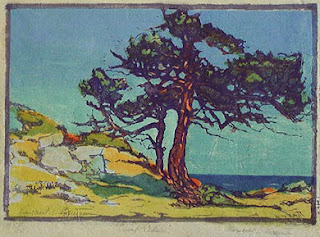 In 1910 they were joined by Margaret Jordan Patterson, who had studied at Pratt in 1895, and although she had not enrolled in Dow's classes, she credited him as her teacher.


Patterson, who was also a textile designer, learned the wood-block technique from Mars.1

posted by lotusgreen at 9:04 PM 1 comments 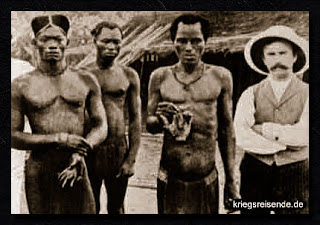 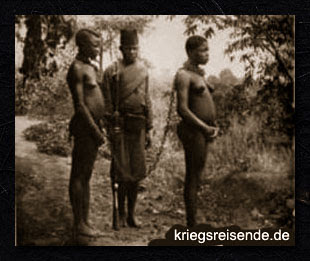 In 1885, King Leopold II declared the Congo Free State (as large as the whole of Europe) to be his personal fiefdom and set about enriching himself and Belgium in earnest. In 1887, Scottish surgeon J B Dunlop used rubber for constructing inflatable tubes for bicycles and the demand for rubber grew sharply. The motor car was also becoming popular and Leopold sought to provide the rubber for the tyres. Leopold issued a decree in 1891 giving himself the monopoly on the trade in rubber and ivory. The same decree obliged natives to supply these products without payment. Those who refused or failed to supply enough had their villages burned down, their children murdered and their hands cut off, even if dead, as proof to the Belgian masters.1

posted by lotusgreen at 6:38 PM 2 comments 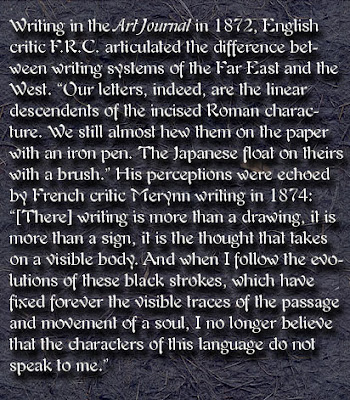 (from the catalogue for the exhibition 'seeking the floating world.')

posted by lotusgreen at 1:58 AM 2 comments 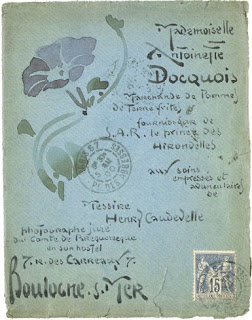 many people know the name auriol from the font, a font that perhaps typifies art nouveau in the minds of many, that even more typifies japonisme, in it's clear debt to brush calligraphy. but behind the font is the man, the designer of the font, and of much of the japonisme legacy with us today.

when auriol arrived in paris, he was quickly enthralled by the japanese influences everywhere, and set off to study with riviere, who had begun to teach printmaking in the japanese style. 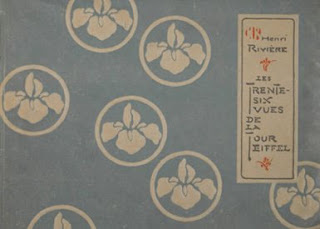 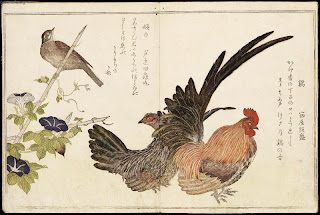 some of auriol's designs were nearly strict reproductions of japanese designs, but others flowered forth from his own creative spirit into his typography, book design, and illustration.

(bottom left from utamaro's series of birds in a song competition with each other.)

posted by lotusgreen at 1:31 PM 2 comments 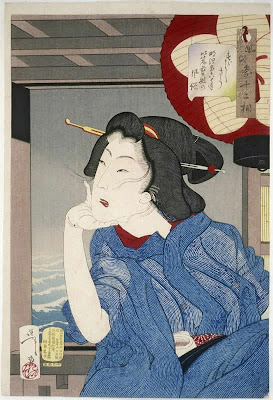 in 1989 an exhibition was in japan when i was. it was between shows at two different museums, and i didn't know about it while i was there, but other than that i would have loved to have gone. "seeking the floating world: the japanese spirit in turn-of-the-century french art." while it was shown in only japanese museums, it was assembled with help from the japonisme center at rutgers, which is where i bought the catalogue. (it is out there, i just checked.)
the selection of items is stunning, though what we are shown is primarily the french images only; the japanese 'equivalent,' when one was mentioned, is shown as a thumbnail. still, as always, fascinating.

i thought i'd go through the book over time and show you some of the similars they suggest, and others i've found.

the first japanese image i'll use is from yoshitoshi tsukioka. it's called, 'looking cool: the fashion of a geisha in the early 1870s,' from his series 'thirty two aspects of woman.' 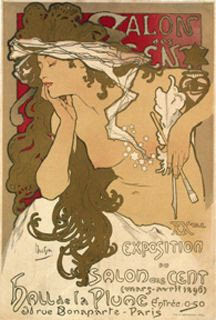 paired with that in the exhibition is this poster from mucha. the copy in the catalogue reads, 'mucha's distinctive style of flowing arabesques and a unique use of variegated linear patterns suggests inspiration from such late nineteenth-century japanese printmakers as yoshitoshi.' 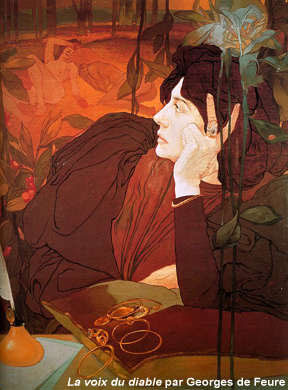 to my eye, this image by georges de feure captures a similar moment in a similar style as well. de feure, in addition to his attraction to the nature-based patterns and decorations of the japanese styles, as well as many of the kimono fashions, is known for portraying women in a way found in the work of few artists of the time.

in these, he found depth, variation, pride, thoughtfulness, and a wide range of emotions still notable for their wisdom. in this he shared something with yoshitoshi, whose series does the same from a japanese perspective. 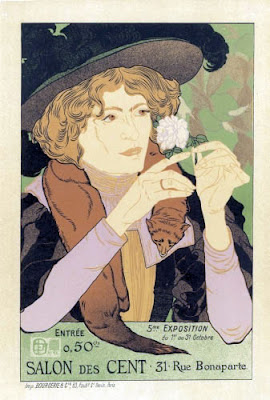 the similarity may end there, though. while de feure linked up with samuel bing, indeed so much so that much of the interior of bing's l'art nouveau shop was designed and decorated by de feure, and the store sold much of de feure's furniture. de feure then went on to design furniture for high-end clients throughout paris.

posted by lotusgreen at 9:33 PM 0 comments 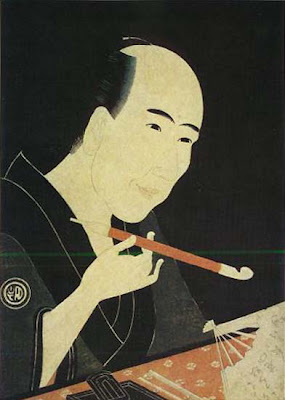 i realized that i couldn't just be done with this guy: he was too fascinating. let me show you some of the things people write about him:

Santo Kyoden, was a multitalented artist of the Edo period (1603–1867). Kyoden, whose activities crossed media boundaries, was successful as an ukiyoe painter, writer of popular novels and designer.

Kyoden was born in 1761 in Fukagawa Kibacho, Edo (Tokyo). His real name was Iwase Samuru. At the age of 15, he became an apprentice of leading ukiyoe artist Kitao Shigemasa, and renamed himself Kitao Masanobu. A precocious genius, Masanobu became one of the best three ukiyoe artists of that time in just five years.

At the time, various forms of popular literature, generically termed gesaku, or popular books, were in fashion. The gesaku genres included: sharebon, literally translated as “witty books,” which told stories about life in the red-light district; kibyoshi, or yellow backs, which were illustrated, satirical books for adults; and gokan, or books of illustrated long stories, often of a moralistic nature.

Kyoden started out illustrating for kibyoshi, however, by the time he was 20, he had begun to write stories of his own and these would become very popular. At first, writing remained a sideline, but the weight of work gradually shifted from that of illustrator to writer.

In 1785, when he was 24, Kyoden was already a successful kibyoshi writer, but upon venturing into writing sharebon, he became the leading author in that genre. When he was at the peak of his writing career, the Kansei Reforms were initiated by the Tokugawa shogunate, and kibyoshi and sharebon became subject to regulation as publications liable to corrupt public morals. Under the new laws, Kyoden was arrested and detained for 50 days by the authorities. Deciding it was not worth the bother, Kyoden quit writing sharebon and opened a store selling tobacco pouches in Ginza. His artistic genius was expressed again in the new business. To promote his products, Kyoden made advertising flyers, in which he used to wrap his tobacco pouches. The promotion was highly successful. Customers bought the products to see the flyer filled with the art and the taste of the designer. Kyoden's other area of expertise thus became well known.

There is no other artist/writer in the Edo period that was as versatile and multitalented as Kyoden. He died in 1816 at the age of 55. He is said to have been enthusiastic about creative art until his death.2

harvard professor adam l. kern's pdf introductions to his new book on the origins of manga can be found here and here; they contain fascinating and amusing insights, perspectives, into santo kyoden's career and life. 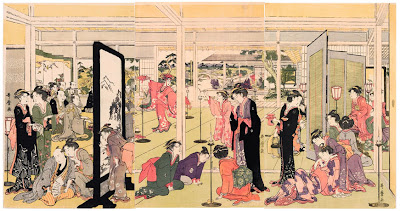 and utamaro features him (lower left), in his own element, even in his own style.

posted by lotusgreen at 9:14 AM 0 comments

when i first made this little collage, a selection of fabric designs from one single series by one single artist, i wanted to learn what i could about the artist, with regard to, as we were discussing. fashion and designers and such.

did the same artist who made this set of prints design both the fabrics and the clothing made up of them? (click the image several times to see full-size -- there is one print from the series below)

i learned nothing about this at all! what i learned about was this amazing character of an artist, author, poet, and general scalawag named iwase sei.

this was not a name he used, however, in any of his artistic endeavors. the name he used when he was creating this series, a manga purportedly analysing the personalities of all of the courtesans of the yoshiwara (pleasure district) through their calligraphy, was kitao masanobu.

kitao masanobu did very little art, as it turned out (a fact which surprised me since i thought the prints were pretty amazing), though he did become the illustrator for a writer of manga and other fiction named santo kyoden. santo kyoden, however, was also him!

as the japanese middle class had grown starting in the late 1600s, a market had arisen for materials about the yoshiwara, the "floating world" (which was off-limits to most men). iwase sei, who was active in the 1700s joined the likes of ihara saikaku and all of the ukiyo-e artists to fill this market. his titles offered ways for a gentleman to win admiration from a courtesan, and similar techniques.

i mentioned the crackdown on these artists discussing utamaro's shackling, and the same thing happened to this guy. when released, however, apparently he went on to become one of the instigators of modern fiction in japan. he also married two different wives, each a licensed worker of the yoshiwara. 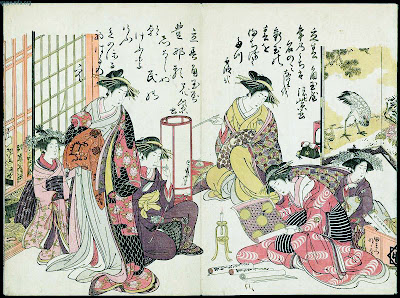 posted by lotusgreen at 1:47 PM 0 comments

Early in the Morning

While the long grain is soft- ening
in the water, gurgling
over a low stove flame, before
the salted Winter Vegetable is sliced
for breakfast, before the birds,
my mother glides an ivory comb
through her hair, heavy
and black as calligrapher's ink.

She sits at the foot of the bed.
My father watches, listens for
the music of comb
against hair.

My mother combs,
pulls her hair back
tight, rolls it
around two fingers, pins it
in a bun to the back of her head.
For half a hundred years she has done this.
My father likes to see it like this.
He says it is kempt.

But I know
it is because of the way
my mother's hair falls
when he pulls the pins out.
Easily, like the curtains
when they untie them in the evening.

(Li-Young Lee was born in 1957 in Jakarta, Indonesia, of Chinese parents. In 1959, his father, after spending a year as a political prisoner in President Sukarno's jails, fled Indonesia with his family. Between 1959 and 1964 they traveled in Hong Kong, Macau, and Japan, until arriving in America. Rose, the book from which this poem is taken, was published by BOA Editions, Ltd. upper left: utamaro kitagawa; edgar degas; gotosei kunisada; henri-edmond cross; utamaro kitagawa; edgar degas; gotosei kunisada.)