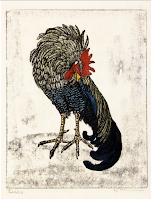 as van gogh wrote to his brother, 'i think the drawing of the blade of glass and the carnation and the hokusai in *bing's reproductions are admirable... isn't it almost a true religion which these simple japanese teach us, who live in nature as though they themselves were flowers.'

what van gogh probably didn't know was that in japan 'precise rules had been laid down governing the drawing of animals and plants.' through a combination of historical documents and close observation, the artists were required to produce drawings that were 'accurate enough to satisfy a zoologist,' and in doing so revealed their closeness to nature, unlike the europeans who seemed to survey it from afar. 1

the japanese portrayal of animals and plants were true to life but not naturalistic. one found in them a deeper significance, a symbolic element beyond the artistic intent. as a part of historical religions in the area every living thing was both itself, and a representation of the essence it embodied. 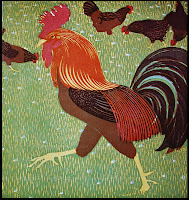 in japan, the cock symbolized high esteem. it is also suggested that the bird acquired a religious significance as a representative of peace and the coming of dawn. 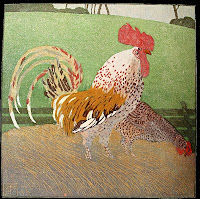 the tale of the rooster who made the sun come up is legend; the one with which i am most familiar is the story of chanticleer and the fox, which began with chaucer if not before. two rival inflated egos at the job of trickstering each other, to both the success and the failure of each.

to my eyes, the cock's greatest conceit is his beauty. how graphically dramatic is that bright red against the black or white of the rest of the bird. even in the more multi-colored birds the comb, the tail, and the attitude delight us, and make us laugh with bit of awe. 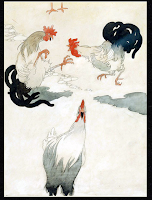 Is that a
rooster? He
thrashes in the snow
for a grain. Finds
it. Rips
it into
flames. Flaps. Crows.
Flames
bursting out of his brow. 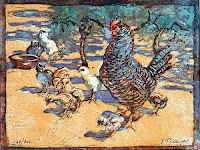 How many nights must it take
one such as me to learn
that we aren’t, after all, made
from that bird that flies out of its ashes,
that for us
as we go up in flames, our one work

is
to open ourselves, to be
the flames?

Galway Kinnell
from Another Night in the Ruins from Three Books. Copyright © 2002 by Galway Kinnell. All rights reserved.