birds in our transitions 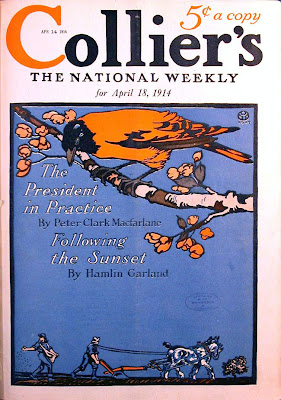 edward penfield (collier's cover here; plus many harper's covers), will bradley and louis rhead were illustrators, designers and poster makers at the turn of the century. their work was exhibited with the japanese prints that were being imported to the us, and the style of each became strongly influenced by the prints. we see the same flat expanses of color interceded by rich pattern, and the asymmetrical layouts.

speaking of penfield (though they could have been speaking of any of the three), publisher's weekly said,
"The advertising poster has within recent years actually soared into the regions of art." Penfield is also credited with bringing abstraction to commercial art through his boldly simplified shapes. This and other stylistic trademarks resulted from a distillation of a number of influences, including the compositional precepts and casual poses found in Japanese prints, the hand-craftsmanship of the Arts and Crafts movement, the impressionistic approach of Parisian poster-making, and British poise and directness. "* 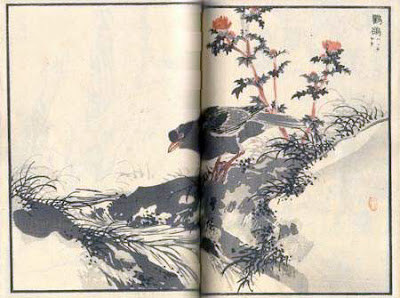 bairei kono was a printmaker/painter who lived and worked in kyoto during the meiji period. he was also an influential teacher.

his two main bodies of work for which he is remembered are the seasonal documenting of birds and flowers, and another, called 'one hundred flowering plants,' published after his death.

posted by lotusgreen at 8:27 AM 0 comments posted by lotusgreen at 7:10 PM 5 comments 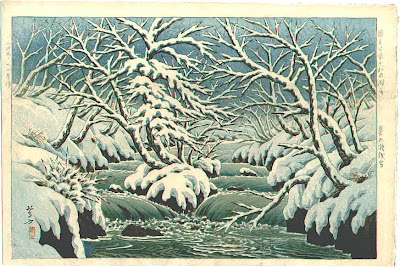 okay, after going through all 1,007 images that one pulls up when doing a search for 'snow' on artelino, i am of the conclusion that.... there are no shadows in japan!!! 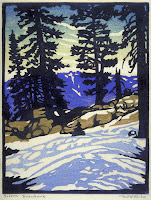 or maybe it's that part of the look of the japanese prints during most of the time we're talking about here that shadows were not displayed.

of course it was the posts on the 18th and 19th that got me started looking (and here i'm using different william rice (above right) and walter j phillips (above left) images which illustrate the same fondness we westerners seem to have with blue shadows).

the shadowless one on top is by takashi ito.

posted by lotusgreen at 6:17 PM 3 comments 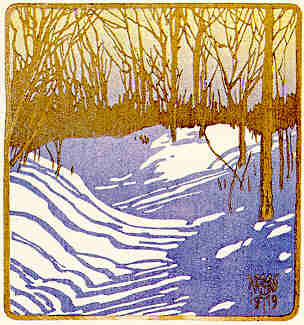 i am struck by the similarity between this walter j phillips image and the william rice image just below. well, same times, same motiva- tions. can't find a japanese print from which these could be a direct descen- dant, but there's time.... 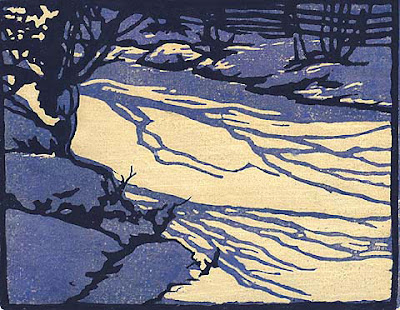 William Seltzer Rice began his art career as a watercolorist. At the Panama Pacific International Exposition of 1915, in San Francisco, Rice became interested in the art of Japanese prints. From that time on he worked almost exclusively with woodblocks, though he relied on watercolors and pastels for sketching on location. In the studio he would carve the blocks, apply oil based inks with a sable brush, and press the Japanese paper by hand. 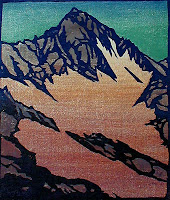 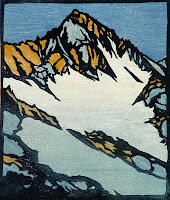 He was the author of three books - Block Prints: How to Make Them (1929), Block Printing in the School (1941), and Portfolio of Block Prints (1932). He taught in the public school systems of the Bay area, and he also taught at the many art societies, including the San Francisco Art Association, the California Society of Print Makers, and the Prairie print Makers.

Rice wrote about his philosophy of printmaking and said:

...the viewpoint of the artist differs from that of the commercial printer. In hand printing, each print has a beauty and individuality of its own. The aim is not to produce editions in large quantities, all alike and uniform, but to obtain slight variations which give a personal character to each print. The making of color prints of this type is essentially a painter's performance. There is a great fascination about color experimentation. The real pleasure comes from seeing the same subject appear in different colors, the design gaining in interest with each new color scheme. Wonderful color effects may be obtained by continual experiments. It would almost seem, sometimes, that no block has ever spoken its last word when it comes to its final color scheme.1

rice was clearly not the only one who felt that way, as these charming images by arthur wesley dow, and yoshida hiroshi illustrate.
blueinall

posted by lotusgreen at 8:12 PM 0 comments

between the earthquake and the war 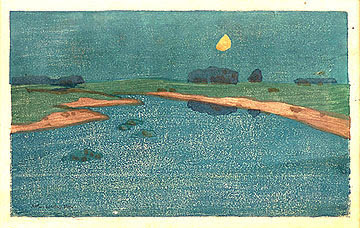 arthur wesley dow created this work several decades before hasui kawase created his, but perhaps both were responding to the onrush of modernity, gatekeepers, both of them, of an imagined past.

or perhaps both just reporting on what they saw. like the impressionist painters, hasui didn't create his images in a studio, but rather on his constants travels in search of beautiful vistas. still preferring a kimono, he wandered the countryside, staying at inns and hunting for "live" views. by the time he done this image of shichiri beach in soshu, kawase had already lost everything once: in a 1923 earthquake that killed 140,000 people, and that had destroyed everything in watanabe's publishing house (along with the work of many other shin hanga artists as well.)

everything was lost again in the bombing of tokyo in WWII. as they had once before, hasui kawase and watanabe shozaburo rebuilt again.
blue apple pie