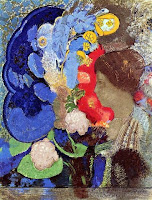 in a fact almost unbelievable to me, redon drew only in black and white until he was sixty. his turn to color, which no one explains, brought to him finally the recognition and wealth he'd always craved. 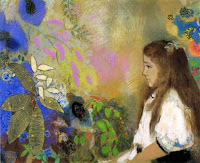 we've also seen his own influence on the japanese from the impressionist phase that hit japan much like theirs did western artists. but nowhere do i find the recognition of the influence of the japanese on his color work.

He was 60 years old when he abandoned the black and white of his graphic work and turned instead to oils and pastels. He began expressing himself in radiant colours, in visionary subjects, flower paintings and mythological scenes (The Chariot of Apollo was one of his favourite themes). In particular, his flower paintings were well received by Matisse. The Surrealists found Redon's work fascinating, as they, too, took their inspiration from dream imaginary and the subconscious. Furthermore, he had a number of young artists that admired his work greatly, which made a significant impact on Redon. 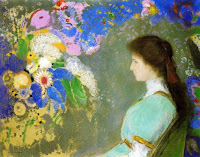 Redon himself interpreted his later adoption of colour as follows: 'In ceaselessly making myself more objective,' he wrote in 1913, 'I have since learned, with my eyes more fully open on all things, that the life that we can unfold can also reveal joy. If the art of an artist is the song of his life, a grave or sad melody, I must have sounded the note of gaiety in colour.' Of his 'noirs' he wrote, 'They were executed in hours of sadness, of pain and ... for this reason, are probably more expressive. Sadness, when it is without a cause, is perhaps a secret fervour, a sort of oration, something vaguely like worship, in the unknown .' 1

whatever odilon (which has got to be the most beautiful first name ever) said, or what others interpreted as, for example, 'the quest for meaning in the slow and gradual process of seeking synthesis between the certain and the uncertain, between physics and metaphysics.' (redon, seurat, and the symbolists), another influence appears right before our eyes. 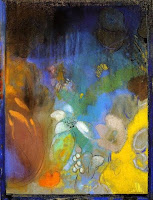 if redon's creative sources had begun to revolve around the communication between human and nature, namely flowers, if woman could become indistinguishable from flower or at least exquisitely in tune, there is no contradiction in the japanese work.

while the japanese may be more ecumenical, women, men, men playing women, etc., the result is quite similar. in portraying his subjects garbed in flowers, and surrounded by gigantic flowers, larger in the scheme of things than the humans themselves, the japanese artists are also revealing that space in which people are indistinguishable from nature rather than separate from it. 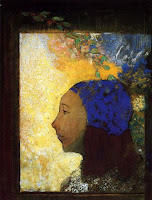 this perception has never been popular in the west; it still isn't. but then only the smallest minority of people in the west take lessons from the arts; most would rather find the artists the madmen and the fools than themselves.