a poem as long as California

What are you thinking about?

I am thinking of an early summer.
I am thinking of wet hills in the rain
Pouring water. Shedding it
Down empty acres of oak and manzanita
Down to the old green brush tangled
in the sun,
Greasewood, sage, and spring mustard.
Or the hot wind coming down
from Santa Ana
Driving the hills crazy,
A fast wind with a bit of dust in it
Bruising everything and making the seed sweet.
Or down in the city where the peach trees
Are awkward as young horses,
And there are kites caught on the wires
Up above the street lamps,
And the storm drains are all choked with dead branches.

What are you thinking? 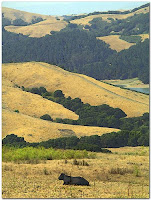 I think that I would like to write a poem that is slow as a summer
As slow getting started
As 4th of July somewhere around the middle of the second stanza
After a lot of unusual rain
California seems long in the summer.
I would like to write a poem as long as California
And as slow as a summer.
Do you get me, Doctor? It would have to be as slow
As the very tip of summer.
As slow as the summer seems
On a hot day drinking beer outside Riverside
Or standing in the middle of a white-hot road
Between Bakersfield and Hell
Waiting for Santa Claus. 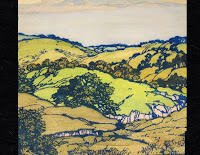 What are you thinking now? 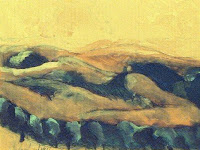 I’m thinking that she is very much like California.
When she is still her dress is like a roadmap. Highways
Traveling up and down her skin
Long empty highways
With the moon chasing jackrabbits across them
On hot summer nights.
I am thinking that her body could be California
And I a rich Eastern tourist
Lost somewhere between Hell and Texas
Looking at a map of a long, wet, dancing California
That I have never seen.
Send me some penny picture-postcards, lady,
Send them.
One of each breast photographed looking
Like curious national monuments,
One of your body sweeping like a three-lane highway
Twenty-seven miles from a night’s lodging
In the world’s oldest hotel. 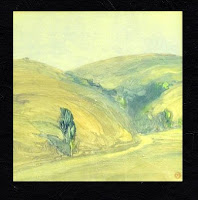 What are you thinking? 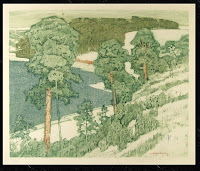 I am thinking of how many times this poem
Will be repeated.
How many summers
Will torture California
Until the damned maps burn
Until the mad cartographer
Falls to the ground and possesses
The sweet thick earth from which he has been hiding. 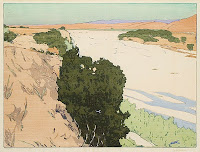 What are you thinking now?

I am thinking that a poem could go on forever.

Forthcoming from The Collected Poetry of Jack Spicer
from Wesleyan University Press.

posted by lotusgreen at 9:03 PM 2 comments

rain for roxy, whenever she wants it 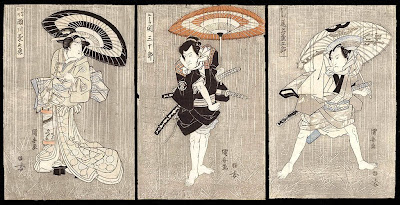 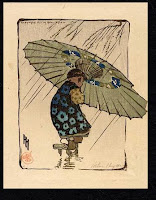 I'M ONLY HAPPY WHEN IT RAINS 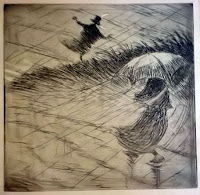 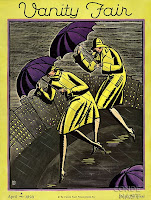 You can keep me company
As long as you dont care 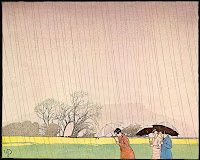 (don't miss tom hanks' version of 'singing in the rain'
in the movie punchline.)

posted by lotusgreen at 3:59 PM 4 comments

the birth of clouds THE SENSE OF THE SLEIGHT-OF-HAND MAN

One’s grand flights,
one’s Sunday baths,
One’s tootings at the weddings of the soul
Occur as they occur.
So bluish clouds
Occurred above the empty house and the leaves
Of the rhododendrons
rattled their gold,
As if someone lived there.
Such floods of white
Came bursting from the clouds. So the wind
Threw its contorted strength around the sky.

Could you have said the bluejay suddenly
Would swoop to earth? It is a wheel, the rays
Around the sun. The wheel survives the myths.
The fire eye in the clouds survives the gods.
To think of a dove with an eye of grenadine
And pines that are comets, so it occurs,
And a little island full of geese and stars:
It may be that the ignorant man, alone,
Has any chance to mate his life with life
That is the sensual, pearly spouse, the life
That is fluent in even the wintriest bronze.

“The Sense of the Sleight-of-hand Man” from Collected Poems.
Copyright 1923, 1951, 1954 by Wallace Stevens.
Reprinted with the permission of Alfred A. Knopf,
a division of Random House, Inc. Source: Poetry (July 1939). 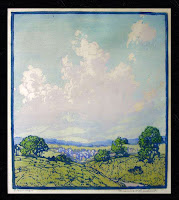 what a strange day.

at long last i noticed that japanese prints, in addition to only very rarely featuring shadows or reflections, as we've discussed before here and here and here, only rarely have clouds!, certainly never, until the shin hanga artists gave them birth, as sunset, billowing, nor multi-colored. 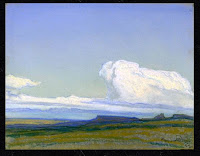 when clouds did appear, they were almost exclusively used to augment a painting of a mountain, an evidence of heights. the mountain were subject, and the clouds servants. certainly no images of clouds for the sake of the clouds, as one might often see waves for the sake of water.

so i found myself wondering: if shadows and reflections were not included because of their ephemeral nature, as we've read in several places now, then is perhaps the same true of clouds?

i could find nothing online nor in my books (what ever happened to indexing???!), so i decided to call "the experts." i tried tracing down curators of japanese prints at various museums, but when i found only dead ends, i started phoning dealers, some of whom are listed in the sidebar here, and essayists i know from online. and to a man (yes, deliberate usage) they said the same thing:

"its not true that there are few shadows or reflections in japanese prints!" "but but," i say, "what about the idea about excluding them because they're too ephemeral?" "where do you get these ideas?" (annoyed? angry?) "and then when shin hanga came along....," i struggled, clinging to straws. the final guy had the nerve to tell me i really needed to look at more than a basic ukiyo-e collection. had no idea whatsoever of what's online now,
not to mention on my bookshelves.

my index-less books, though, again were no help. which is why the gods invented the internet: 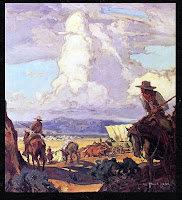 "While van Gogh never specifically referred to optics, his remark that the Japanese "take reflections for granted" illustrates he was aware of the issue. The Sunflowers, Bridge at Arles, and the Harvest at La Crau, and the other images that painted that year all have something in common with each other and with the Japanese print. They convey a visual rather than an optical effect. 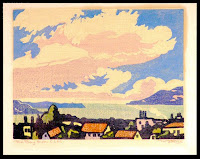 "What is the difference between them? As we saw, Van Gogh eliminated clair-obscure from his painting. Clair-obscure, of course, is the result of light, or, more specifically, light external to the picture. When he banned shadows from his paintings, and used flat, "artificial" colors, he also eliminated external light from the picture. The Sunflowers, just like the shadowless Japanese print, has neither a light source nor shadows. The light in the painting is "internal." By using color as an independent reality -- independent of optical perception -- it followed that the painting assumed an independent reality. The painting is no longer an optical facsimili of the visual world, it was a reality in its own right. 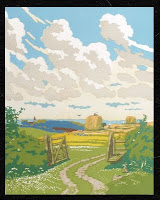 "The idea to treat a painting as a reality in its own right, of course, became the hallmark of the Modernist Revolution. The realization that a picture, before it is anything else, is an independent reality – a two-dimensional artifact – is still topical. Not only painting but contemporary electronic media are first and foremost two-dimensional, artificial media that are visually more expressive when treated as such. If contemporary Japanese imagery seems to have an unusually clarity, the reason is no doubt that the eye of the Japanese artists was never blurred, as it were, by the filter op naturalism. Esthetically speaking, Japan's traditional culture already possessed some eminently modern characteristics." 1

"Monet's early paintings show the influence of the flat planes of bold colour, asymmetric compositions, and telescoping of foreground and distant views with no middle distance – features characteristic of 19th-century Japanese woodblock prints.... Hiroshige's One Hundred Famous Views of Edo (1856-58) is characterised by its unusual viewpoints. Evening View of Saruwaka Street (1856) in the Kabuki theatre district of the city, with its European linear perspective and single vanishing point, is the most overtly realist view in the series. Its most unusual feature is Hiroshige's use of shadows, rarely seen in Japanese art, that produce an eerie quality." -- Colin Martin

"artists who worked the aforementioned style circa 1860, shows the integration of western stylistic elements, such as shadows and perspective, juxtaposed to the typical elements of the ukiyo-e." 2

so you tell me. what are these guys talking about?
like i said, the weirdest day!

posted by lotusgreen at 8:51 PM 6 comments